An R. Kelly accuser broke down in tears Monday as she testified in the federal racketeering trial of the disgraced R&B star. Using a pseudonym to testify anonymously, the woman cried as she claimed she contracted herpes during her relationship with the singer, and that she believes Kelly knowingly exposed her to it.

Federal prosecutors in New York have accused Kelly of operating a criminal sex trafficking network composed of his managers, bodyguards, drivers, assistants and others who recruited minor females and women at concert venues where he was performing and other locations. Once Kelly had the accusers alone, he “dominated and controlled them physically, sexually and psychologically,” Assistant U.S. Attorney for the Eastern District of New York Maria Cruz Melendez claimed during the trial’s opening statements in a Brooklyn courtroom Wednesday.

Kelly has pleaded not guilty to all charges against him and has steadfastly maintained his innocence, including in an explosive 2019 interview with “CBS This Morning” co-host Gayle King. His defense attorneys have blasted the alleged racketeering enterprise as an overreach by prosecutors, saying in one court filing the women sought out Kelly’s attention and years later have “groupie remorse.” Kelly’s attorney, Nicole Blank Becker, on Wednesday claimed that the relationships were consensual and said that the women enjoyed the “notoriety of being able to tell their friends that they were with a superstar.” 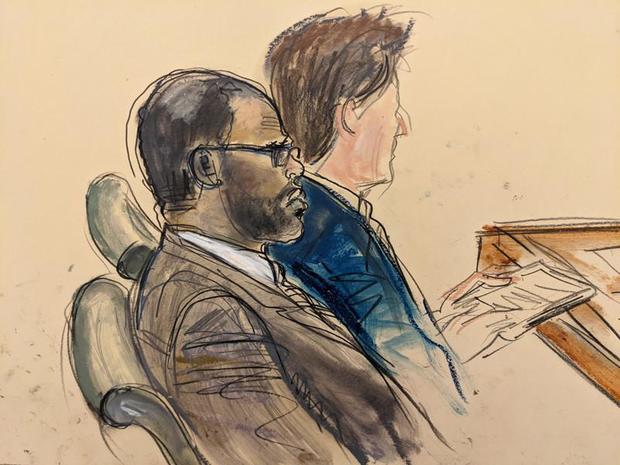 The accuser on Monday testified that she met Kelly in April 2015, when she was 17, during a concert that she attended with her parents. She said a member of Kelly’s entourage gave her a wrist band to get closer to the stage, and that she was given a note with Kelly’s contact information. The woman, who said she was a musical artist and wanted Kelly to critique her work, contacted Kelly via FaceTime and then met up with him at a hotel. The woman said they engaged in sexual activity after Kelly “continuously tried and peer pressured” her to have sex before he would critique her music.

The woman, who said she told Kelly she was 18, said she had no romantic interest in him.

“I just wanted to sing,” she said. “I genuinely wanted his input.”

The woman then said that, after their initial encounter, Kelly’s assistant arranged for her to travel to California, Las Vegas, Georgia, Chicago and Connecticut. The woman alleged she had sexual contact with Kelly almost every day over the next few months.

During her testimony, the woman became overwhelmed with emotion as she described experiencing pain in her pelvis and abdomen that she claimed grew so bad that she could hardly walk. She said she was diagnosed with vaginal herpes, and that when she informed Kelly, he was “agitated” and responded that anyone could have given it to her. The woman said Kelly never told her that he had a sexually transmitted disease, and that she felt “devastated” because, as she alleged, Kelly, “purposely gave me something he knew he had, that he could’ve controlled.”

The woman said that while she was with Kelly she was instructed to wear loose fitting clothing and call him “Daddy,” bolstering the prosecution’s case that Kelly enforced strict rules for the women he abused.

The woman said she would sometimes stay on Kelly’s tour bus, where she needed his permission to leave the restroom after using it. She said Kelly physically abused her when she broke his “rules,” claiming the singer beat her with a sneaker in his Atlanta home until she admitted she had texted a high school friend details about their relationship. In another incident in Chicago, she said that Kelly punished her for buying clothes he felt were too small by forcing her to stay in a room for three or four days until she admitted she should have purchased larger clothing. The woman said the door to the room was unlocked, but claimed that if she tried to leave she would “get in more trouble.”

Prosecutors have alleged that Kelly confined accusers against their will, only allowing them to leave with his permission.

The woman testified that she witnessed Kelly slapping, beating and dragging other women by the hair at his home if they broke his rules. She said she had sex with other women at Kelly’s request because she knew Kelly would punish her if she refused. Kelly, she said, forced her and other women living with him to write false letters asserting that they’d stolen from him and had been abused by their own families. Prosecutors argue that Kelly used the letters and videos of sexual encounters as a means of controlling the women and keeping them quiet about the abuse.

The woman said the sexual encounters, which she claimed Kelly frequently filmed, left her feeling “humiliated.” She also recounted an instance in which she alleged Kelly once pressured her into sex while a member of his entourage was asleep in the same room with them in Las Vegas.

According to her testimony, the woman told Kelly in the summer of 2015 that she was really 17. She alleged that Kelly slapped her in the face with an open palm when she told him and that he instructed her to go back to her home state of Florida while he consulted his lawyers. She testified that he later suggested she be homeschooled and live with him in Chicago. She said he received written permission from her parents to stay with him and they then continued the sexual relationship.

The woman became emotional when she said Kelly impregnated her in 2017, when she was 18. She said she didn’t want to terminate the pregnancy, but she said she was coerced into getting an abortion and one of Kelly’s assistants accompanied her to the procedure.

The woman’s testimony follows the account of another accuser last week who said Kelly physically and sexually abused her during a relationship that started when she was a 16-year-old fan in 2009.

Known for his 1996 song “I Believe I Can Fly” and other chart-topping hits, Kelly has for years faced allegations of sexual abuse, which he has denied. He was acquitted in 2008 of child pornography charges after a key witness did not testify. Multiple women later came forward with accusations of abuse in the 2019 Lifetime docuseries “Surviving R. Kelly,” prompting public outcry over the allegations amid the #MeToo era. The singer was charged with federal sex crimes in New York and Chicago the same year.

The 54-year-old Kelly also has pending criminal cases in Minnesota and Illinois. He has pleaded not guilty. His racketeering indictment includes underlying counts of sexual exploitation of a child, bribery, kidnapping, forced labor and violations of the Mann Act, which criminalizes the transportation of women and girls for any “immoral purpose.” He faces 10 years to life in prison if he is convicted in the New York case.