Disney made a 1982 film about the famous East German balloon escape of 1979, however this latest German version is perhaps a reappropriation.

Whatever your politics, the German Democratic Republic was a political obscenity by the early 1960s when they constructed the wall to keep their own citizens in, rather than everyone else out. About 3.5 million 'Ost' citizens had already voted with their feet and gone west before that. To stem the flow the border guards had orders to shoot to kill; anyone who made it past the minefields was usually finished off by sharpshooters or the diabolical SM-70 directional mines attached to the fence. We see the effects of one of these in a prelude of the new movie as someone tries to scale the fence using meat hooks. 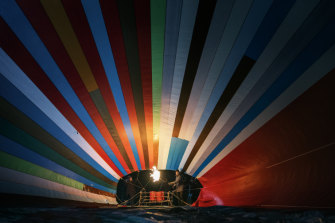 The partisanship here is a matter of style. The story takes place almost entirely in a small community in southern East Germany, near Jena. Two families have laboured in secret for two years to construct a home-made hot-air balloon, sewn together on a manual sewing machine. They are going to use it to cross the border at night into West Germany, if they can just get the science right – weight, height, trajectory, winds – not to mention their own nerves.

This really happened. Peter Strelzyk (played in the film by Friedrich Mucke) and Gunter Wetzel (David Kross) experimented over many months. Peter was an electrician and former air force mechanic; Wetzel was a bricklayer by trade but a dab hand with a sewing machine.

In the movie, they are constantly looking over their shoulders in a society obsessed with surveillance. Both wives are supportive but terrified of the border guards and their rifles. We are risking our children's lives, says Doris Strelzyk (Karoline Schuch). She also remembers her awful homesickness as a child: will we ever be able to come back to see our relatives? Petra Wetzel (Alicia von Rittberg), desperate to see her mother in the west, fears the wire and rope gondola will never carry four adults and four children. Thomas Kretschmann, the biggest name actor here, plays a Stasi colonel who comes looking for them after their first botched attempt.

The film is a solid political thriller, with good edge-of-the-seat tension if you don't mind everything slightly over-cooked. By that I mean that the director employs a full suite of tricks to keep us guessing and these can become quickly tiresome. A classic example of this is the old 'Stasi-cars-racing-to-pick-up-our heroes' routine, where they think they have found their targets. Of course they end up knocking at the wrong door. Mein Gott, that was close! That kind of manipulation is so old it's quaint, like the late '70s East German threads the cast has to endure.

The casting is strong but equally obvious. Outside the families, most of the neighbours are suspicious-looking customers. If they work for the Stasi they are either fat, cruel and stupid, or thin, mean and twitchy. When a state official appears on screen the music becomes foreboding – like the Darth Vader march, but a bit more Wagner.

The director Michael 'Bully' Herbig is a household name in Germany as a broad comedian. His long-running TV show pokes fun at German cultural icons. One of his most beloved characters is his version of Winnetou – a noble red man who featured in a series of hugely popular German 'spaetzle' (dumpling) westerns in the 1960s. Herbig's Winnetou is a sibilant camp character in sequins and a feather – imagine Dick Emery in moccasins and suede.

There isn't much room for comedy in Balloon, although a smidgen of satire in some early scenes points to how the movie might have been more tonally complex. It's easy to see why Herbig plays it relatively straight. This is victory propaganda, by and large, a retelling of a famous German story as a modern fairytale: how two noble families set out to flee the wicked East on a puff of hot air and a dream of freedom. Old cold warriors will find their cockles warmed: those were the days!