Priyanka Chopra and Nick Jonas do not have babies on their minds right now. The newlyweds were asked that expected question when they hit the Isn’t It Romantic premiere pink carpet on Feb. 11. And Priyanka Chopra’s comments about having kids with Nick Jonas are a pretty fair answer. Just because they got married fast doesn’t mean they’ll be bringing any little ones into the world just as quickly.

Chopra and Jonas hit the pink carpet together on Monday, Feb. 11, to celebrate the debut of Isn’t It Romantic, which releases just in time for Valetine’s Day. The film stars Rebel Wilson alongside Liam Hemsworth, Adam DeVine, and Chopra, and it’s a comedic twist on the classic romantic comedy structure. All of the stars of the film showed up for the premiere (minus Hemsworth, who was unfortunately out sick). And while on the event’s pink carpet, Chopra was asked about babies.

“We both know that that’s something that needs to happen, but it’s not something I think about very much," Chopra revealed. "We’re both very driven, we love our work, we’re married to our work, and we’re both very supportive of each other’s work. So I’m sure it will happen in an organic way.”

TBH, I feel like it’s way too early to be asking this couple those questions anyways. They just got married in December, fam! Let them breathe! 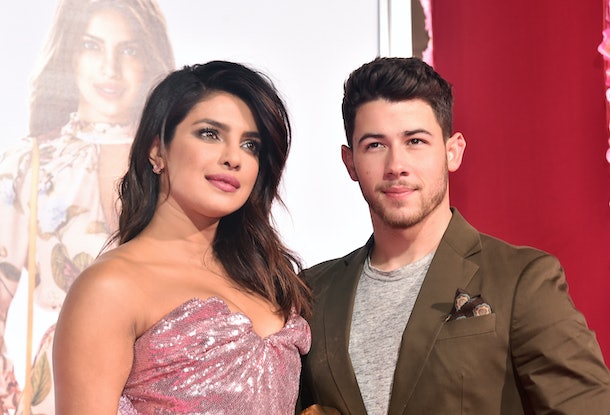 In a previous interview with People just after they got married, Chopra and Jonas talked about the possibility of future children.

“I always say, ‘Man proposes, God disposes.’ So I’m not taking any chances,” she said. “We definitely want kids, and when the time is right, it will happen.”

“Let us be married first for a while before we have to make all these big decisions," Jonas chimed in, hitting the nail on the head. "We’re in our honeymoon period right now and we will be for a very long time.”

Another couple that got married in December, are currently in their honeymoon period, and were in attendance (partially) at the Isn’t It Romantic premiere was Miley Cyrus and Liam Hemsworth.

And Cyrus posted the most sexual Instagram caption ever after attending the premiere.

Also, y’all… I don’t know how it took me until this day for it to click that co-stars Priyanka Chopra and Liam Hemsworth are married to each other’s exes, but here I am, dumbfounded at my lateness!!

Twitter couldn’t get over the fact that famous exes Miley Cyrus and Nick Jonas were both at the same movie premiere last night supporting their respective SPOUSES.

Life has come full circle, fellow millennials. It doesn’t appear that the exes crossed paths during the premiere, which is a total bummer because how fun would that have been to see?! But it was a lovely moment to see Jonas and Cyrus both there to support their baes.

You see that? Growth.