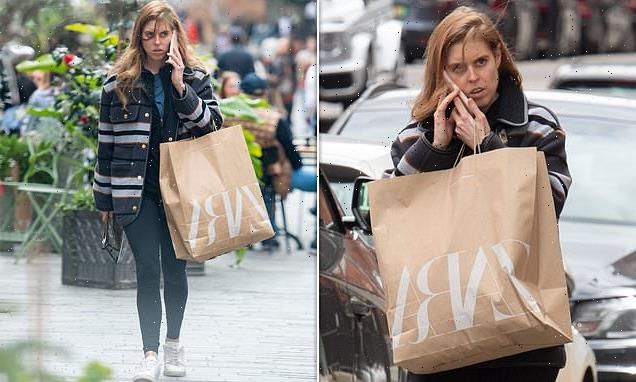 Even royals like Zara! Princess Beatrice, 33, dresses down in leggings and a striped jacket as she chats on the phone after popping to the shops in Chelsea

Princess Beatrice dressed down in a casual jacket and trainers as she headed out to the shops in London on Tuesday.

The Queen’s granddaughter, 33, popped into Zara in Sloane Square and emerged with a giant paper bag of goodies.

It is possible it was full of presents for her stepson Christopher, known as Wolfie, who celebrated his sixth birthday with a party that same day. 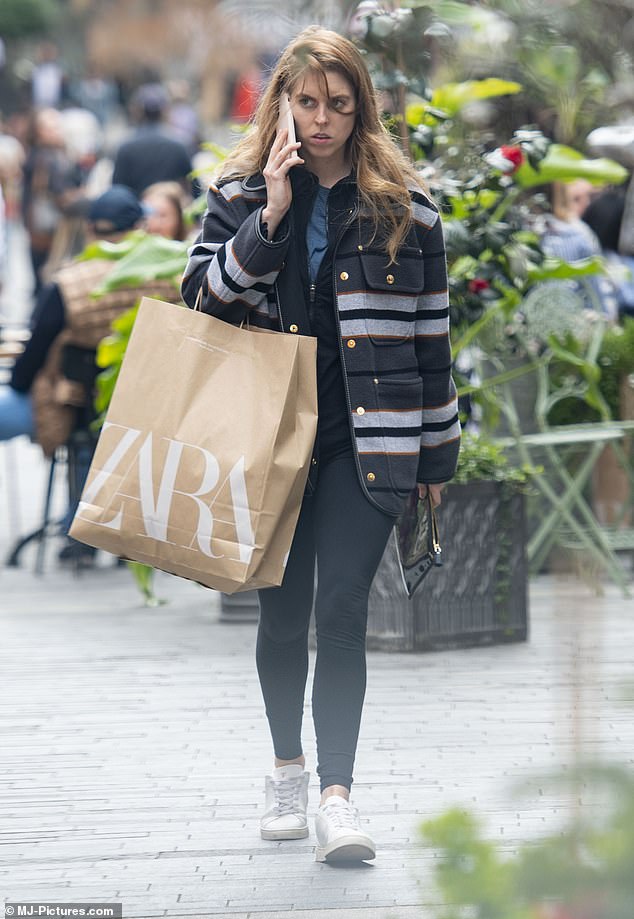 Dressed down: Princess Beatrice was casually dressed in leggings and a jacket for the outing 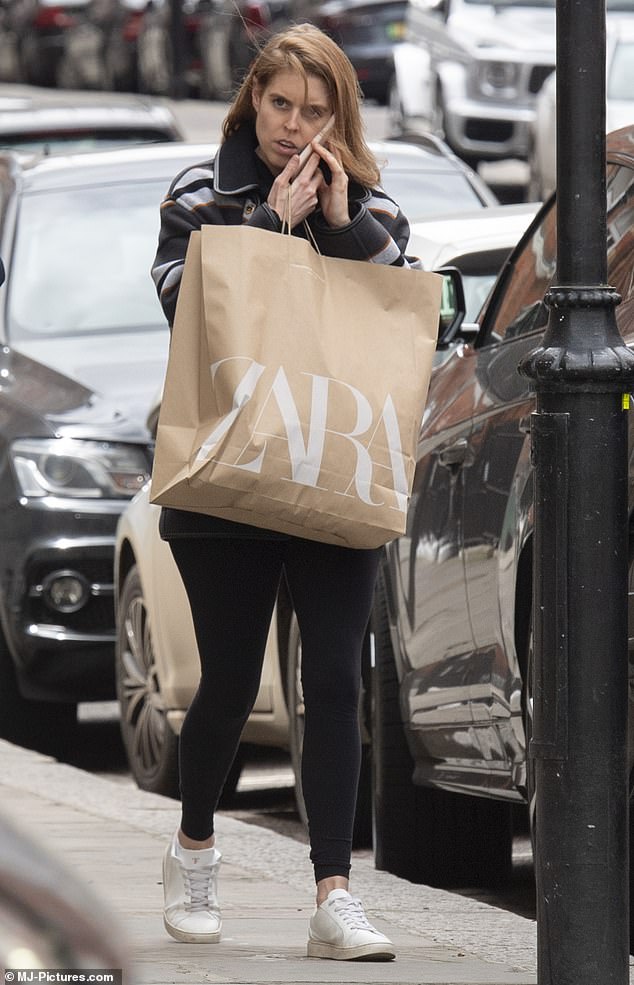 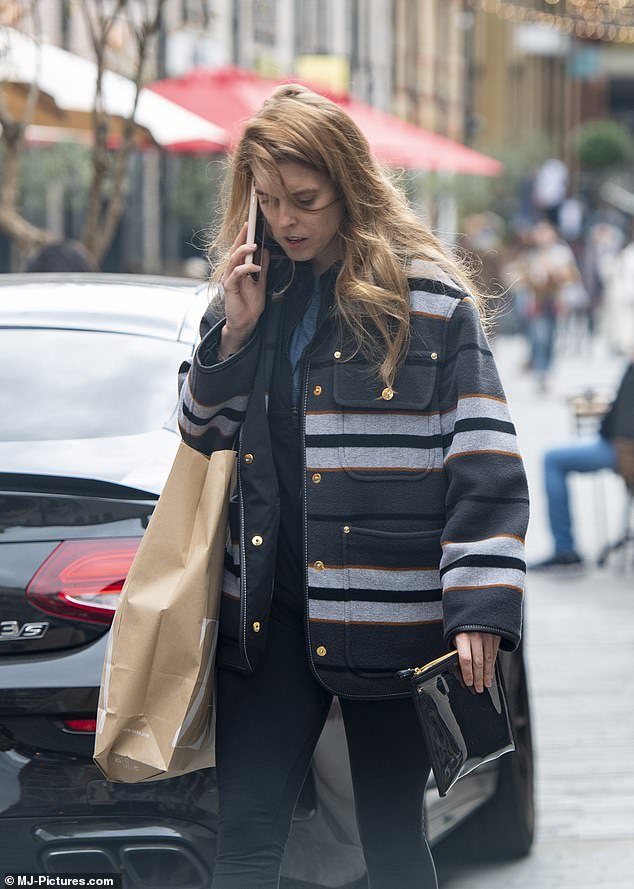 Keeping things casual: Beatrice wore her auburn locks loose and swept over in a side parting 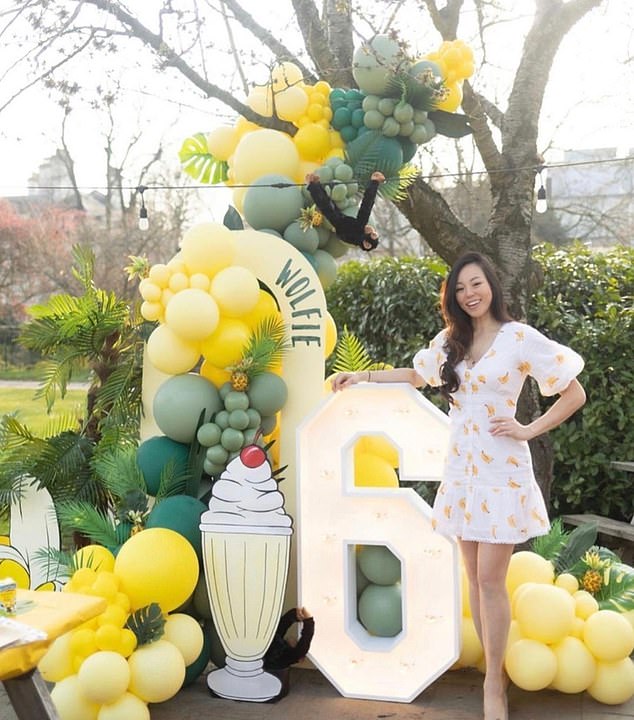 Presents for Wolfie? Beatrice was seen out and about on the same day as stepson Wolfie’s birthday party. His mother Dara Huang this week posted a selection of pictures online documenting the sixth birthday party, including the one above, which were later deleted

Beatrice was spotted chatting on her phone as she made the most of the spring sunshine by strolling down a cafe-lined street to her car.

Typically understated, Beatrice opted for a blue top which she layered under a thin black zip-up and the striped jacket, which had strips of white, blue and burnt copper.

She added a pair of black leggings, white casual trainers and finished the look with a black clutch which she carried in one hand.

Beatrice, who lives with husband Edo and their six-month-old daughter Sienna, kept her makeup to a minimum and wore her auburn locks loose and swept over in a side parting.

Catching up: The Queen’s granddaughter looked engrossed in a conversation as she strolled

Multi-tasking: Beatrice juggled her phone, shopping bag and black clutch as she made her way to her car 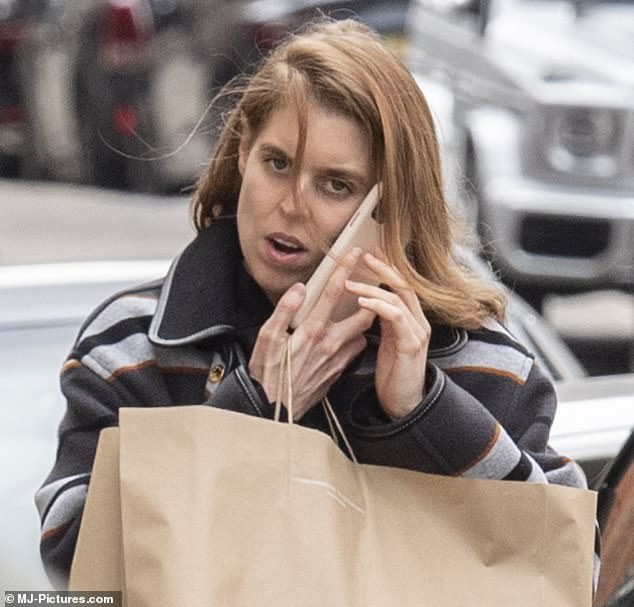 Less is more! Princess Beatrice kept her makeup to a minimum for the low-key outing this week

Putting her best foot forward: The royal opted for a pair of comfortable casual white trainers 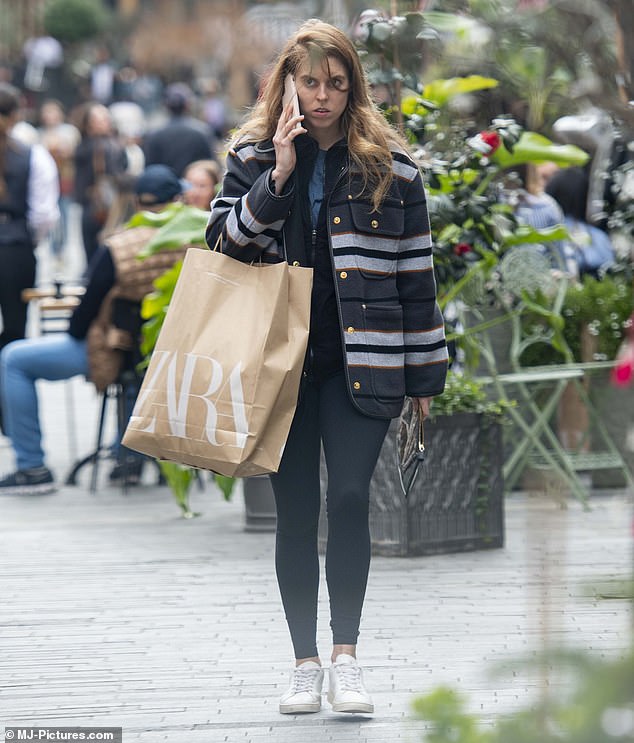 Stocking up for spring? Beatrice, who is known for mixing high street and high end, found a few pieces in Zara on Tuesday

It is not known whether Beatrice and Edo were present for Wolfie’s birthday party at Kensington Palace Gardens.

His mother Dara Huang this week posted a selection of pictures online documenting his big bash but within hours the joyous snaps were swiftly removed and deleted by Dara, who offered no explanation as to why she had taken them down.

Dara, a 39-year-old American-born architect who was previously engaged to the Princess’s husband, Edoardo Mapelli Mozzi, was seen posing next to the number six, a yellow arch emblazoned with Wolfie’s name and a festoon of balloons and monkey cuddly toys hanging from the trees. 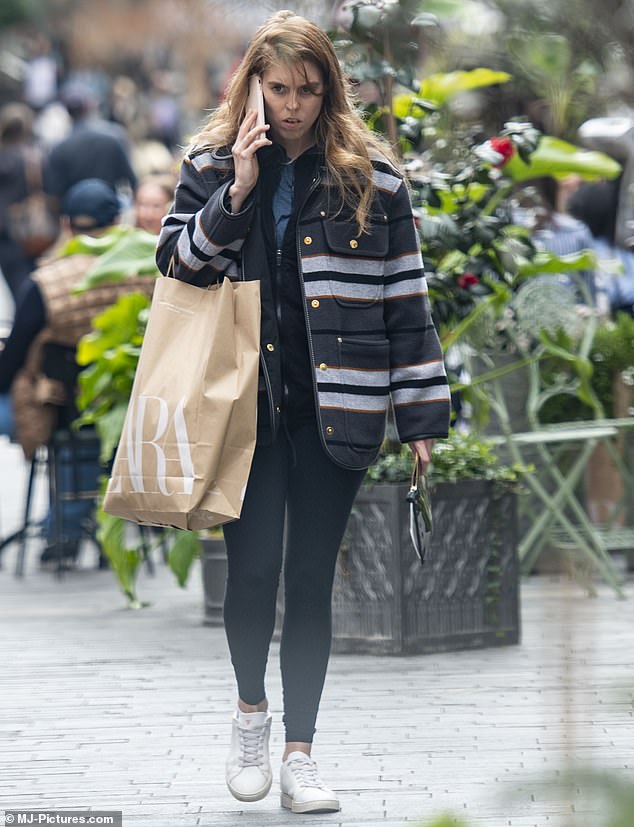 Deep in conversation: Princess Beatrice looked concentrated as she chatted on the phone 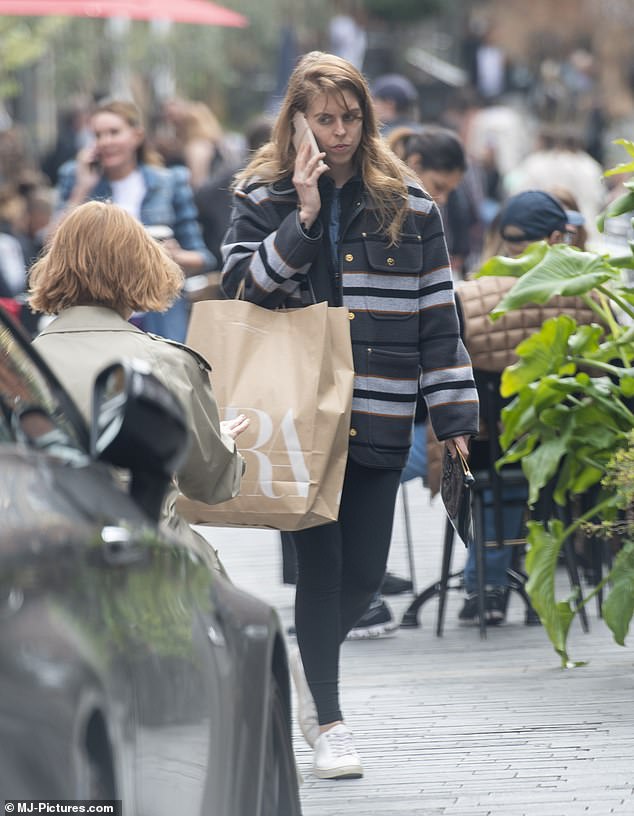 Sunny stroll: Beatrice stretched her legs and made the short walk from the shops to her car 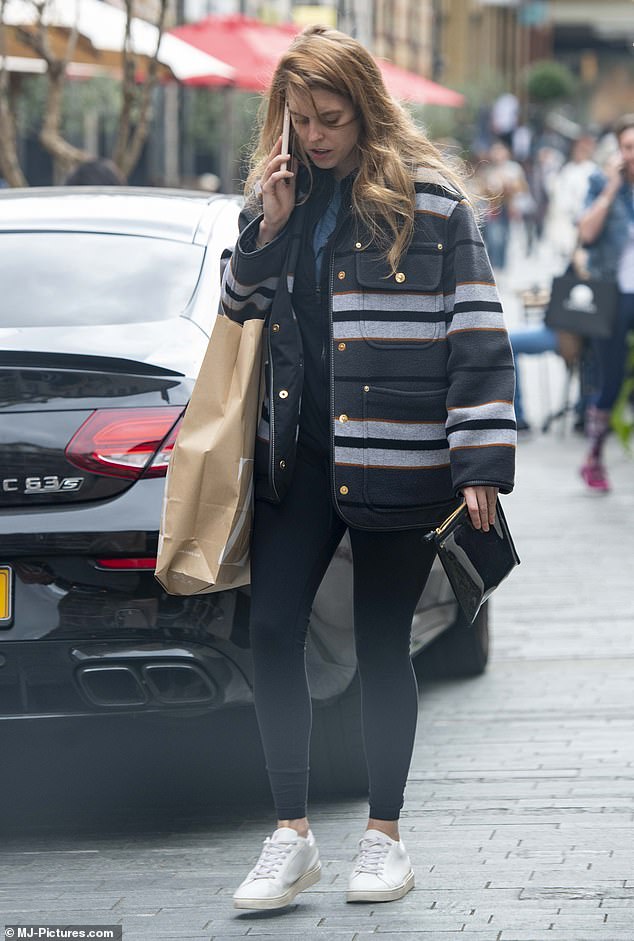 Athleisurewear: The royal delivered a masterclass in casual dressing in her leggings and jacket

Wolfie and his pals were treated to an entertainer who put on a magic show for the children in attendance.

A source told the Daily Mail’s Richard Eden that Dara, who shares custody of her son with property developer Edoardo, ruffled a few royal feathers by geo-tagging ‘Kensington Palace Gardens’ in her social media post about the event.

‘Despite wanting to share Wolfie’s birthday celebrations with her followers, after having a few discussions with loved ones Dara decided it was best to keep Wolfie’s day as a private occasion,’ an insider told him. Dara was unavailable for comment.

The Princess has become so close to Wolfie that she was recently seen wearing a necklace with his initial ‘W’.

And she let him act as best man at her 2020 wedding, even though he was only four at the time. It made him the youngest person in history to have performed a role at a British royal wedding.