You may now kiss the bride! Princess Beatrice and Edoardo Mapelli Mozzi seal their union at their secret wedding in unseen photo sent to royal fans by Sarah Ferguson

Proud mother the Duchess of York has shared an unseen photograph of Princess Beatrice exchanging a kiss with her new husband Edoardo Mapelli Mozzi on her wedding day.

An unseen black and white image of the bride, 32, and her new husband Edo, 36, features on a thank you note sent by Sarah Ferguson, 61, and has been shared to  Instagram.

The note and exclusive picture received by a royal fan was sent by the Duchess of York as a thank you for her well wishes on her daughter’s July wedding day.

The first public kiss is a traditional part of any royal wedding, but fans had been forced to wait to see Beatrice and Edo’s big moment after they tied the knot in a secret ceremony in Windsor on 17 July. 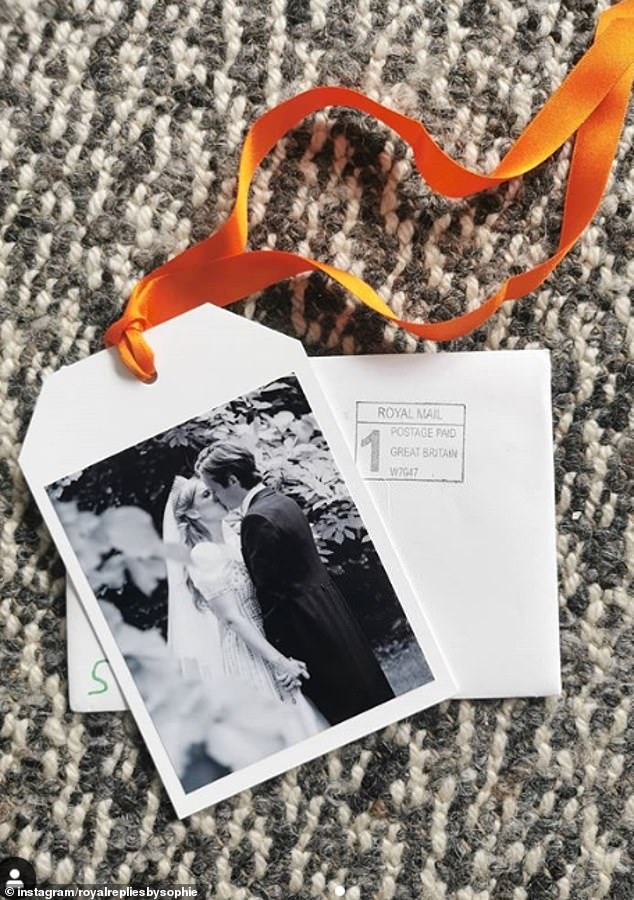 Proud mother the Duchess of York has shared an unseen photograph of Princess Beatrice, 32,  exchanging a kiss with her new husband Edoardo Mapelli Mozzi, 36, on her wedding day

In the picture, the couple could be seen exchanging a tender kiss as they held one another in the grounds of the Royal Lodge.

The newlyweds could also be seen clasping hands as they enjoyed the quiet moment after their intimate summer ceremony.

Meanwhile they also shared a note penned by the Duchess of York read: ‘Thank you so much for your amazingly caring and supporting messages for Beatrice and Edo’s future happiness. 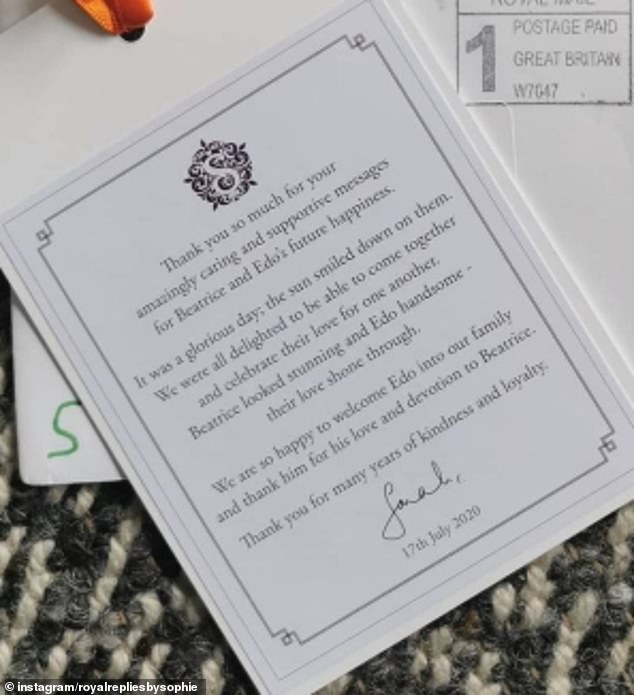 ‘It was a glorious day; the sun smiled down on them. We were all delighted to be able to come together and celebrate their love for one another.

‘Beatrice looked stunning and Edo handsome – their love shone through.

‘We are so happy to welcome Edo into our family and thank him for his love and devotion to Beatrice. Thank you for many years of kindness and loyalty.’

The latest  photograph comes days after another royal fan revealed they had received a different image of the couple on their wedding day. 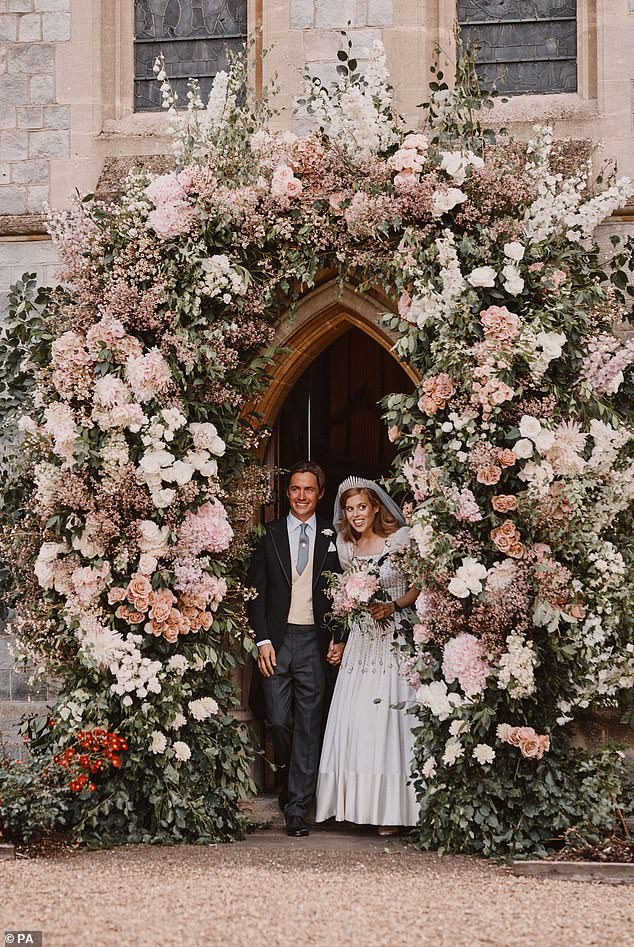 Fergie appears to be sending different images to followers who had penned their wellwishers to the bride and groom after their big day.

Yesterday, another royal fan @coutureandroyals shared new picture sent by Fergie to wellwishers which showed the couple enjoying a quiet moment as they strolled through the garden.

And last week, royal fan Sarah Janes posted her thankyou note to Instagram, sharing a picture of the beaming couple holding hands on the grounds of Royal Lodge.

In the snap, the happy couple shared a smile as they strolled along. 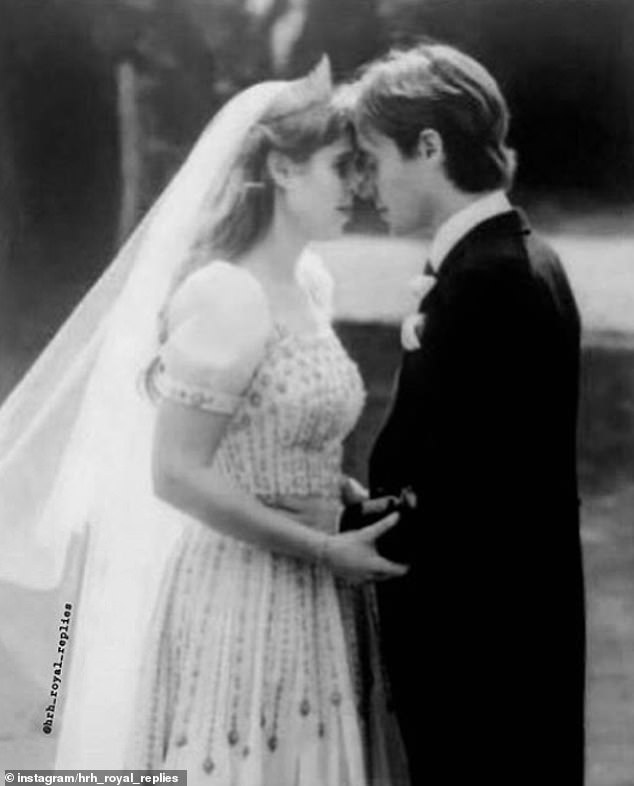 The Queen’s granddaughter was due to marry Edo at St James’s Palace on 29 May but plans were postponed due to Covid-19 – and they instead tied the knot in a surprise secret ceremony at Windsor Castle on 17 July with just twenty guests.

Princess Beatrice and Edo enjoyed a slimmed-down wedding at the Royal Chapel of All Saints at Royal Lodge.

The ceremony details were not made public beforehand and the pair were originally due to marry in the Chapel Royal followed by a reception in the gardens of Buckingham Palace – but their wedding was postponed because of the coronavirus outbreak.

Beatrice’s father the Duke of York walked her down the aisle but he did not feature in the photographs released by Buckingham Palace. The wedding was also attended by The Queen and the Duke of Edinburgh. 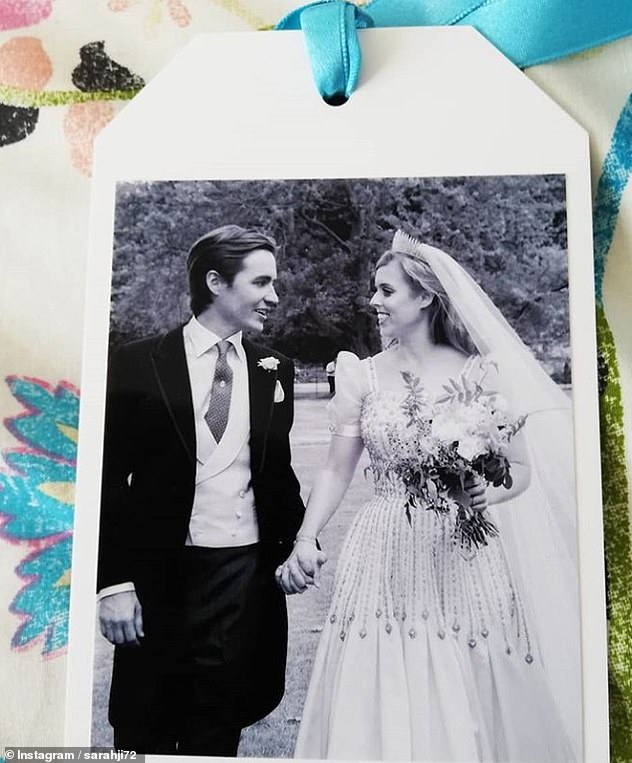 Days ago, another royal fan revealed a never-before-seen picture of Princess Beatrice’s wedding to Edo, sent to her by Fergie

The latest photographs come as the York family celebrate the news that Beatrice’s younger sister Princess Eugenie is expecting her first baby.

The royal, who married husband Jack Brooksbank in October 2018, are expecting the baby in early 2021.

Sharing the news on Instagram last month, Eugenie, 30, wrote: ‘Jack and I are so excited for early 2021….,’ alongside photos of baby slippers and her and Jack smiling.

The baby will be the first grandchild for Prince Andrew and Sarah Ferguson, and will be the Queen and the Duke of Edinburgh’s ninth great-grandchild.