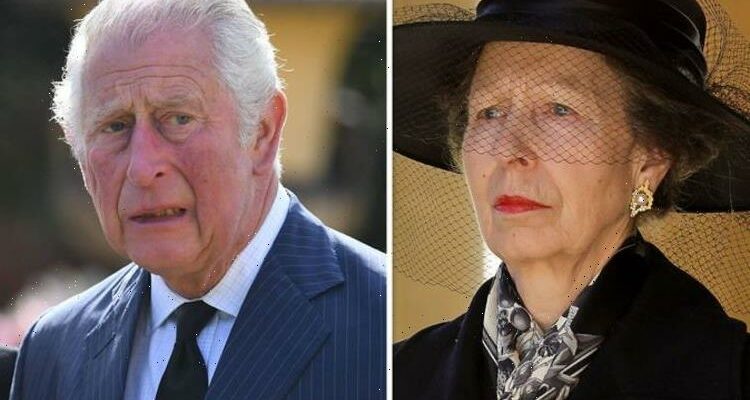 Princess Anne, 71, is respected for her unflinching dedication to royal duty and is thought to be one of the Firm’s safest pairs of hands. The Princess Royal shares Prince Philip’s “no-nonsense” approach to things and could be a huge source of support to her older brother Prince Charles, 72, when he becomes king.

While Anne is Charles’s younger sister she comes across as more “strong-minded” and “stoic” than the future king, a body language expert has claimed.

Reacting to a recent Prince Charles post of a sweet throwback picture of him looking protective of Princess Anne when she was a baby, body language expert and author Judi James claimed the tables have since turned and it’s now Charles who looks to Princess Anne for support.

The Princess Royal could take on a new important role within the Firm when Prince Charles becomes king, the expert claimed.

Judi told Express.co.uk: “With Philip gone and Charles clearly getting more mindful of his future role as king, there are signs that he could increasingly be seeing his sister as his rock in the royal Firm.”

Philip’s death has created a vacuum in the Royal Family that is likely to be filled by Anne going forward, Judi explained.

She added: “Charles seems to be decision-sharing with William recently but that relationship is rumoured to have been patchy in the past and Anne’s utter understanding of the traditional royal roles and their mother’s opinions, plus her apparent decisiveness and ability to speak her mind and ‘get’ Charles in a way that children or partners don’t always manage could make her invaluable to him.”

Charles will inherit the throne upon Queen Elizabeth II’s death at which point Anne’s support will be more valuable than ever before.

He is understood to want to cut the number of working royals there are when he becomes king which could see Anne promoted to a more important post.

Judi added: “It was said after Philip’s death that he was the person in the family who they could always turn to for advice and, being much like her father in many respects, Anne might just increasingly take that role in Charles’s, especially once he has pared down the Firm as rumoured, making what could be some unpopular decisions as he does.

“Anne’s body language always signals strength when she is beside Charles.”

Anne is 16th in line to the throne having been leap-frogged in the line of succession by her two younger brothers Prince Edward, 57, and Prince Andrew, 61.

Eugenie warning: Royal may have to ‘live in exile’ after Harry’s book [INSIGHT]
Prince Andrew could hide from lawyers at Balmoral ‘for months’ [VIDEO]
Princess Anne’s Olympic insult caught on microphone [PICTURES]

While Edward and his wife Sophie, Countess of Wessex, 56, are full-time working royals and are likely to continue as such when Charles is king, Andrew withdrew from public life in 2019 and is now thought unlikely to ever return to royal duty.

Princess Anne was gifted the special title of Princess Royal by the Queen shortly before her 37th birthday as recognition for her outstanding service to the crown.

The title will belong to her for life only passing on following her death at which point it is likely to pass on to her great-niece Princess Charlotte, six.

Anne carries out hundreds of engagements every year and has consistently been found to be the Firm’s hardest-working member.

She lives in Gloucestershire on the Gatcombe Park Estate the Queen gave her as a wedding present in 1973.

While Anne has dedicated her entire adult life to royal service she did not want the same for her children Peter Phillips, 43, and Zara Tindall, 40.

She rejected the Queen’s offer of royal titles for her offspring choosing to raise them as private citizens instead.

Both Zara and Peter have forged careers for themselves outside of the Firm and Zara even followed in her mother’s footsteps to become a professional equestrian.

One of Zara’s proudest moments was being presented with a medal by her mother Anne after winning silver with Team GB’s equestrian team at the 2012 London Olympic Games.