Room for reconciliation. The seating chart at Queen Elizabeth II‘s funeral was not a snub at Prince Harry from King Charles III, royal historian Gareth Russell exclusively tells Us Weekly.

“That’s the etiquette. If you know what the etiquette is, it actually is a place of honor,” Russell explained on Tuesday, September 20, about Harry, 38, sitting behind his father, 73. “To be the one behind the king is actually a sign of favor. What they seem to have done with this etiquette though is not prioritize [Prince William] or Harry.” 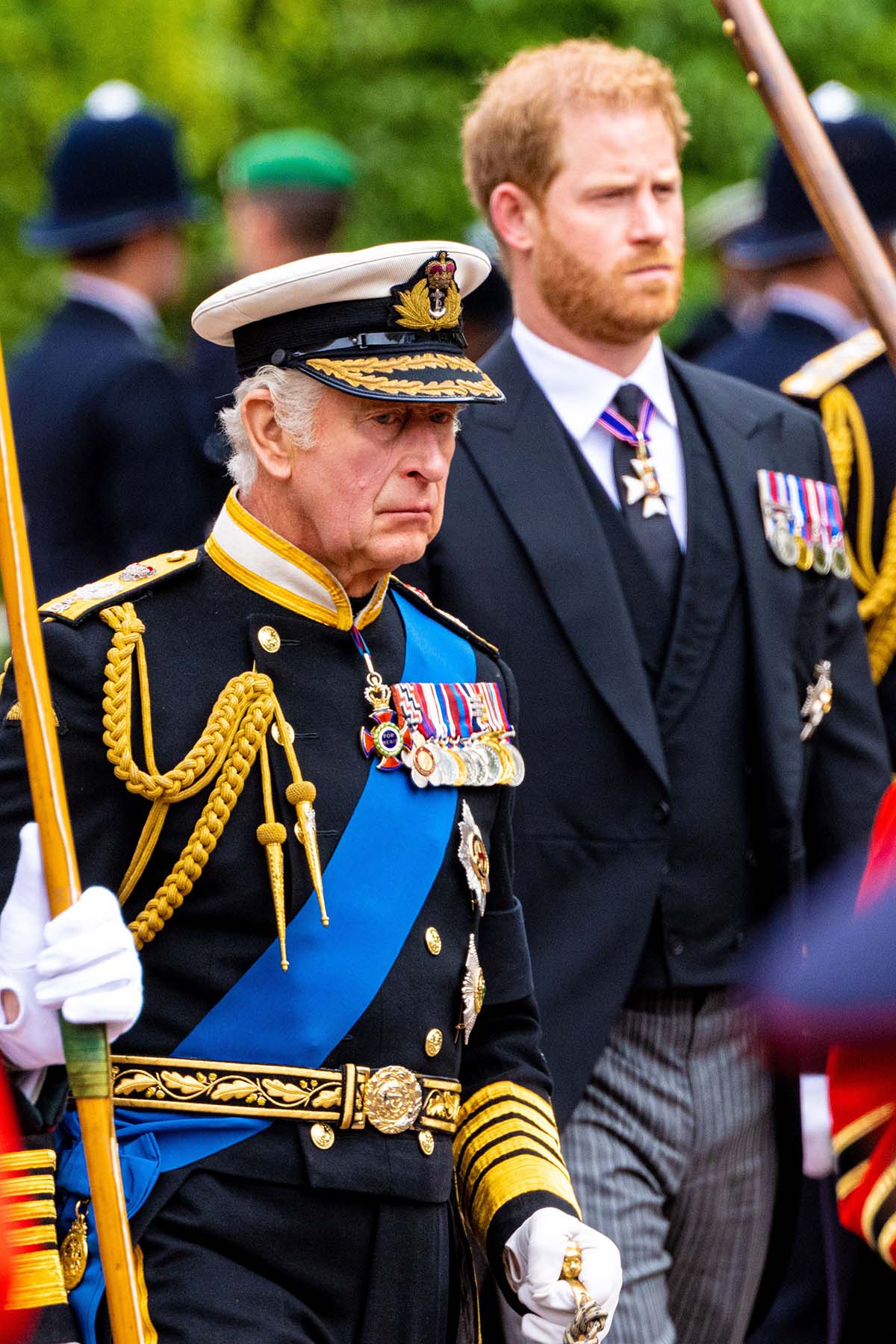 According to the royal expert, the decision was all about Charles paying respect to his sister, Princess Anne.

“The king’s major concern has been to give a place of honor to his sister and for the older roles to be relaxed,” Russell continued. “So we saw for the first time a female member of the royal family marching behind the coffin. What we were seeing really was a time for the queen’s children rather than necessarily a focus on the grandchildren.”

For the king, the priority was honoring his bond with Anne, 72. “Giving princess Anne her rightful place in the 21st century in monarchy [shows that] she really is her brother’s confidant. She is hugely admired in Britain for her charitable work, and we’ve seen that she is someone who’s dealing with great heartbreak at her mother’s passing,” he shared with Us. “But I don’t think there was necessarily a priority about William and Harry.”

Russell’s insight comes after the royal family came together to honor the late monarch on Monday, September 19. Following seven decades on the British throne, Elizabeth passed away at age 96 in Scotland.

Charles was joined by his siblings Anne, Prince Edward and Prince Andrew to pay their respects. Harry and his wife, Meghan Markle, also appeared at the memorial service with William, 40, and Princess Kate.

The Duke and Duchess of Sussex’s relationship with the royal family previously took a turn when they announced their decision to step back as senior members in January 2020. The couple, who share son Archie, 3, and daughter Lilibet, 15 months, made their exit permanent in February of the following year.

Harry later reflected on his tense relationship with his father, saying during a tell-all interview in March 2021, “I feel really let down because he’s been through something similar, he knows what pain feels like … Archie is his grandson. I will always love him. There’s a lot of hurt that’s happened. I will continue to make it one of my priorities to heal that relationship.”https://www.usmagazine.com/celebrity-news/pictures/inside-queen-elizabeths-relationship-with-daughter-princess-anne/

At the time, a source exclusively told Us that Charles didn’t react positively to his son’s comments. “Charles does not agree with Harry trashing his whole family in public,” the insider revealed. “Charles thinks these matters could have easily been addressed in private.”

Amid Harry and Meghan’s arrival in the U.K., Charles surprised the public when he wished for the pair to “continue to build their lives overseas” in California during his first address as king.

Charles’ bond with his youngest son made headlines again recently when Harry and Meghan were seemingly disinvited from a reception with world leaders on Sunday, September 18.

“A Palace spokesperson has reiterated this morning that Sunday’s state reception is ‘for working royals only.’ No further comment or guidance on why the Sussexes were invited (and now seemingly uninvited),” royal reporter Omid Scobie tweeted after Harry and Meghan were not in attendance at the event hosted by Charles.