Prince Harry and Meghan Markle welcomed their son Archie into the world in May 2019. Archie is now 3 years old, and he has been attending a nursery school. According to a recent report, Archie’s nursery teaches him and fellow children one underrated skill.

Prince Harry and Meghan Markle are living in California

Harry and Meghan stepped away from the royal family in early 2020. They subsequently moved to Montecito, California, which is almost two hours away from Meghan’s home city of Los Angeles.

The couple has been raising Archie and their infant daughter, Lilibet, in Montecito. In fact, Lilibet was one of the first royal babies born in the United States.

Harry and Meghan reportedly have a rift with some royals in the United Kingdom. However, the Sussexes are said to be “loving life as a family of four” and have “struck a rhythm as a foursome,” according to makeup artist Daniel Martin (via People).

Archie reportedly goes to a nursery that teaches ‘emotional literacy’

Archie is 3 and has been attending school. According to a new article from The Mirror, Harry and Meghan chose to not have Archie attend the All Saints by the Sea Episcopal School, which celebrities in the area often send their kids to. Instead, the Sussexes opted for a nursery further away but offers a special curriculum.

“The school teaches things such as ‘emotional literacy’, mindfulness and how to be kind and look after the environment,” the outlet wrote, although the name of the school was not revealed.

The Daily Mail also said, “The school also teaches Spanish, music, dance, theatre and coding as well as the less traditional mindfulness and how to be kind … It has gardens with hummingbirds, fruit trees, plants, butterflies, bees and students as young as two help grow and harvest vegetables.”

Additionally, the Sussexes seem to blend in well with other families at the school. A fellow parent reportedly shared, “Harry often drops Archie off and picks him up, and seems like a good dad. All the parents have been laidback in welcoming Harry and Meghan, without making a fuss. And to the other kids, Archie is just one of them. They don’t know his parents are royalty, and probably wouldn’t care – unless Meghan was a Disney princess.”

What is schooling like for Prince William and Kate Middleton’s kids? 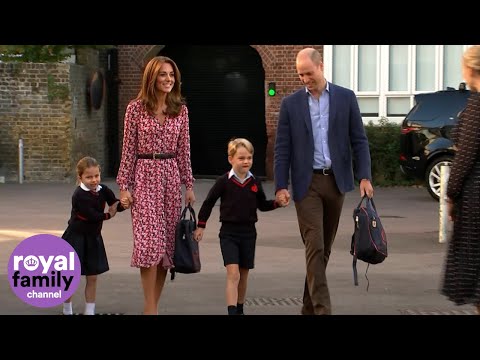 The two of them go to Thomas’s Battersea, a prep school that costs $24,000 a year per student. It has a good reputation among members of the upper class. The school even boasts alumni such as Cara Delevingne and Florence Welch.

Thomas’s Battersea’s website shares a list of activities its students can partake in, such as community gardening, pottery, computing, woodwork, and karate.