The first time that Pretty Awkward hit you up to see if you wanted to “HANG OUT,” it was a joyous pop-powered blend of indie and rock, an explosion of happiness wrapped in the euphoria of being young. But, what happens when you decide – screw it, we’ll do it live! Or — what happens when you choose to unplug and strip the song down to its core? What you get are two versions that offer a clever spin on an infectious slice of pop wonder. The band – Austin Held, Nicholas Wiggins, Jake Jones, and Damien Ward – transform their song with the “Live at Earwig Studios” and “Stripped Down” versions, both premiering here on HollywoodLife.

“‘HANG OUT’ is easily one of the most fun songs to play,” Austin tells HollywoodLife. “We’re always stoked to see how audiences react to this song in a live setting. After having not been able to play shows or tour much this last year and a half due to the pandemic, it feels like the song has taken on a whole new identity. With three of us living in the PNW and one living in SoCal, it’s awesome when we can get into a room together and play ‘HANG OUT’ for just ourselves. Naturally, we jumped at the idea of getting into a beautiful [Earwig] studio in Seattle to film a live performance of the tune, and we love how it turned out!”

For the “stripped” version, the group hit up Earwig Studios’ Red Room and let the spirit of the (still living) David Lynch take over. “Traditionally, when a band has a stripped version of a song, it mostly means an acoustic or sort of Kumbaya version of whatever song they’re playing,” says Austin. “We wanted to take it up a notch and do our best to represent our songs as closely as we could to their true form.” 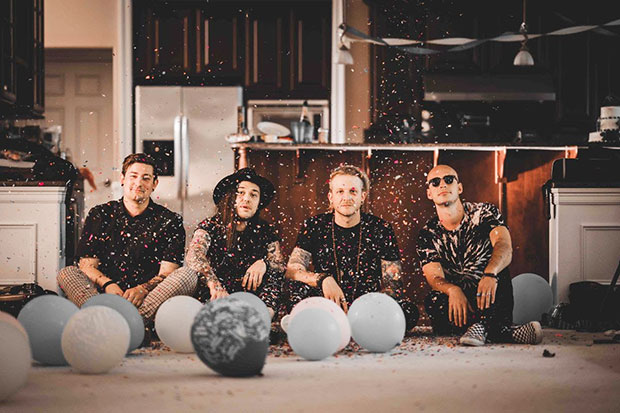 “In this alternate medium, we feel it takes on a different vibe,” says Held. “We were able to get into an amazing recording studio in Seattle called, Earwig Studios and upon visiting for the first time, we were enamored with a room that they have that has a very cool ‘Twin Peaks’ vibe to it and decided it would be the perfect spot to film a couple of songs with a 360 camera. We always love finding new ways to be creative with our songs and especially finding ways to it in new environments.”

Fans are going to get more Pretty Awkward in the coming year. After building a buzz with a handful of singles – “Higher,” “Misfits,” “Dangerous Love,” and “Bored” — the  Seattle-based quartet plans to release their debut LP in early 2022. And when the band comes to your town, don’t be awkward. Click “YES” on the invite and go hang out with them.