Thousands of Victorian homeowners having solar power installed are being told by the state’s distributors they will not be able to feed electricity into the network, as a rising tide of sustainable power hits the energy grid.

The block on new solar power feeding into Victoria’s grid comes despite a decade of warnings by regulators to the state’s power distributors they need to spend money on upgrading their networks. 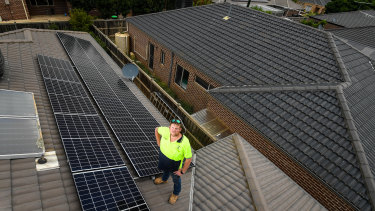 Matt Pilsbury switched on his new $8200 solar system. But he, like thousands of others across Melbourne, are being told by energy distributors they will not get a cent for any excess power provided to the energy network.Credit:Justin McManus

“Solar export limits” have been put in place by four of Victoria’s five distribution companies due to concerns the rapidly growing supply of power being pumped into Victoria’s network from home rooftop units will begin to disrupt the state’s power grid, which they control.

The block on export means people who install new solar systems won’t get paid for any excess energy (currently solar owners are paid 10 cents per kilowatt-hour generated; this falls to 6 cents an hour in July).

One in five homes in parts of Melbourne now have solar – particularly in the city’s fast-growing west where homes are bigger and larger rooftops are suited to energy capture, and families are larger and more conscious of saving on power bills. It compares to one in 20 in inner Melbourne.

Solar uptake has expanded because of rising power prices, falling installation costs, government subsidies and growing environmental awareness. “It’s gotten out of the realm of nerds and greenies and become mainstream,” said Dean Lombard from sustainable energy not-for-profit Renew. “A lot of people don’t understand the details of how the energy system works, but they know the big picture and that is that we have to get off coal.“

EnergyAustralia’s decision this week to accelerate the closure of its Yallourn power plant, which supplies about 20 per cent of Victoria’s energy, has raised the prospect of other power stations in the Latrobe Valley closing early, as coal-fired power struggles to compete with renewables.

Desperate not to disrupt a profitable business model that relies on taking a percentage of the cost of supplying electricity, the distributors – warned from 2012 of the growing uptake of solar power – are now spending millions of dollars to upgrade parts of their networks.

The move is coming too late for many consumers, among them Matt Pilsbury. He and his wife, who have three children, last week switched on 26 panels installed at their Tarneit home.

“I’m not allowed to pump back into the grid at the moment because they don’t have availability,” said Mr Pilsbury, who after rebates spent $8200 installing the system.

He anticipated a small payment for each kilowatt he supplied to the energy system each hour. “It would’ve taken about eight to 10 years to pay itself off” using that pricing, he said. It will take at least double that now unless Powercor relents and allows him to export energy.

Mr Pilsbury said an app on his phone showed his new system was already saving his family about $8 a week. “Being green was part of getting it. I’m a plumber so I install a lot of green hot water systems.” He estimated two-thirds of his street had put on solar power. “Everybody wants to save as much money as they can, and a lot of people have big families.”

Mr Pilsbury said Powercor “want to keep the money in their pockets rather than ours”.

More than 2000 new customers joining Powercor’s areas, which include all of western Melbourne and most of the state west of the city, were told in the past 18 months that if they installed solar they would get no payments for energy they provided to the network. Slightly fewer who are on AusNet’s grid in Melbourne’s east all the way to the border were told the same. Less than 1 per cent of CitiPower’s inner-city solar customers cannot feed back into the grid.

Powercor’s network solutions manager Claire Cass said of 32,580 customers connected to solar with Powercor in the last 18 months, only 2023 could not export power. “Some of these customers may have received approval to export since, due to network improvements made since their connection.”

Distributors are concerned about solar energy affecting the quality of power injected into the system. “This potentially impacts other customers, including those without solar,” Powercor said in a statement.

Ms Cass said the distributor had to maintain the network so that allowing solar power onto the grid would not “cause ‘brownouts’ or difficulties in starting up sensitive appliances like pool pumps and air conditioners”.

Powercor is spending $3 million between March and June in locations from Portland through to Point Cook making sure poles and wires can take differing voltage levels sometimes supplied by solar.

An AusNet spokeswoman said 154,000 of its 740,000 electricity customers were now on solar, and less than 1 per cent could not feed power back into the grid. She said while solar exporting onto the power grid was creating intense pressure on its infrastructure, the company was spending millions of dollars so more customers could install solar without constraints.

The rise of rooftop solar has in part been fuelled by the government’s Solar Homes Program, which has driven more than 100,000 homes to add a system. “We are on track for one million households to have solar panels by 2030,” Energy Minister Lily D’Ambrosio said.

Dean Lombard from Renew said limiting solar being fed into the grid was becoming more common because of the surge in installations.

“It’s really unfortunate,” for two reasons, he said: new solar users’ sums now didn’t add up, and they weren’t exporting to the grid to help the environment.“That excess clean energy gets wasted.”

He said the problem was being managed in a “blunt way” by distributors. He said an approach known as “dynamic export limits” was needed, which meant power networks could allow power to be exported most of the time but at certain times of day they could “dial it down – but these systems aren’t in place”.

Smart Energy Council chief executive John Grimes said the electricity distribution companies were operating in “an old fashioned paradigm of energy flows happening in one direction”. Electricity grids were designed for one-way power flows from centralised sources of generation; to accommodate rooftop solar, they must be modernised to allow two-way flows.

Mr Grimes said a lack of investment in the past decade meant distributors didn’t have visibility over which parts of the network could support the mass uptake of solar. “They’ve known for a very long time this has been coming,” he said. In 2012, the Australian Energy Market Operator forecast by the 2030s the majority of suitable roofs could have solar panels.

He also said distribution companies were too secretive, meaning a homeowner wanting to put on solar power “gets the quotes, accepts the quotes and then goes to get the system connected and then the distributor tells them ‘Sorry, you can’t feed power into the system’.”