Cabinet ministers could be dumped in a drastic move by Prime Minister Scott Morrison to lift the government out of a political crisis over the treatment of women while he prepares imminent policies to counter sexual assault.

Mr Morrison is considering a significant reshuffle to move Attorney-General Christian Porter out of the job over a conflict of interest while he sues the ABC over its reporting of accusations of rape, which he strongly denies. 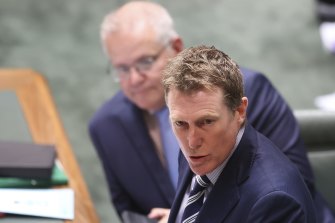 The reshuffle could also shift Defence Minister Linda Reynolds to a new job after she took leave over a long-running heart condition, clearing the way for other women to be elevated to positions of influence.

The changes are on the agenda as part of a wider plan to announce a series of measures to counter workplace sexual assault and harassment, violence against women and discrimination.

Mr Morrison told Parliament on Wednesday he was considering advice on Mr Porter’s role, in a remark that Liberal MPs saw as a sign he could drop or move the Attorney-General after weeks of damaging coverage of the rape allegation.

While Mr Morrison sought to reset debate in an emotional pledge on Tuesday to act on concerns about the treatment of women, his Liberal and Nationals colleagues are increasingly anxious his response has failed so far.

“It is a tsunami coming over the government and over the party,” said one Liberal MP of the backlash from women.

“So he has to make drastic change now. How else do you send a message that you’ve learned?”

Ministers and others within the government believe the community anger is powerful enough to destroy the government, losing voters in Liberal seats as well as making it impossible to win Labor seats.

The Coalition lost one seat and Labor gained another in a draft redistribution released last Friday, dragging the government down at the next election.

Mr Morrison has taken personal ownership of the policy response on sexual assault in the workplace after Labor slammed the government for taking a year so far to respond to the [email protected] report from Sex Discrimination Commissioner Kate Jenkins.

The [email protected] measures will toughen action against discrimination and are expected to be among the first policies announced after Parliament rises on Thursday.

The Morrison government is asking ministerial advisers to step forward with more information about a network of male staff who videoed themselves performing sex acts in at work in Parliament House.

The government is also planning a response to assault and harassment in Parliament House by changing human resources rules for staff, acting on a report from Stephanie Foster, a deputy secretary in the Department of the Prime Minister and Cabinet.

The actions on Ms Foster’s report are being planned in a way that complements a larger review of the Parliament House workplace by Ms Jenkins.

Mr Morrison told Parliament on Wednesday he was looking at the ministerial guidelines in relation to Mr Porter’s position, signalling a decision on whether he would remain Attorney-General and Minister for Industrial Relations.

In a remark that offered no praise for Mr Porter, the Prime Minister said he was yet to conclude his assessment of the legal advice, which came from Solicitor-General Stephen Donaghue.

“I am considering that advice with my department secretary, in terms of the application against the ministerial guidelines and when I have concluded that assessment, I’ll make a determination and I’ll make an announcement at that time,” Mr Morrison told Question Time.

Coalition MPs interpreted the comment as a sign the Prime Minister could leave Mr Porter to “hang out to dry” as the government grapples with a political backlash from some women over its response to weeks of debate about violence against women.

Mr Porter took leave after a press conference on March 3 when he identified himself as the cabinet minister mentioned in media reports about an alleged rape in 1988. He vehemently denies the historical allegation that he raped a 16-year-old girl while he was a teenager.

“Nothing in the allegations that have been printed ever happened,” he said.

He is due back from leave on March 30 and intends to resume his two portfolios and his position in cabinet, but some of his Coalition colleagues worry his return would further weaken the government as it tries to show women it is hearing their concerns.

Senator Reynolds has set a date to return to her job on April 2, which is Good Friday, but some of her colleagues expect her to resign.

While former SAS soldier and Western Australian Liberal Andrew Hastie was made Assistant Minister for Defence last December, he does not have full ministerial rank.

Another option would be to promote the Minister for Defence Industry, Melissa Price, but Mr Morrison demoted her from cabinet in his first reshuffle after the last election because of her poor performance as Environment Minister.

Mr Porter could keep the industrial relations portfolio and his cabinet rank while stepping down as Attorney-General, given concerns about any conflict of interest in his legal duties while he takes the ABC to court.