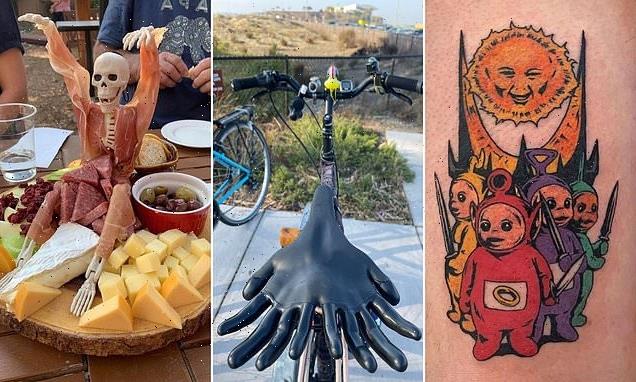 No accounting for taste! Snaps reveal bizarre creations that miss the mark – from a skeleton table centrepiece to a VERY questionable Teletubbies tattoo

We all like to think we have good taste but sometimes, what we like is at odds with others around us.

Whether it’s an ill-advised tattoo or an unusually designed statement piece of furniture, not everything we have is everyone else’s cup of tea.

A gallery collected on deMilked from the Awful Taste but Great Execution Reddit forum shows some such examples of truly bizarre pieces from around the world.

From household items to tattoos, they had plenty of thought put into their design, but ultimately turn a lot of heads for the wrong reasons.

Here, FEMAIL lists some of the strangest items people have bought or made that have ended up looking a little strange… 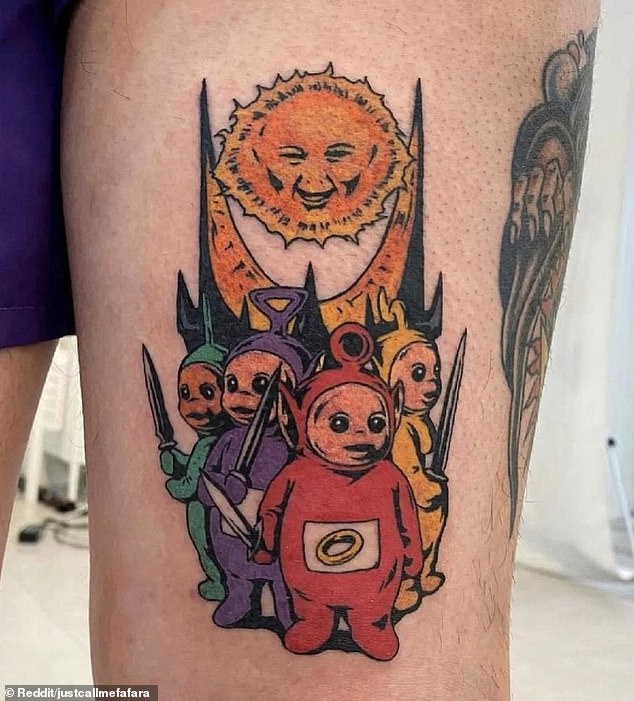 This well-drawn but unusual tattoo from a South Korean artist appears to be a crossover between beloved children’s TV series, The Teletubbies, and fantasy franchise The Lord of the Rings 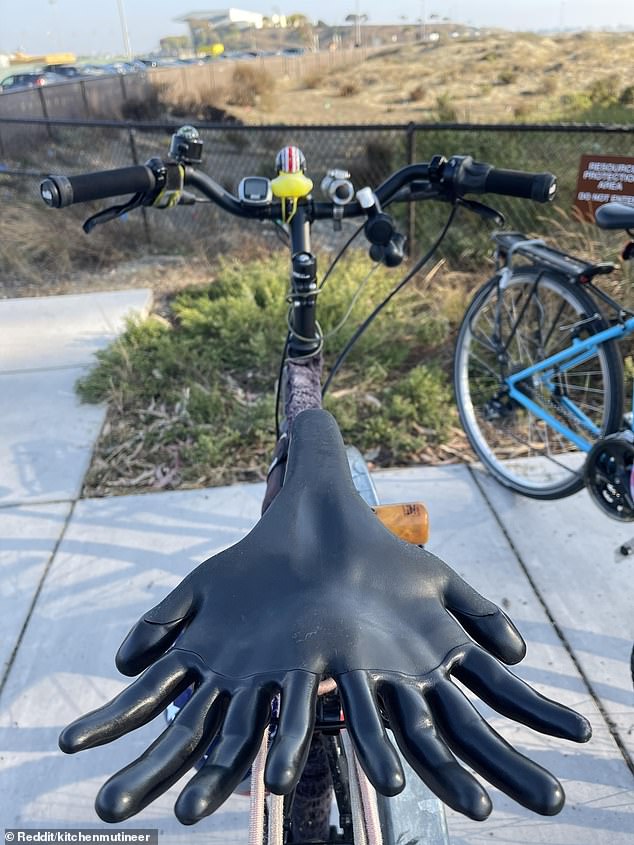 While this bicycle seat actually looks pretty comfortable, perching your bottom on it might feel a little bit strange – and perhaps somewhat violated 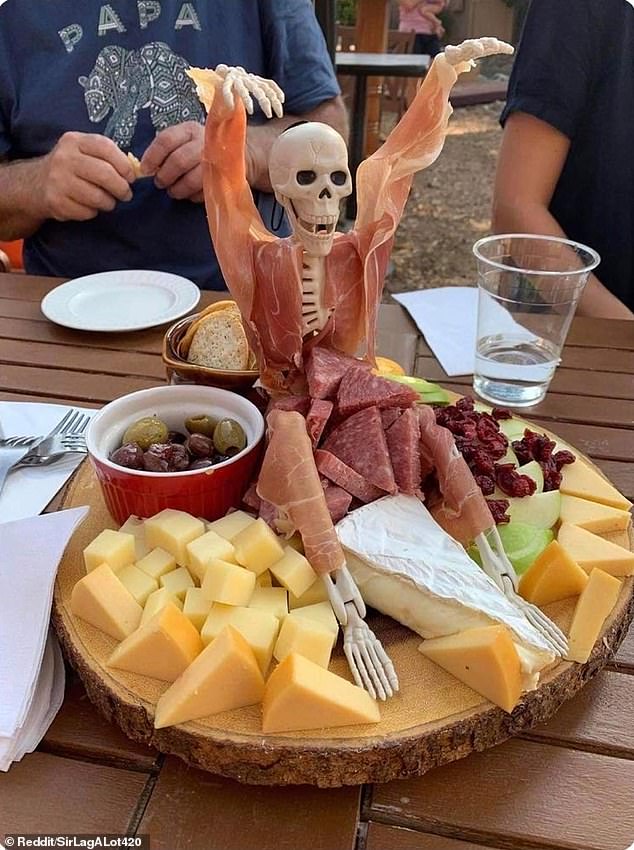 Some funny hosts decided to give their dinner guests the fright of their life when they presented a platter of cheese, olives, fruits and cured meat, which they draped around a mini skeleton to look like flesh. The photo was shared on Reddit by a US-based user 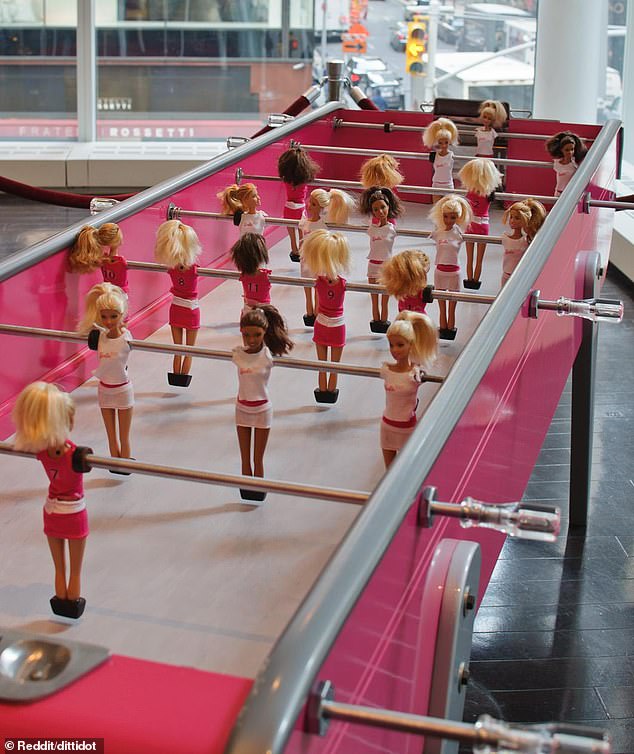 This foosball table in the US has been designed with a Barbie theme, with little Barbies as players and a bright pink colour scheme. It does the job, but it definitely makes you look twice 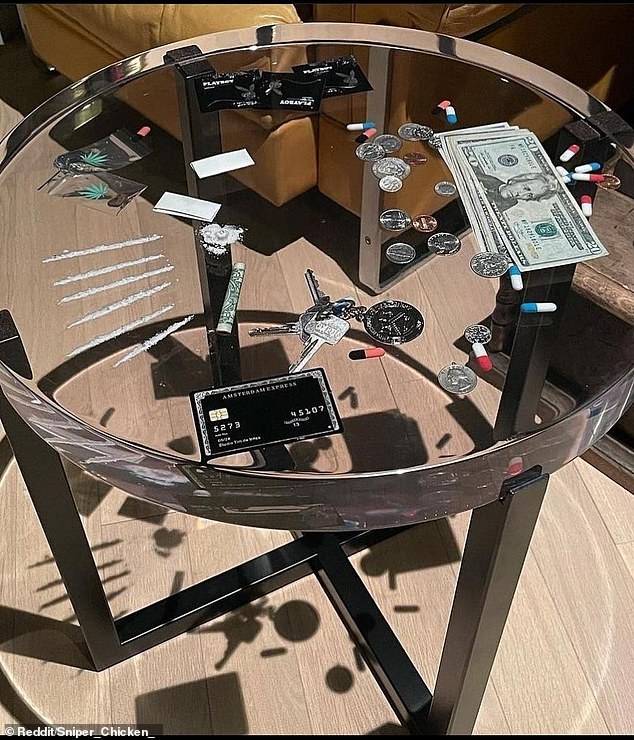 This bizarre coffee table designed in the US has been printed as if it is owned by a stereotypical ‘bad guy’  and while a good job has been done, it’s not exactly particularly tasteful 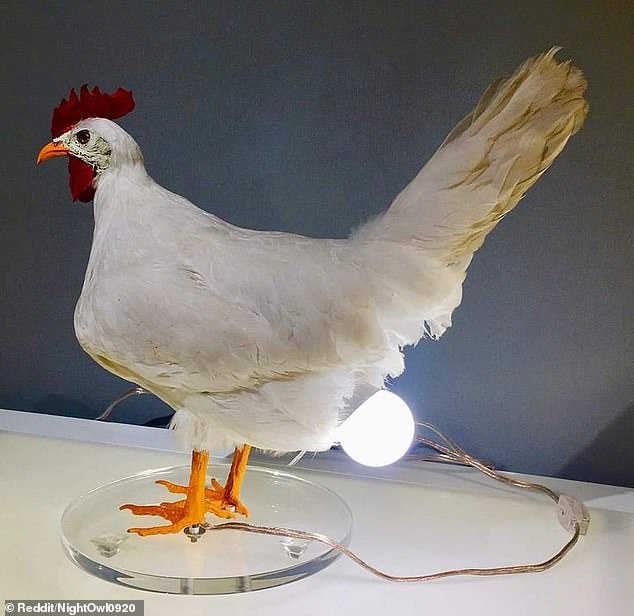 This lamp has been designed so the bulb resembles an egg being laid by a chicken which looks somewhat realistic – but might not be something people want on their desk. It’s available to buy on Amazon via an American brand 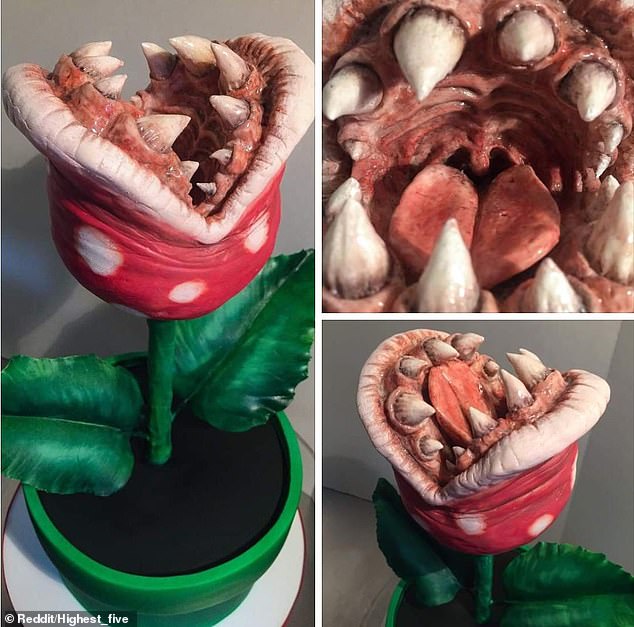 Is it a plant? Is it a monster? Wrong! It’s a cake, apparently – although you could be forgiven for losing your appetite when this is placed on the dinner table 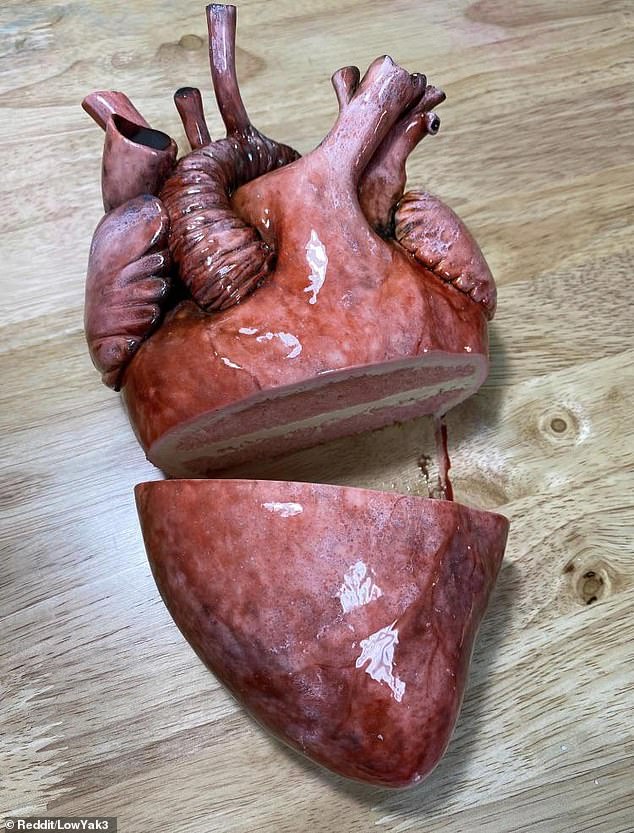 Looks can be deceiving – it’s another cake! While this cake by a Texas baker that is shaped and painted like a real human heart shows some impressive artistic skill, it falls short of making your mouth water 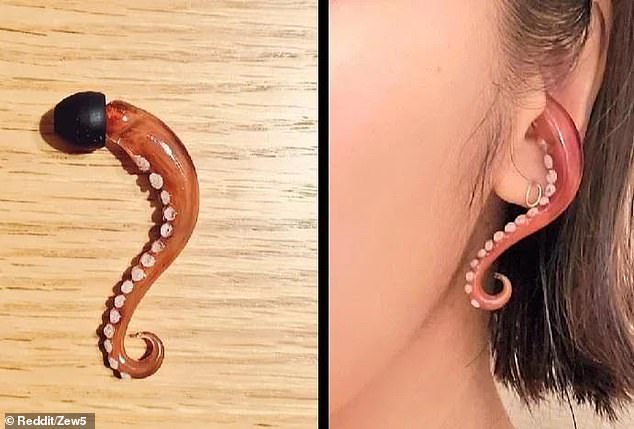 These unusual earphones from Japan have been modelled and painted to look exactly like tentacles – but when they’re coming out of your ear, people might end up giving you a wide berth 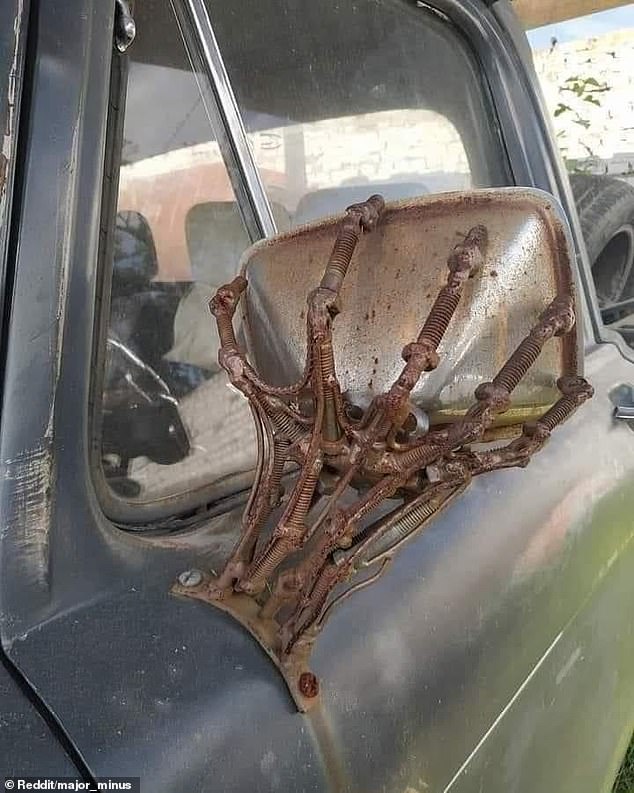 This unusual wing mirror holder has been designed with rusty screws and bolts in a way that resembles a zombie hand – which is great if you’re into horror movies, but a little off-putting if you’re not 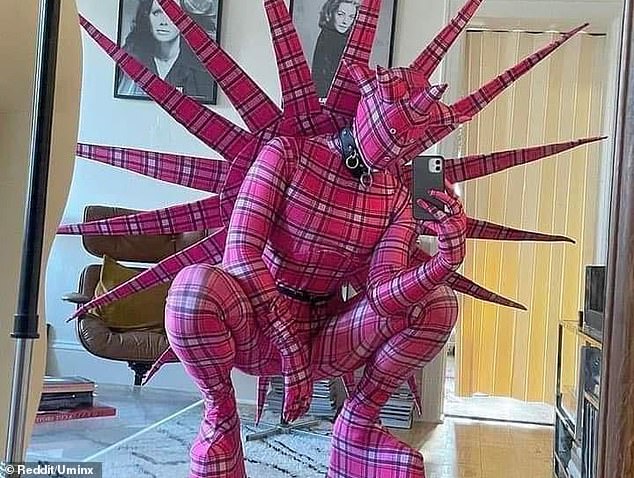 This custom-made outfit must have taken days to sew together and shows truly impressive textile work, but we’re not sure we would leave the house wearing it 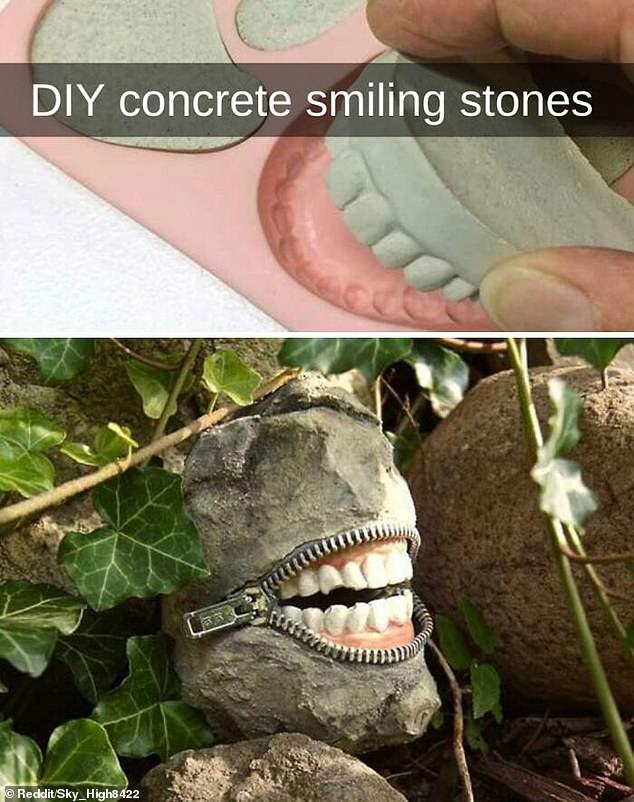 Garden gnomes are out! The new hot garden accessory from a DIY whizz in Canada is actually… concrete smiling stones, apparently 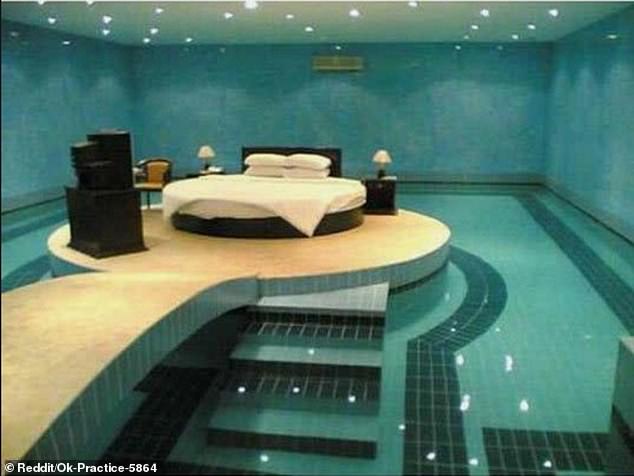 As serene as this bedroom situation may look at first, it’s probably not particularly ideal for a situation when you wake up in the night feeling groggy and are on the hunt for the toilet