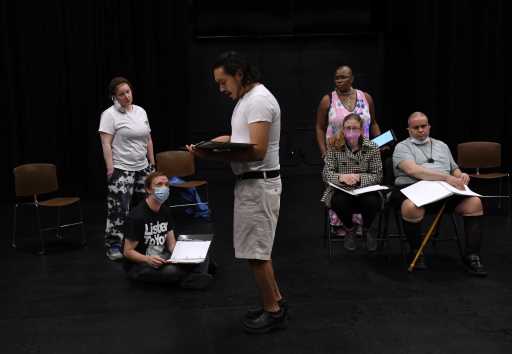 On a recent fall afternoon, cast members of Phamaly’s new production, “Vox Vergere,” were rehearsing one of the show’s eight one-acts in an all-purpose room in the Tramway Nonprofit Center where the theater company founded by theater artists with disabilities is located. The omnibus show opens Oct. 13 at The People’s Building in Aurora and runs through Oct. 23.

That afternoon, the cast members were working toward completing blocking for “The Party.” And director Betty Hart was giving some new guidance to the players who’d gathered around a supper table in an increasingly raucous scene. Without giving too much away, the play, written by a.a. brenner, teases notions of role-playing, marriage and the wonders of country-western star Gretchen Wilson. It’s getting nutty, but when actor Ratt Walsh, who plays Baby Lizzie ever so fleetly, at Hart’s suggestion, strikes a pose as her hero Wilson, the ensuing hilarity promises these actors have come to play — and to perform.

This desire to hone craft won’t come as a surprise to long-time fans of Phamaly, now in its 33rd season. For the company’s artists it’s never been simply “let’s put on a show” as much as “let’s put on a really good show.” Yet, even those who attend the company’s annual musical and play offerings may never have attended the troupe’s more intimate Vox Phamalia presentations, which began as a collaboration with local actor Edith Weiss. Most of the early shows were written by Phamaly actors and reflected their joys and concerns, outrages and challenges. More recent iterations included an online series devoted to the movies (CineVox) and 2021’s “CoronaVox: Stories from the Front,” based on interviews gathered during the pandemic. It, too, premiered virtually.

“For this year, we wanted something that would speak directly towards writers who are intersectional in their identities and would focus on a specific theme,” said Phamaly artistic director Ben Raanan, who took the reins of the company in 2021. “When we typically think of intersectionality, a lot of our art is focused on trauma and pain,” Raanan added. “In early conversations with our team, we wanted this show to focus on celebrating all of our various identities.”

What better way to achieve that aim than land on love? thought director Hart, So, she gave the playwrights a prompt that referenced singer Dionne Warwick’s famous observation, courtesy Hal David and Burt Bacharach: “What the world needs now is love, sweet love.”

“I literally thought, ‘What are we going to need more of this fall?’ ” Hart said. She added a few more cues to get her playwrights’ juices flowing, among them: love can be transformational; love is a superpower; love can open or close us depending upon how it’s transmitted; the loss of love or joy can create anti-heroes, super villains, or endless time in therapy. For “Vox Vergere,” Phamaly reached out to local writers and also some out-of-towners.

“I love that the playwrights were excited by the prompts — beyond what I could have ever asked for,” Hart said. And the works could not be more different.

“I think the most important thing that was reinforced for me is just how abstract art can be,” said Raanan of the variety of stories. “There is something magical about the playwrights receiving the same prompt but not being in communication with each other at all throughout the writing process. It has led to an evening with a solid through line, but one where each play is vastly different from the next.”

“The Party” is a sitcom-style lark with some sibling shenanigans. Siblings also figure into Sxr OM Dxtchxss-Davis’s “Fed,” about sustaining love and dangerous loyalty. Kalyn Heffernan, MC for the band Wheelchair Sports Camp, penned a spiky, wonderfully carnal declaration of desire and rage with her solo piece, “Convenient Store Love Story,” to be performed by Apollo Blue, who, like the Heffernan, relies on a wheelchair.

Twanna LaTrice Hill’s “Love Multiplied” imagines a touching and amusing first date complicated by the bickering “alters” the character Middle School Teacher lives with and has made – for the most part — peace with. Should she or shouldn’t she reveal to her date her crowded reality?

Concise and vulnerable “DM,” by Ryan Jay Haddad, focuses on the text back and forth of a potential hookup, performed by Laurice Quinn. Simone Brazzini’s “Glory be to…” is a deft bit of dystopian business that turns the idea of a gender reveal party on its pretty little head.

Richly textured, Marcelina Ramirez’s “Querida mi amor” is a yearning choreopoem of loss. And, as if to reply to the call of the Denver Center’s current production of “Much Ado About Nothing,” Sheila Ivy Traister’s troupe of Shakespearean players pulls the curtain back on their own feelings and aggravations. In doing so, in “Much Ado About Something,” might they rediscover a profound joy?

As for the able and nimble ensemble embodying these works in ways that address the too-bifurcated notions of ability and disability, Hart, who is directing her first Phamaly show, said: “Sometimes theater can be really painful. This process has been really joyous. There is a joy and a love and an appreciation of play.”

“It doesn’t mean we’re not working,” Hart added. “But often people forget that a play at heart should be playful, that it should be a playing, it should be — what’s the word I want to use? ‘discovery.’ ”

Raanan believes that discovery should be multifaceted. In attending Phamaly productions, audiences of shared and varied abilities can’t help but be changed or at least challenged. It’s why he was drawn to lead the company in the first place.

“I want a company that celebrates disability in an honest and thoughtful way. I want us to continue asking more complicated questions of our disabled and nondisabled community,” he said in an email. “Vox is special because I believe that we, as disabled folks, are the most innovative and complicated people in the world. A show like Vox helps us infiltrate societal ideas that we have typically been shut out of.”

Subscribe to our weekly newsletter, In The Know, to get entertainment news sent straight to your inbox.