Gregory Day is not a book collector; he's a book reader. But he does collect first editions of one writer, Patrick White, the first Australian winner of the Nobel Prize for literature. The only one he's missing is Happy Valley, White's 1939 debut.

So it seems appropriate that Day is this year's winner of the eponymous prize that White established with his Nobel winnings to encourage writers and that has traditionally been awarded to a writer who "has made an ongoing contribution to Australian literature, but may not have received adequate recognition". It was first presented in 1974, to Christina Stead. 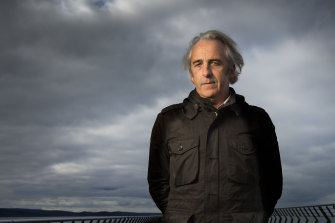 Day receives $15,000 and said it was a complete surprise: "There's no shortlist." White had been a profound influence on him when he was younger. "He opened up the inner life."

He was particularly pleased that the prize is given for a body of work. He has written five novels, the most recent of which, A Sand Archive, was shortlisted for the Miles Franklin award, but also poetry and music. He is also a frequent reviewer for The Age and The Sydney Morning Herald.

The problem with awards for single works, he said, was that there were always zeitgeists, fashions and trends that changed every year.

"My whole approach to my writing for the whole time has been about building a whole interrelated bunch of work. I've had in my head a kind of Balzac idea, a whole suite of things that add up to some kind of portrait. Each of the books have to stand their own but they're very interdependent, particularly around place of course."

He recalled when he was 23 going to hear White deliver a speech at LaTrobe University critiquing Australia during the Bicentennial year of 1988. White then had only a couple of years of life left.

"He was like some Old Testament prophet. When he was sitting on the stage you couldn't believe he would be able to stand up let alone speak. He was really old. He got up and made it to the lectern and his voice just went boom. He was railing against advertising and ad-men and he quoted this Robert Gray poem which is about a Japanese Zen type of thing.

"He was talking about how it's the ordinary everyday simple things of life that matter most. He went on this refrain that I've been thinking of because of the COVID thing. He just started bellowing out ‘Stay Home', ‘Boil the Bath Water', ‘Stay Out of the Cafes', ‘Stay Home'."

Day said what White said had been ringing in his ears all year. "It's an amazing thing that it stuck in my head."