Five big donors increased their influence in federal politics last year by making 46 per cent of all donations in a period that saw a fall in overall funding to $18 million.

Mining magnate Clive Palmer led the list of big spenders with $5.9 million in donations to his United Australia Party in the year to June 30, adding to at least $83.5 million the previous year to fight the last election. 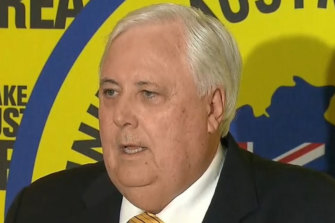 Clive Palmer led the list of big spenders with $5.9 million in donations to his United Australia Party in the year to June 30.Credit:ninevms

He was followed by packaging billionaire Anthony Pratt, whose company gave $1.3 million to the Liberal Party and $250,000 to the Nationals, as well as $20,000 to Labor.

Gas company Woodside Energy donated $110,000 each to Liberal and Labor as well as $55,000 to the Nationals and smaller amounts to all three parties, possibly for attendance at events.

Macquarie Group donated $251,230, spread across the major parties, and the Australian Hotels Association gave $232,301, according to the tally by the centre.

The Australian Electoral Commission released the annual disclosures on Monday morning for the 2019-20 financial year, showing a fall in total funding after the last election.

Tobacco company Philip Morris gave $55,000 to the Nationals. Other parties refused donations from the company.

James Packer’s Crown Resorts gave $25,000 to Labor and $25,000 to the Nationals among dozens of small donations, with a heavy emphasis on payments in Western Australia, where it runs a casino in Burswood.

The big donations included $150,000 to the Greens from Duncan Turpie, a professional gambler who regularly supports the party.

Trevor St Baker, the owner of coal-fired power stations as well as an investor in renewable energy, donated $25,000 to the Liberals and $35,750 to Labor during the year.

Hancock Prospecting, the company owned by iron ore billionaire Gina Rinehart, appeared to scale down its political funding. It donated $37,000 to the Liberals.

University of Melbourne professor Joo-Cheong Tham, a member of the Centre for Public Integrity, said the annual figures highlighted the flaws in the system.

“The absence of caps on political donations has permitted a handful of donors to dominate the funding of political parties,” he said.

“That the most significant level of government has the weakest political finance laws is a grave weakness of Australian democracy.

“Caps on election campaign spending are necessary for a level playing field in elections.”

Greens senator Larissa Waters will move on Monday to halt federal grants and tenders to political donors through a private member’s bill that is unlikely to gain major party support.

The Greens want to cap donations at $1000 a year, lower the disclosure threshold and stop donations from mining, banking and other industries.