A Palestinian activist whom Israeli forces recently arrested and then freed said Monday that the international community must cut through propaganda and identify the continued expulsion of Palestinian families in East Jerusalem’s Sheikh Jarrah neighborhood for what it really is.

Mohammed el-Kurd, who since childhood has protested the Israeli occupation with his twin sister, Muna el-Kurd, spoke to Peacock TV’s Mehdi Hasan about, among other things, the 23-year-old siblings involuntarily becoming the global face of Palestinian resistance and thus being targeted by Israeli forces.

Both Mohammed and Muna el-Kurd were temporarily detained by Israeli military forces on Sunday for leading protests against settlers trying to forcefully expel dozens of Palestinian families from their homes in the Sheikh Jarrah and Silwan neighborhoods of occupied East Jerusalem. Though the el-Kurds have spent most of their lives nonviolently documenting their struggles as Palestinians in Sheikh Jarrah, both brother and sister went viral separately in the past month for their activism.

“There’s hundreds and hundreds of Palestinians that are working tirelessly on the ground ― journalists especially, and medics and activists that are doing just as much,” el-Kurd told Hasan. “We’re very grateful for the reach, and we hope that our voices can amplify the Palestinian cause and the fight for Palestinian liberation, but I also want to highlight the hundreds of Palestinians that have been arrested over the past week, the tens that were arrested just after my release. This is not an anomaly. It doesn’t begin or end with my sister and myself.”

El-Kurd said that the arrests are a “clear tactic of intimidation” that follows what he said is the Israeli forces’ “campaign of mass incarceration under the name of law and order” to suppress any resistance to the “colonial violence via home expulsions or home demolitions or bombing of innocent civilians.”

The expulsions are what helped ignite the deadly 11-day attack on Gaza last month. But despite Israel agreeing to a cease-fire with Gaza militant group Hamas, the Israeli government has continued its campaign to displace Palestinian families in East Jerusalem. The campaign is part of a system of Israeli laws working to increase the number of Jews and decrease the number of Palestinians in Israel and the occupied territories ― a system that several human rights groups say meets the definition of apartheid. 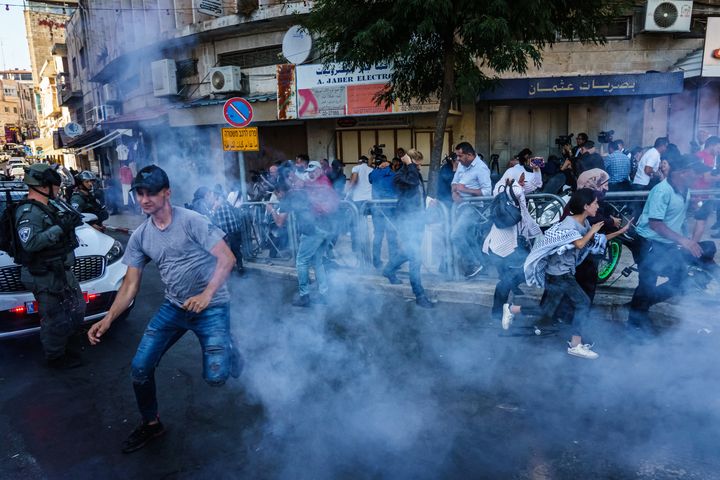 Israeli settlers have been carrying out the decades-long effort to remove families from densely populated Palestinian neighborhoods in the so-called Holy Basin just outside the walls of the Old City. Two Jewish religious associations purchased the land now known as Sheikh Jarrah in the late 19th century but never built on it.

During the war of 1948 that followed Israel’s creation, Jordan took ownership of the West Bank and East Jerusalem, including Sheikh Jarrah. Because the war resulted in what’s known as the Nakba ― when about 700,000 Palestinians either fled or were expelled from their homes as a result of Israel’s statehood ― Jordan used the land now known as Sheikh Jarrah to settle Palestinian refugees and built homes there for 28 Palestinian families in 1956.

During the 1967 war, Israel captured and annexed East Jerusalem in a move that violated international law. The Israeli Knesset, or parliament, passed a law just three years later that allowed Jews who fled or were expelled from East Jerusalem in 1948 to reclaim their land ― a right denied to Palestinians who fled or were expelled from Israel during the same war. This means Israeli Jews can register as Sheikh Jarrah landowners, but Palestinian refugees who live there cannot do the same for their pre-1948 property, leading to forced evictions.

In February, the Jerusalem District Court ruled that residents of four houses in Sheikh Jarrah ― amounting to six families and 27 people ― could be forcibly evicted. The families appealed in the case that’s now made its way to the Israeli Supreme Court, which has been delaying a ruling but scheduled a hearing for July 20. Israel’s attorney general announced Monday that he would not intervene in the case, which human rights and civil rights groups say does not paint a positive outcome for other Palestinian families who have been threatened with expulsion.

U.S. Secretary of State Anthony Blinken had said that Palestinians in Sheikh Jarrah should settle the matter of their forced displacement in the Israeli courts. But such an idea is “inconceivable,” according to Mohammed el-Kurd.

“It’s inconceivable for us to seek justice from our abusers,” he said. “I think the international community must hold Israel accountable and end its impunity.”

The el-Kurd family lost half of its property to settlers in 2009 after the two Jewish associations sold Sheikh Jarrah to a settler group owned by U.S.-based Nahalat Shimon International. Palestinian Sheikh Jarrah residents have reported experiencing violence and intimidation from new settlers. Now the el-Kurds face removal from the other half of their property.

“It’s been very clear the Israeli propaganda machine, be it the attorney general or people bankrolled by the Israeli government, have been trying really hard to frame this as a ‘property dispute,’ as a ‘real estate dispute,’ to depoliticize the active state-sanctioned ethnic cleansing that is happening for us in Sheikh Jarrah, for people in Silwan, for people in Isawiya, for people in Jaffa, for people in Lifta,” el-Kurd said on “The Mehdi Hasan Show.”

“But it’s not apolitical. What’s happening is very political, because if it weren’t political, you wouldn’t have Israeli occupation forces assaulting and arresting journalists, removing medics from the scene. You wouldn’t have them detain Palestinian activists like my sister and myself. You also wouldn’t have prominent Israeli right-wing politicians set up their offices in Sheikh Jarrah. So this is clearly a legalized way of ethnic cleansing. It’s also happening in Silwan, where people are not dispossessed by U.S.-registered settler organizations, they’re dispossessed by the Israeli occupation municipality itself. Just because you can legalize an evil act doesn’t make it any less evil.”