Overlooked is a series of obituaries about remarkable people whose deaths, beginning in 1851, went unreported in The Times.

It was hardly the first affront. They had grown up in a segregated Alaska: separate schools, hospitals, theaters, restaurants and cemeteries. But for Elizabeth Peratrovich and her husband, Roy, Tlingit natives, the sign they spotted in Alaska’s capital one day in late 1941 was the final straw.

“No Natives Allowed” read the notice on a hotel door.

“The proprietor of Douglas Inn does not seem to realize that our Native boys are just as willing as the white boys to lay down their lives to protect the freedom that he enjoys,” they wrote in a letter to Ernest Gruening, the territory’s governor, signaling the start of their campaign to fight discrimination in Alaska.

Calling such open bias “an outrage,” the young activists continued, “We will still be here to guard our beloved country while hordes of uninterested whites will be fleeing South.”

Gruening agreed with the Peratroviches, and they joined forces. In 1943, they attempted to usher an anti-discrimination bill through Alaska’s two-branch Territorial Legislature. It failed, with a tie vote of 8-8 in the House.

In the two years that followed, the Peratroviches doubled their efforts, urging Native Alaskans to campaign for seats in the legislature and taking their cause to the roads to gain support. They even left their children in the care of an orphanage for a summer so they could travel across the state more freely.

By the time the new bill reached the Senate floor, on Feb. 5, 1945, Congress had increased the size of the territory’s legislature, two Natives had been elected to it, and Alaska’s House had already approved the bill. Though the odds of passage were high, the bill set off hours of passionate debate and drew so many onlookers that the crowd spilled out of the gallery doors.

Senator Allen Shattuck argued that the measure would “aggravate rather than allay” racial tensions.

“Who are these people, barely out of savagery, who want to associate with us whites with 5,000 years of recorded civilization behind us?” he was quoted as saying in Gruening’s 1973 autobiography, “Many Battles.”

When the floor opened to public comments, Peratrovich set down her knitting needles and rose slowly from her seat in the back.

Taking the podium, she said: “I would not have expected that I, who am barely out of savagery, would have to remind the gentlemen with 5,000 years of recorded civilization behind them of our Bill of Rights.”

She gave examples of the injustices she and her family had faced because of their background, urging that “you as legislators can assert to the world that you recognize the evil of the present situation and speak your intent to help us overcome discrimination.”

Her testimony, The Daily Alaska Empire newspaper wrote, shamed the opposition into a “defensive whisper.”

The gallery broke out in a “wild burst of applause,” Gruening wrote. The 1945 Anti-Discrimination Act was passed 11-5. 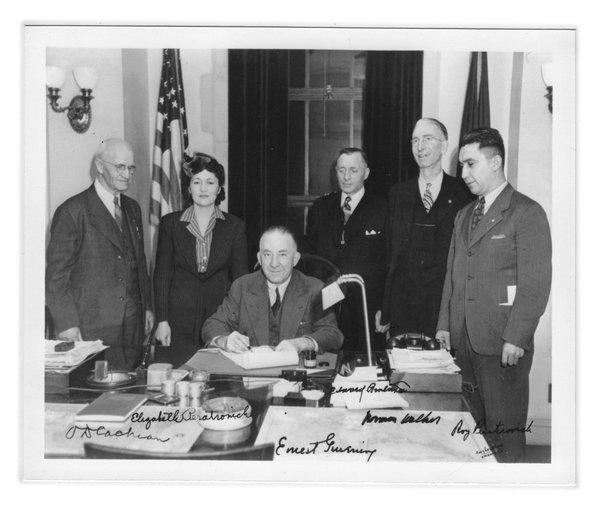 Gruening signed the bill into law on Feb. 16 — a date that is now celebrated by residents of the state each year. It entitled all Alaskans to “full and equal enjoyment” of public establishments, and set a misdemeanor penalty for violators. It also banned discriminatory signage based on race.

It was the first anti-discrimination act in the United States. It would be nearly 20 years before the federal Civil Rights Act would be passed, in 1964, and 14 years before Alaska would become a state.

In 2020, the United States Mint will commemorate Peratrovich on a $1 coin. A gallery of the Alaska House of Representatives has been named in her honor, and a bronze bust sculpted by son Roy Jr. adorns the lobby of the State Capitol.

And yet aside from her famous speech, “most people know very little about her,” said Annie Boochever, whose biography, “Fighter in Velvet Gloves,” written with Peratrovich’s son, was published earlier this year.

“My mother was determined to stand her ground but she would always do it with grace and dignity,” Roy Jr. wrote in the book’s introduction.

She was born on July 4, 1911, in Petersburg, Alaska, the daughter of a Native woman and her Irish brother-in-law. The two left her in the care of the Salvation Army and she was adopted by Andrew Wanamaker, a Presbyterian minister, and his wife, Jean, a basket weaver. Wanamaker was a charter member of the Alaska Native Brotherhood, a nonprofit organization formed to address racism.

Young Elizabeth grew up speaking Tlingit and English and living a subsistence lifestyle with her parents in Sitka, in southeast Alaska. When she was 10, the family moved more than 100 miles away to tiny Klawock, a Native village on Prince of Wales Island, where she met her future husband, the son of a Yugoslavian fisherman and a Tlingit woman. Though they first attended separate boarding schools, they both graduated from the public high school in Ketchikan, which had been integrated after a Tlingit leader successfully sued the school board.

They married in 1931 and returned to Klawock, where Roy worked as a policeman, a chief clerk and a postmaster. He then served as the village’s mayor for four terms. He was also a member and grand president of the Alaska Native Brotherhood.

Elizabeth raised their children: Roy Jr., Frank Allen and Loretta Marie. She loved to dance, and watch wrestling; she knew all of Gorgeous George’s moves and often yelled at the screen as she watched.

“Dad just looked at me and said, ‘That’s your mother,’ ” Roy Jr. said in an interview. “We laughed.”

In 1941, the Peratroviches moved hundreds of miles north to bustling Juneau to play a larger role in state politics. By the time Elizabeth was elected grand president of the Alaska Native Sisterhood, a counterpart to the Brotherhood, in 1944, Roy was leading the Brotherhood.

Together, they would lay a civil rights framework for future generations, said Paulette Moreno, the Sisterhood’s current grand president.

She likened their efforts to “house posts,” the often beautifully carved structures upon which a traditional Tlingit house would stand. Yet, she said, “The shelter is not solid or complete because we witness discrimination and harassment in our communities today. But Elizabeth and Roy have given us role models.”

In 1954, Roy accepted a position with the federal Bureau of Indian Affairs and moved the family to Oklahoma. But when Elizabeth learned in 1956 that she had breast cancer, they returned to Juneau. Once her illness worsened, she entered a Christian Science care center in Seattle, where Roy Jr. was attending college.

She was buried in the shade of a Sitka spruce in Juneau’s Evergreen Cemetery, beside a plot reserved for her husband, who would die in 1989.

Every year, a groundskeeper opens the bollards that block street access to the grave for one day, on Feb. 16 — Elizabeth Peratrovich Day.