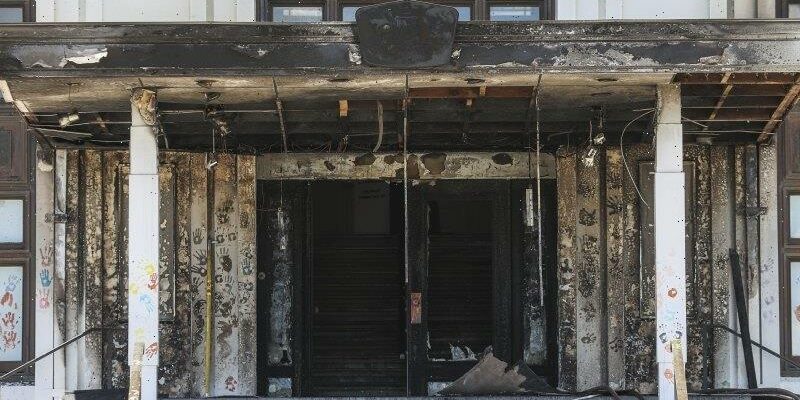 Old Parliament House in Canberra will be closed to the public for weeks while parts of the heritage building are cleaned of soot and the entrance repaired after protesters set fire to its 100-year-old front doors, which may not be salvageable.

Federal and ACT police have formed a special taskforce to identify protesters who were responsible for the fire on Thursday, using footage from officers’ body-cams, social media or submitted by the public. 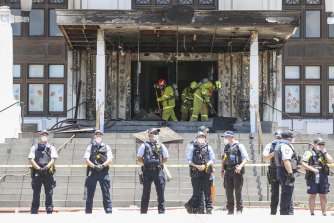 Firefighters and police at the damaged entrance to Old Parliament House on Thursday.Credit:Alex Ellinghausen

Protesters returned to occupy the steps of the building, now home to the Museum of Australian Democracy, on Friday morning but the scene was relatively peaceful compared with the blaze that damaged the entry a day earlier.

Australian Federal Police said in a statement they are contemplating charges of damaging Commonwealth property, arson and incitement, and have already interviewed witnesses.

Several suspects have been identified and will be interviewed in coming days. Anyone with footage of Thursday’s events is asked to contact Crimestoppers and quote the reference number 6993036.

“The AFP and ACT Policing respect the right to peacefully protest, and negotiations with elders within the protest group continue,” the statement said.

Museum director Daryl Karp and some staff were allowed back into the building on Friday afternoon for an initial assessment of the damage after police decided it was no longer a crime scene.

Ms Karp said the doors, which date from 1927, “are really, really badly damaged” and conservators will not know whether they can be salvaged until they take them down and assess them.

King’s Hall, inside the front entrance, and the chambers are covered in soot but were not damaged by water.

“It really is the damage from the very thick, acrid smoke we are currently assessing,” Ms Karp said.

“The chambers have got soot all over them, the Speaker’s chair will probably have similar amounts. So there’s a lot of cleaning and conserving that we need to do over the next few weeks, possibly longer.”

Protesters have been occupying the heritage building’s steps and forecourt over the past fortnight. They include well-known influencers from the “freedom movement” who oppose vaccine mandates and lockdowns, as well as people claiming to be sovereign citizens who believe federal and state governments are invalid.

On Thursday, the situation escalated and a fire was lit at the base of the doors. Some protesters initially said the fire was sparked by an Indigenous smoking ceremony that got out of control.

However footage of the protest which emerged overnight shows the fire at the doors was well alight before police arrived. The video, circulated widely on social media, also shows one person putting a pile of sticks onto the blaze as protesters stand around with their backs to the fire, blocking the view of people down the steps.

Special Minister of State Ben Morton, who has responsibility for Old Parliament House, said his department had advised him permission had been given to the protesters, on police advice, to hold smoking ceremonies in the carpark but “no approval whatsoever given for a fire of any sort to be at the doors of Old Parliament House or under the portico that burnt”.

“I’ve been to smoking ceremonies before and I haven’t seen them leading to buildings burning down. What I’ve seen on the footage that has been widely available, was a deliberate act of violence at the doors of Old Parliament Health House, which have led to significant damage,” he said.

“I can’t work out why there would be agreement given to the lighting of fire by protesters on the grounds of Old Parliament House, but these are questions that will need to be answered.”

On Friday, no fire was evident as police kept protesters on the other side of the car park from the building.

A group of about 30 people stood in a face-off with a line of police for an hour. At 11.30am, they chanted, “Always was, always will be Aboriginal land” several times before the bulk of the group dispersed.

One protester used a megaphone to tell those reluctant to leave, “Come on you mob, we’ve got an agreement, we’re only allowed there from 10.30 to 11.30 … You mob are breaking the agreement“.

Although many appeared to be staying near the Aboriginal Tent Embassy, the embassy’s council said on Thursday it did not condone the destruction of property and that the “smoking ceremony” was done without the knowledge or consent of the council and traditional owners.

Ngambri Ngunnawal elder Matilda House-Williams, who helped establish the tent embassy in 1972, also released a statement saying she was hurt to see the actions of the protesters at Old Parliament House.

“As custodians of the ACT and surrounding region, my family are always open for respectful dialogue, to support and take care of the many men, women and their families that find themselves here on our beautiful lands,” she said.

”I am disappointed these protesters chose to disregard cultural protocols and not communicate with myself or other elders of my family.

“These behaviours today do not represent the Aboriginal community here and it doesn’t reflect the vision and families that have held the space at the Aboriginal Tent Embassy for almost 50 years.”