The usher at David O'Doherty's show at The Forum says the Irish comedian plays the same venue every year at the Melbourne International Comedy Festival at the same time.

That neatly sums up O'Doherty's relationship with Melbourne, a place he visits regularly and knows well.

He gets lots of local laughs with jokes about the height of Melbourne's semicircular bicycle stands and the fate of the Apple store at Federation Square. 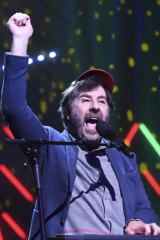 O'Doherty knows his crowd which are mainly of a similar age to him joking that the dress code for the gig is "the launch for Windows 95" and that he is more "Tudor than Millennial".

His schtick is to play his electronic keyboard and intersperses jokes with songs.

This isn't a musical performance – O'Doherty mainly talks over the music rather than singing – but it's very funny and ties the show together neatly.

There are moments when my sides actually ache from laughing so much and I'm not alone in the sold-out crowd.