As hospitals prepare for a wave of new infections to peak next month, western Sydney nurses will stage a simultaneous protest on Monday morning to highlight staffing levels they say are harming patient care.

Nurses at Westmead and Blacktown hospitals will gather in their own time as their night shifts ends to call for urgent attention to the hospital-wide impacts of understaffing. They will issue a plea to Premier Dominic Perrottet to visit the hospitals to see firsthand the scale of the problem. 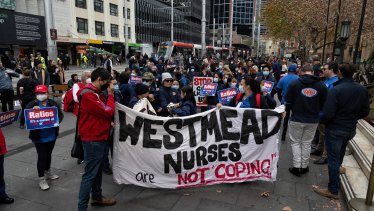 Nurses at Westmead and Blacktown hospitals will stage a simultaneous walkout at the end of their shifts on Monday.Credit:Nick Moir

High among their concerns is suspected COVID patients mixing with non-COVID patients over long periods waiting in overwhelmed emergency departments.

A NSW Health spokesman said there were 2719 health workers in isolation across the state as of Friday. During the last peak of the outbreak in January more than 6000 staff were forced to isolate on a single day.

NSW Nurses and Midwives Association organiser Mark Murphy said members at Westmead and Blacktown hospitals had escalated staffing concerns with the local health district, which was now “beyond a crisis”.

“It’s the combination of chronic understaffing, overcrowded waiting rooms and a lack of access to additional beds. We appeal to the government to revisit the implementation of nurse-to-patient ratios into the legislation.”

A Western Sydney Local Health District spokeswoman recognised the dedication of all staff in keeping the community safe, adding that the nurses’ action would not affect the public.

After visiting Blacktown, Westmead and Kogarah hospitals over the weekend, NSW Labor leader Chris Minns yesterday argued that workers were suffering the symptoms of underinvestment in the health sector.

“The frontline health workers have been talking about this for the last two years, they’re now at breaking point. The government’s come to the party with a modest sum, but it’s too late to make a difference this flu season”. 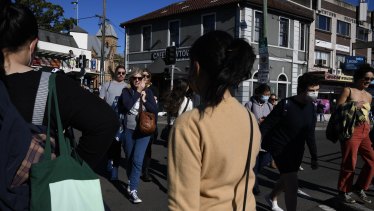 Health authorities have recommended people return to mask-wearing where social distancing is not possible.Credit:Dean Sewell

A NSW government spokeswoman said the Coalition had invested $33.5 billion in the latest health budget.

“Recurrent funding is $30.7 billion, representing a 98.3 per cent increase on Labor’s last budget of just over $15 billion,” she said.

As part of a $4.5 billion boost to the struggling health sector the government promised to recruit more than 10,000 nurses, doctors and other staff to hospitals and health services.

Hayes said his greatest concern was losing the confidence of the community in health advice through inconsistent messaging, pointing to the Albanese government’s forced backdown on maintaining the original end date for COVID isolation payments.

The $750 pandemic leave payments for workers without access to sick leave will now be available until the end of September after sustained pressure from state leaders, doctors and unions.

Doctors have continued to raise their concerns over the decision to end rebates for dozens of telehealth services, as the Albanese government on Saturday agreed to create a new, temporary Medicare item to cover longer GP telehealth consultations to prescribe COVID-19 antivirals.

The decision came after the Australian Medical Association and Royal Australian College of General Practitioners pressed their case with federal Health Minister Mark Butler on Friday, but both organisations said the change did not go far enough.

AMA president Dr Omar Khorshid said older Australians and people without the means to make video calls for appointments could not afford to lose access to the other telehealth services.

Rebates for about 70 different telehealth-related consultations were cut on June 30, including for specialist items and GP consultations longer than 20 minutes, after the government elected not to extend them.

“It’s actually shut the door to some vulnerable patients accessing health care and that includes aged people, but it also includes rural people. So it makes a nonsense out of equality of healthcare access”.

A spokesman for Butler said six out of seven telehealth consults were under 20 minutes, and therefore covered by Medicare.