On Anzac Day you could usually find Allan Lorraine eating lunch with his family at his local RSL. But the WWII veteran, who worked in signals for Australia’s Sixth Battalion in New Guinea from 1942, won’t be there on Sunday.

Born in then working-class South Melbourne in 1923, he was one of the 655 Victorians in aged care who died from coronavirus last year. 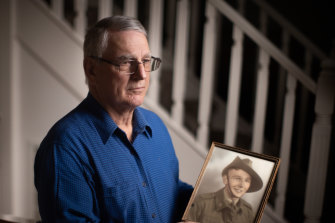 Mr Lorraine had just turned 97 when he died, 10 days after testing positive to the virus.

“His health before then was OK but not great,” said his son Bob. “He had an amazing resilience.”

Bob – along with his family – will continue his father’s tradition this Anzac Day and have lunch at Cheltenham RSL. There, they will remember a veteran whose life after the war saw him become an accountant. It was a skill that proved invaluable in the other fight of his life, six decades after the war ended. 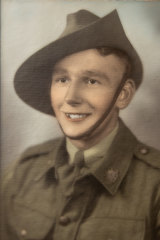 Ombudsman Deborah Glass became part of that struggle – to get the residents of the Mentone Gardens retirement home compensation. The home went into liquidation in 2013 after its 40 residents were swindled out of millions of dollars.

About half a dozen of the residents in the home were returned servicemen and women, and Mr Lorraine fought for years to get the Victorian government to compensate these families – whose centre was overseen by the state Health Department.

“In my many years in the complaints business, he was my favourite complainant,” Ms Glass said in January, when she spoke at a memorial service for Mr Lorraine held six months after he died. The strict limit at the height of the pandemic in Victoria meant only 10 people could go to his funeral.

Mr Lorraine would be awarded an Order of Australia for his work for the residents of Mentone Gardens.

Ms Glass said Mr Lorraine’s actions had been an important factor in her decision to launch an investigation, the findings of which were scorching. They led the state government, which had ignored its responsibilities for years, to compensate residents a total of $4.3 million.

Ombudsman offices exist because of the imbalance of power between the individual and the state, and Ms Glass said Mr Lorraine was “an embodiment” of that mismatch: “[A] 92-year-old battler, who has lost his family’s life savings through the incompetence of the state, writing his letters to powerful people whose minions brushed him off, but refusing to give up”.

Bob Lorraine said that many years before his fight with the state, his dad had been forced to give up his final year at Melbourne High School – where he’d won a scholarship – because his family was too poor to keep him at the school.

War broke out before Mr Lorraine could finish his training at a part-time accounting college.

Bob said his father was in the Signal Corps in New Guinea.

“He carried around radios with dirty big battery packs; they provided the ground support,” Bob said. “He wasn’t getting shot at; he wasn’t looking down the bayonet of a Japanese soldier. But he ended up an acting sergeant and was training all of the signals people at Bonegilla.”

In the army from 1942 until 1946, Mr Lorraine then went to Melbourne University and got a Bachelor of Commerce. He would go on to marry his wife Rose, who was in the Women’s Royal Australian Navy , also from 1942 to 1946.

They would have four children – Bob, Margaret, Vera and Christina – and live in Aspendale and Moorabbin for 50 years. Spanning five decades, he worked his entire professional life for the Commonwealth public service including the role of investigations officer with the Australian Tax Office, and later as chief auditor with the Department of Labour and Industry.

While Mr Lorraine wasn’t involved much with the RSL, he was a member from the end of the war until the day he died.

He also didn’t march every year. “But he often attended the dawn service or local RSL service,” Bob said. 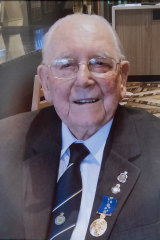 Mr Lorraine contracted COVID at BUPA Aged Care Edithvale last August. In all, 18 residents at the home died with coronavirus, and 85 residents, staff and their contacts acquired the virus.

Bob said while BUPA had handled the outbreak well, his real frustration was with the Andrews government for having let the virus into the community in the first place. “The state government really let us down,” he said.

Before his illness, Mr Lorraine’s family hadn’t been able to see him for 12 weeks, because of lockdown measures in aged care homes. They had only one or two Skype conversations with him. After he got sick, they were able to visit twice – though only from behind a window looking into his room.

“Dying with coronavirus was not a fitting end to his lifetime of service,” said Bob.