When Irish rock band U2 was 10 years into what’s become four decades together, 20-year-old Noel Gallagher was a guitar player working odd jobs, including construction work in his hometown of Manchester.

It was 1986; Bono and his U2 bandmates were in Dublin recording The Joshua Tree, which would be released in March the following year and top the album charts in more than 20 countries. It came with a far more ambitious scope then their previous album, The Unforgettable Fire, and Gallagher –  who was still a year away from joining Manchester’s Inspiral Carpets on tour as a roadie – was captivated by the enormous, cinematic style of Bono’s storytelling on songs such as Where the Streets Have No Name, I Still Haven’t Found What I’m Looking For and With Or Without You, the latter becoming U2’s most successful song when released as The Joshua Tree's first single. 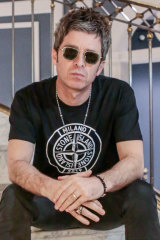 "It’s one of the great moments in rock," Gallagher said from his home in Manchester recently, ahead of joining U2 in Australia as part of The Joshua Tree tour this month. The former Oasis guitarist and songwriter, who’s fronted Gallagher’s High Flying Birds since 2011, will open U2’s ongoing, live celebration of The Joshua Tree, which was first staged in Canada and North America in 2017 to mark the album’s 30th anniversary.

"When the intro to Where the Streets Have No Name comes on, when you see this show, it’s going to f—in’ blow your mind," the 52-year-old says in his distinctive Mancunian accent. "The hairs on the back of your neck stand up, it’s an undeniable great moment in rock," he says, as if replaying moments from the album in his head.

Bowie has become more of an influence over the last three years … he was fearless.

Released almost eight years after he first heard The Joshua Tree, Live Forever was penned by Gallagher and was the third single from Oasis’ debut album Definitely Maybe. The song, sung by younger brother Liam Gallagher, was the first Oasis track to crack the British top 10 and catapulted the band into the rock ‘n’ roll stratosphere – a place where only the music world's genuine stars shine.

"I’ve always been a fan," Gallagher says of U2. "They’ve become like family to me now, I’ve known them for almost 30 years, I know all their kids and their wives, that’s why this tour is such a great thing for me to be able to do. I’m really lucky. U2 shows are always a 10 out of 10 experience, it’s just amazing, but what I’ve also been impressed by is the vibe. When you get a band of U2’s size, the people around the band are mostly Americans, but this is all Irish people, it’s the biggest movement of Irish people since the potato famine. Lovely, lovely people and it’s a real privilege to be on the tour, hanging out and all that … then on top of it you get paid at the end. It doesn’t get any better."

And this from a man who’s earned considerable wealth, not only touring with Oasis between 1991 and their famous split (following a stoush between himself and Liam after a gig in 2009), but from also being that band’s chief songwriter.

At their height, Oasis were on a different level to most of the bands making headlines in the ’90s. Despite – or more likely because of – the unending fascination (particularly in the British press) with anything about Noel, his quirky brother and the group they personified for close to two decades, the older Gallagher is happier talking about his beloved football team Manchester City, upcoming shows and where he finds inspiration.

He’s only just released the second of two EPs this year; the latter This Is the Place he describes as "what Oasis would sound like now with electronics and drum machines" if they were still making music.

"If I’m at home, it’s me on my own, and if it’s in the studio there’ll be at most two other guys, but they’ll be engineers, not musicians, and they won’t have an opinion, they don’t get an opinion." 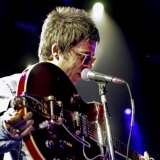 Noel Gallagher, on stage with his High Flying Birds in 2015, around the time of their second album, Chasing Yesterday.Credit:REUTERS

Some things, it seems, don’t change, even if he’s using more drum machines than drummers in the studio. All the way back to when Oasis first started, Gallagher has sought creative control of whatever he’s working on.

"For me, the work has often been an anchor in a sea of chaos, so if I don’t take the work for granted and I respect what I do, then I’ll be fine," he says. "It’s a lesson I taught myself … and I’m still here."

His shift away from drums and guitars, in favour of a sound more akin to his 1999 collaboration with the Chemical Brothers on their enormously popular Surrender album, was a long time coming, helped along by producer David Holmes, who worked on Gallagher's 2017’s Who Built the Moon album.

"David said to me at the outset, ‘Why are you always playing the f—in’ guitar?’ and I said, ‘'Cause that’s what I f—in’ play’. And then, he’s like, ‘Can you play a f—in’ synthesiser?’ It took me about a year to get out of the mindset of being the guy who picks up the guitar and is trying to come up with the riff, you know what I mean? Virtually everything I’ve done over the past four or five years, the guitars have gone on last. It’s a fun phase and it’s still me … the songs are up, but it’s a radically different sound."

Like U2, who were an early and lasting influence on young Noel, David Bowie has become a more significant figure for the older, more mature Gallagher in terms of the late musician’s unswerving dedication to his art.

"Bowie has become more of an influence over the last three years," he says. "Just thinking, ‘What would he do?’ He was fearless, he didn’t give a f—. I remember at the time Let’s Dance came out [in 1983], I loved Let’s Dance and the old David Bowie fans vilified him for it. If I’m in that place now, the Oasis fan base being split over what I do, that’s a good place to be because the artist will always come out on top."