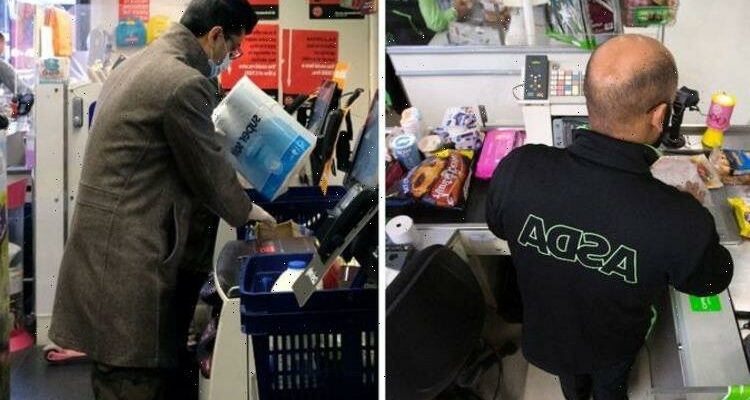 Plastic screens were put in place between staff and customers at checkout tills at the start of the pandemic. Since England’s so-called Freedom Day in July, some screens have been scrapped from supermarkets, but not all.

Supermarkets have spent hundreds of millions of pounds on Covid measures since the beginning of the pandemic.

Now, retail bosses have said they have begun preparations to scrap the screens as day-to-day activities, such as shopping, start returning to normal.

Major supermarkets and non-food retailers have held talks with contractor over how and when they might be removed, according to industry sources.

One senior executive said: “They don’t want the removal to be just another plastic crime that occurs, so we’ve started those discussions.”

In an attempt to be environmentally friendly, retail leaders may launch a scheme to recycle the screens in bulk and recover some of the costs of purchasing them at the start of the first national lockdown last year.

Although no deadline has been set, one removal company is putting together a plan “to get rid of them”, the Telegraph reported.

However, some retailers have already taken down their Perspex screens.

From July 19, sandwich chain Pret was the first company to remove the screens, saying it would “help speed up service and ensure we limit overcrowding”.

It also made face coverings voluntary, instead of mandatory, for both staff and customers.

But it kept the Perspex screens between members of stuff and customers at regular tills in place.

The supermarket also continued to urge customers to wear masks on entry to its stores.

However, not all shoppers were happy when Sainsbury’s removed the screens at self-service checkouts.

Some customers took to social media to criticise the retailer’s move. One person said: “Was it really necessary to remove screens at checkouts so soon? No longer feel safe in store.”

Another customer wrote: “I really do not understand your logic in removing screens at self-service checkouts but keeping them between staff and customers. Have you thought through the implications of the messaging this gives your customers?”

One customer tweeted: “I don’t get why @sainsburys have removed the plastic screening in their supermarkets? I’d really hoped not having someone stood on top of me at the self-checkout was going to be permanent.”

Another person added: “You’ve kept screens between checkout and customers but not for self-checkout which helps protect customers from each other. Why remove those screens? Please explain.”

Due to the number of complaints it had received in July 19, last month Sainsbury’s hinted at the idea it might bring back the screens.

In early August, a Sainsbury’s spokesperson said: “Safety remains our highest priority and we’re closely monitoring colleague and customer feedback on the updates we recently made to measures in stores in England.”

However, the situation remains unchanged.

As for the plastic screens between staff and customers at checkouts, it is not yet known when Sainsbury’s – and other supermarkets – will remove them.

Last week, a spokesperson for the British Retail Consortium said “the screens will stay for the time being, certainly until the case numbers of the pandemic come right down”.