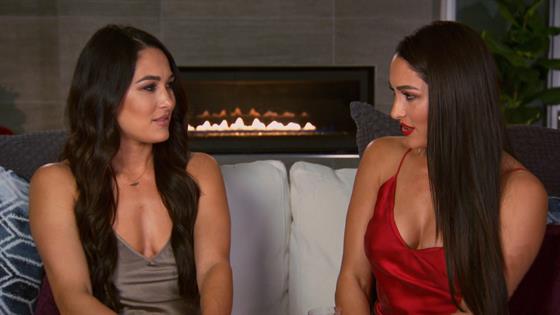 In this clip from Sunday’s all-new Total Bellas, Brie Bella takes the lead in attempting to set twin sister Nikki up. Apparently, the mother of one has taken on this task as John Cena‘s ex refuses to use dating apps.

“When you’re in the spotlight, sometimes it’s nice to kind of have people help you go on dates,” Brie explains in a confessional. “First off, she won’t go on Tinder or Bumble.”

Furthermore, per Birdie Danielson‘s mom, both she and Nikki “always feel like everyone’s a serial killer.” Regardless, Brie has made it her mission to set Nikki up with another famous face.

“Mom will love this one! Peter [Kraus] from The Bachelor—he was a fan favorite,” the WWE veteran notes to the family.

Surprisingly, both brother J.J. Garcia and sister-in-law Lauren Garcia are eager for this match. After Lauren reveals she “was rooting for Peter” on the dating show, J.J. confesses he likes “that guy.”

Still, Peter isn’t the only contender, as Taye Diggs appears to have also expressed an interest in Nikki.

Brie goes on to put her support behind Diggs as she thinks the Private Practice alum “would be fun.”

Ultimately, Kathy advises Nikki to go out with both men as “the power is in numbers.” This doesn’t sit well with the single Bella Twin as she doesn’t want to be turned into The Bachelorette.

Watch a brand new episode of Total Bellas Sunday at 9 p.m., only on E!