Nigella’s been mocked for making a meal out of the simplest dish. But she’s not the only top chef with a recipe for perfecting the basics

She’s mashed a tray of fish fingers, put banana skins in a curry and covered her bread dough in a leopard-print shower cap.

And viewers of Nigella Lawson’s new cookery show were left scratching their heads again this week when the TV chef spent a toe-curling 71 seconds instructing the nation how to butter a slice of toast.

But she’s far from the first celebrity chef to teach home cooks the most basic of culinary skills. From making tea to boiling eggs, here are the most blindingly obvious ones around. HANNAH FARMER gives her verdict and her advice on how to get them right. 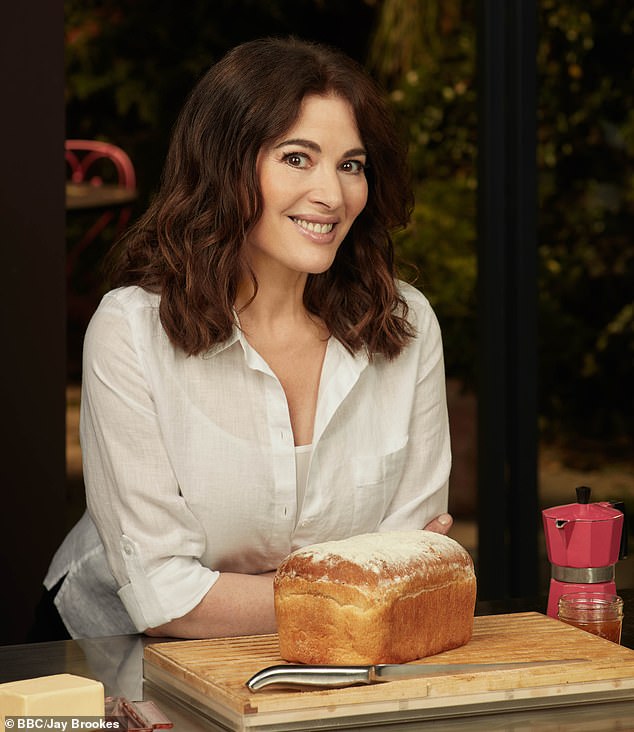 TEATIME WITH A MODERN TWIST

It might seem straightforward, but the everyday practice of making a cuppa has been elevated to a fine art.

Heston Blumenthal is so passionate about tea-brewing that he’s come up with a gadget — the £169.95 Sage Tea Maker — to get it just right.

He says the perfect cup is not about the tea but the temperature you brew it at (somewhere between 70c and 100c). Too hot and you burn the leaves, making it ‘bitter’ and ‘astringent’. 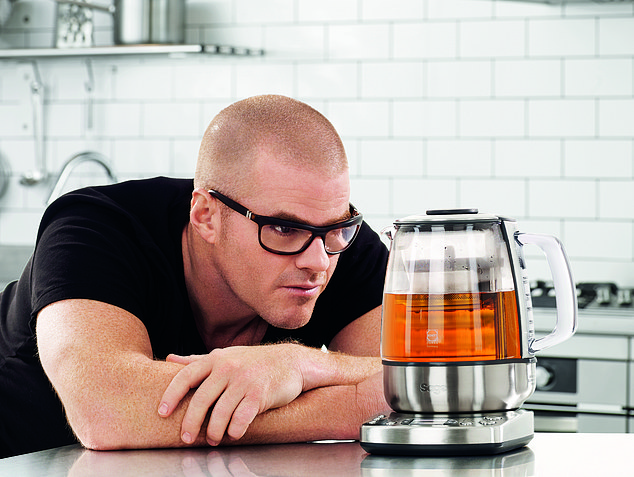 Heston Blumenthal (pictured) is so passionate about tea-brewing that he’s come up with a gadget — the £169.95 Sage Tea Maker — to get it just right

Mark Hix, meanwhile, former executive head chef of The Ivy London, insists on loose leaf English breakfast tea in a China pot, ‘which must be pre-warmed for three-and-a-half minutes’. It’s then served in a mug, tea first, with a splash of milk.

When it comes to bags, chefs rate a strong blend such as Yorkshire Tea, brewed for a few minutes so that when milk is added it is the colour of a Werther’s Original boiled sweet.

MY METHOD: Heston’s right; boiling water does add bitterness, so switch the kettle off around 20 seconds before it’s boiled.

Put a teabag in a mug — I rate M&S’s Luxury Gold blend — pour the water on top and let it brew for 90 seconds. Remove the bag and add a splash of milk.

Delia Smith educated the nation on boiling eggs in her landmark book, How To Cook, in 1999. Twenty-one years later, her method is still deemed fail-safe by both amateurs and professionals.

Bring a pan of cold water to the boil, gently lower in an egg (at room temperature; not chilled) and allow it to simmer for a minute. Take the pan off the heat, put the lid on and continue to cook the egg for six minutes if you like a runny yolk, seven if you like it firmer.

When it comes to scrambling and poaching, techniques differ wildly. Gordon Ramsay has a seven-step technique, taking the mixture on and off the heat repeatedly for three minutes to get the texture just right. He then adds seasoning and — controversially — a spoon of crème fraiche. 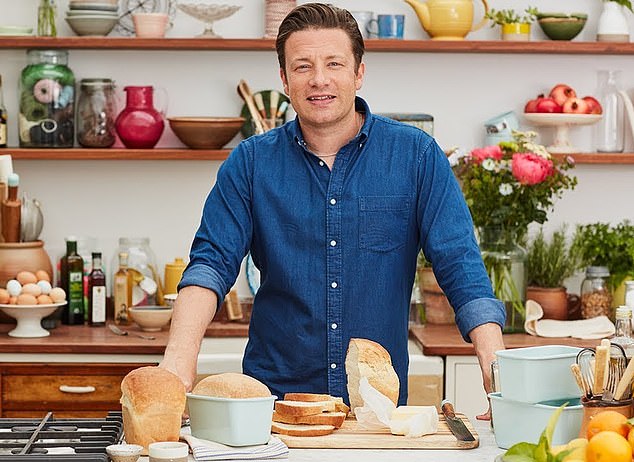 Jamie Oliver (pictured) once told the nation how to ‘correctly’ scramble an egg using nothing but butter, cooked until it’s frothy

MasterChef’s John Torode also uses crème fraiche in his scrambled eggs, while Jamie Oliver advocates nothing but butter. Heston Blumenthal goes low and slow, stirring his eggs in a bowl suspended over boiling water for up to 20 minutes.

As for poaching, while some chefs (Gordon Ramsay, Theo Randall and Prue Leith) advise adding vinegar to the water to stop the egg from separating, others (including Jamie, Delia and Mary Berry) say this is unnecessary. Nigella cracks her eggs into a tea strainer (to get rid of the stringy bits). Mary uses a saucer. While Jamie wraps the raw egg in cling film.

MY METHOD: For runny boiled eggs, it’s got to be the Delia method: simmered for a minute on the heat and then six minutes off. I scramble my eggs with nothing but butter in a saucepan over a very low heat; it can take up to ten minutes.

For poaching, vinegar makes no difference. Use fresh (not supermarket) eggs, swirl the water and simmer for three minutes exactly.

Rice might not sound like it requires a recipe — surely all you have to do is read the back of the packet? — but it’s notoriously easy to overcook.

Jamie Oliver’s ‘foolproof, hassle-free’ method is the most complicated. He starts by boiling the rice for five minutes, draining it, then steaming it in a foil-covered colander suspended over a pan containing 2.5cm of water, for 8-10 minutes.

In contrast, Rick Stein opts for the simpler ‘absorption’ method: just 350ml of water, cooked for 10-12 minutes with the lid on until all the fluid has been absorbed.

According to Great British Chefs, an association of the country’s top culinary experts, the precise ratio is 1:1.5 rice to water. Put the grains in a pan of water, bring it to the boil and then cover and reduce to a simmer — it’ll take 12-15 minutes for the water to be absorbed.

MY METHOD: The absorption method is by far the best, producing soft, fluffy rice.

I measure out 75g per person, rinse the rice and then put it in a pan of water, containing 150ml per portion (so a 1:2 ratio). Bring to the boil, turn the heat down and simmer with a lid on for ten minutes. Fluff it with a fork and serve immediately.

SUPERCHARGE YOUR YOUR SPUDS

If you thought mashed potato was straightforward, think again. MasterChef’s Marcus Wareing tackles the nation’s favourite side dish in his book Marcus Everyday.

He starts by peeling and chopping the potatoes, before boiling them in salted water. When the potatoes are cooked, but not falling apart, he drains them and leaves them for five minutes. Then he puts them back in the pan, off the heat, and adds the butter before mashing.

Gordon Ramsay takes a different approach, heating a pan of butter, milk and double cream and then pouring the liquid over the potatoes once mashed.

When it comes to baked potatoes, Delia knows best: rub them with salt and olive oil and bake in the oven for two hours.

Antony Worrall Thompson pricks his with a fork and gives them just an hour, while Hugh Fearnley-Whittingstall bakes his potatoes not once but twice, the second time loaded with cheese.

As for roasties, all chefs boil their potatoes first — around eight-ten minutes until tender. Jamie Oliver roughs his up in a colander and adds goose fat and garlic; Raymond Blanc, Rick Stein and Tom Kerridge use vegetable oil and sea salt — and Nigella adds semolina for crispness.

MY METHOD: Mash is best made with nothing but butter and seasoning, and I like to add a splash of potato water for an ultra-smooth consistency.

Baked potatoes are better the longer you leave them; rub them in oil and salt, prick with a fork and bake for two hours.

When it comes to roasties, I boil mine first, sprinkle over a handful of plain flour, and then put them into a tray of hot vegetable oil with salt, garlic and rosemary. 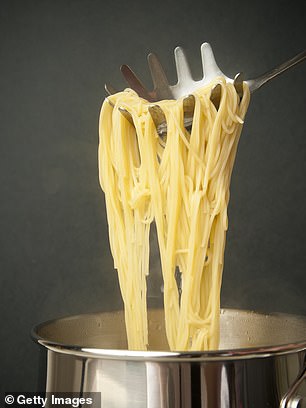 THE SECRET TO SPAGHETTI

He may not be Italian, but Gordon Ramsay swears he has the recipe for ‘perfect pasta’.

His video tutorial for cooking angel pasta (like a thin spaghetti) has been watched more than seven million times.

First, you need a large pan of water, to which you add plenty of salt and olive oil — ‘that stops the pasta from sticking together’ — before bringing it to a rolling boil. Swirl a handful of dried pasta into the water using tongs and cook for three to four minutes.

Other chefs — such as Italian TV cook Gino D’Acampo and Jamie Oliver — shun Gordon’s excessive use of oil.

Nigella agrees; in her 2012 book Nigellissima she says: ‘If you have enough water, then oil should not be necessary.’

To check if it’s sufficiently cooked, she advises tasting it: ‘The pasta should still be firm, though not hard or chalky in the centre.’

Jamie puts a lid on his spaghetti as it cooks to keep the water boiling and always conserves a cup of cooking water to pour over it once drained: ‘A few swigs of that starchy water will really help to loosen the pasta up,’ he explains.

MY METHOD: A few drops of olive oil (not a Gordon-esque glug) in the pan with the pasta will stop the strands from sticking together. All it needs is five to six minutes; the taste test is the best way to check if it’s cooked to your liking.

The trick is to eat it immediately — leave it for longer than five minutes and it’ll go claggy.

Forget tipping a tin of Heinz baked beans on to a slice of toast… several top chefs have had a go at turning the ultimate comfort food into a gourmet dish.

Jamie Oliver’s recipe, from his book Comfort Food, requires cannellini beans and tinned tomatoes, heated in a pan and served on thickly-sliced sourdough.

He’s been serving up beans for years: his London restaurant made headlines in 2004 when it started selling posh beans on toast (made from Heinz beans with cherry tomatoes, spices, rocket and cheese) for £7 a portion — a 2,000 per cent mark-up on a 30p tin. 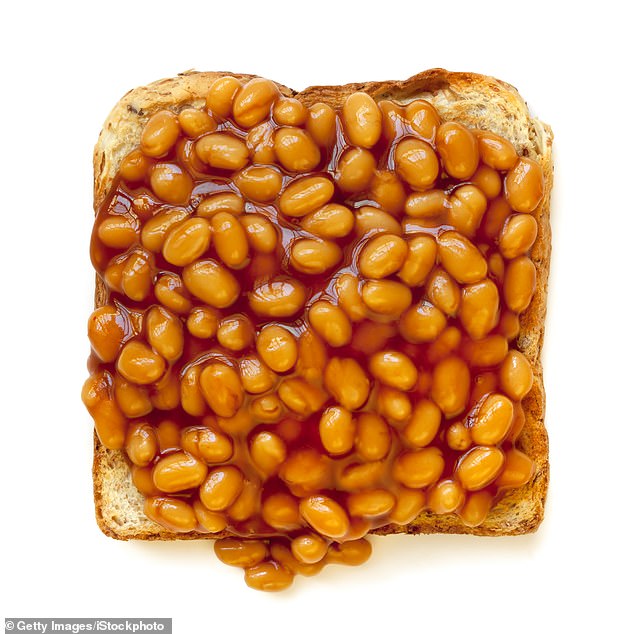 Gordon Ramsay makes baked beans for his family every Sunday. His bean of choice is the haricot, cooked with passata, Worcestershire sauce, onion, sugar and sherry — but the end result looks identical to what comes out of a tin.

MY METHOD: Plain old beans from a tin will do but, if you’re determined to make your own, cannellini beans are best as they soak up all the flavours from that tomato sauce.

When it comes to toast, forget fancy sourdough or soda; thick-cut white is by far the most delicious.