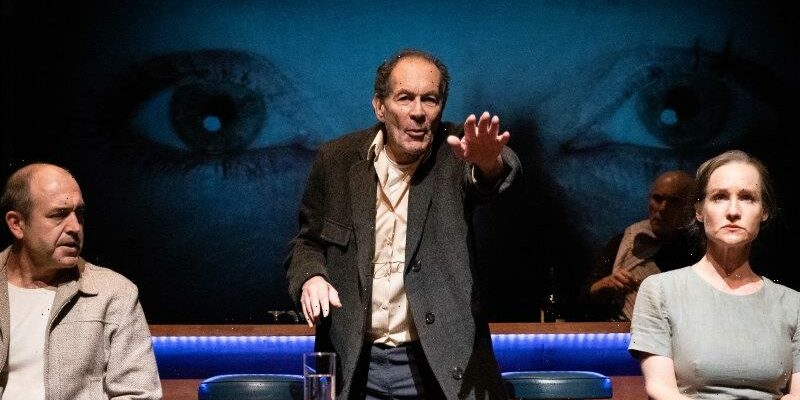 Neo-noir has leapt from the shadows, hard-boiled and hyper-real, to seize the cultural moment. It has conquered television through the likes of Babylon Berlin, a detective series charged with all the desperation and decadence of a dying Weimar Republic. Local publishing has been swept up in it, too, after Jane Harper’s The Dry put a global spotlight on gritty Australian crime fiction. 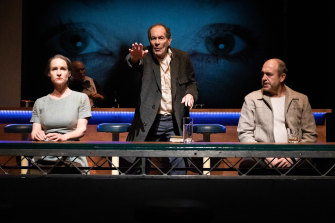 In The Darkening Sky, Richard Murphet revives noir onstage in a work haunted by the ghosts of Melbourne past, weaving a web that spirals around the disappearances of two women decades apart.

At the centre is our narrator, ageing writer James (Brian Lipson). He idly jots in a Melbourne cafe as he begins to recall events leading to his mother, Heather (Edwina Wren), abandoning him as a boy, never to return.

The Darkening Sky is framed by a self-absorbed writer-narrator prone to dominating descriptions of lost worlds. His trip down memory lane is always deeply felt, if often both elusive and overdrawn, and recalls Patrick White’s lopsidedness in A Season at Sarsaparilla.

As with that play, the literary striving in the monologues seems better suited to page than stage, and a ruthless edit would have been prudent. The show blows out well over its advertised running time, and some long-winded passages undermine atmosphere, cutting against the pith and staccato rhythms that define noir writing.

Yet Murphet is also fearlessly ambitious. He captures the past lives of Melbourne’s inner suburbs in a way audiences will find alluring, and behind the suburban veneer lie menacing glimpses of life on the edge – a demimonde of drug-addled students, the spectre of domestic violence, even the sinister cat-and-mouse of Cold War espionage.

The actors seem to relish the noir aesthetic. Some can descend into broad camp at the margins, but others etch indelible portraits from indeterminacy.

The way Wren, for instance, emanates poise and stony conviction over private agony transfigures her into an antihero worthy of a Chandler novel. Hill does something similar, donning the persona of a tough-as-nails grifter to disguise her altruism and a terrible sacrifice.

An elegant set, period costume and expressionistic video sequences augment the murkiness of memory and trauma that suffuses this homegrown crime drama.

You just wish there was more enactment and less narration, even though Lipson is a compelling presence and the interplay with Matthew Connell, as a younger version of James, proves a poignant touch.