Like all art, a piece of theatre is never more perfect than when just an idea: before a word is written. Once the process of making the concept tangible begins, perfection usually has its fall. 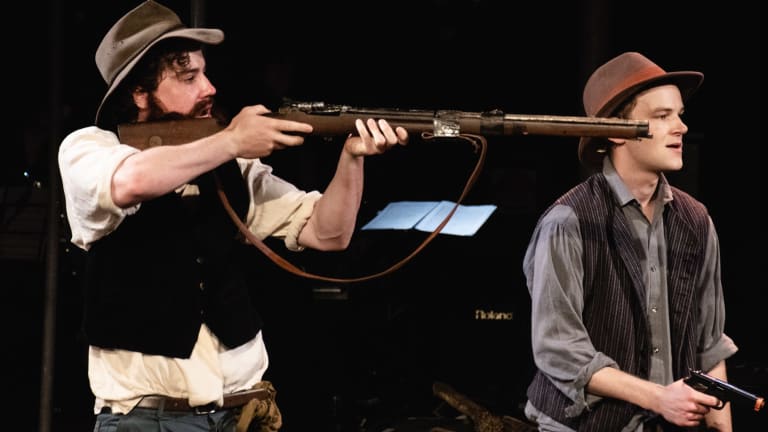 Josh McElroy as Ned and Martin Everett as Steve Hart in NedCredit:Shakira Wilson

The idea of a musical about Ned Kelly is so good that the wonder is it has not been done before. Adam Lyon (music/lyrics), and Anna Lyon and Marc McIntyre (book) must be congratulated for that much. What has resulted contains several elements of a viable, working show.

But it seems the brilliant initial idea became blurred and muddled as it grew into words on a page, notes on a score and performers on a stage.

The issues are ones that confront all who try to chisel a work of fiction or theatre from the hard marble of biographical history. Where do you start? How much of the story do you tell? Which slice of the life contains the essence of the drama? What other characters are crucial? Does the work have a point of view, or is it non-judgmental?

With Kelly the latter point is especially poignant: was he a romantic Robin Hood figure; naturally anti-authoritarian; staunchly supportive of the Irish community in a new land just as hostile to them as their old one? Or was he no more than a thuggish​, thieving cop-killer?

This show presents a Ned whom objective history largely endorses: a Kelly who was not inherently evil, and would not stand by while his family was bullied by a morally dubious constabulary. One crime led to another, and another, until he considered himself at war with the police.

One problem is it tries to tell too much of the story. At the outset, about 35 minutes passes before Ned's mother is arrested, which is the plot's real trigger. Everything preceding that is backstory of dubious necessity.

Another problem is battalions of characters, yet without having the central one illuminated from a fresh angle or in particular depth. There are more gunshots than bullseyes of narrative, character and emotional trajectory.

Miranda Middleton, the show's director (for Plush Duck Productions), found a convincing Ned in Joshua McElroy. He has the physical presence, the alternating flashes of charisma and menace and a substantial singing voice. Without championing Kelly the intent has been to make the character sympathetic, on the reasonable assumption that otherwise you'd have no show.

His execution and its lead-up, however, left me unmoved. It was merely the inevitable endgame in a succession of conflicts.

The writers' instincts were right to propel his mother (Jodie Harris) and two sisters (Siobhan​ Clifford and Cypriana​ Singh) into the foreground, and perhaps there was still more to be made of their dilemmas, and less to be made of Ned robbing banks and having shootouts with the rather blunt-brained constabulary.

Those women were also well-cast, as was Courtney​ Powell as Ann Jones and Marcus Riviera as Superintendent Hare. But the acting dropped away from reasonable to dire in the rest of the 18-strong cast, and having that number of bodies exposed Middleton's limits as choreographer.

By contrast, having that number of voices made for potent moments in Lyon's ensemble numbers, although a few songs raised the emotional stakes artificially. The music's main charm lay in its Irish lilt – something one doubts demanded an orchestra of 15 (under Hamish Stenning) to be realised.