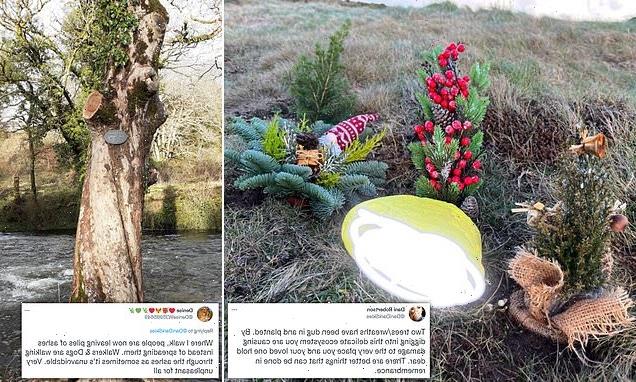 A nature enthusiast who came across plastic items on a memorial to a deceased family member while out walking says people need to find a new way to remember those they’ve lost.

Dani Robertson, who uses the Twitter hand @DaniDarkSkies, posted photos of the memorial, which included small ‘dug-in’ trees with plastic adornments, on Twitter, saying: ‘Two of these items are plastic and have been placed on an exposed headland where they’ve just added to the issue of plastic waste.’

Dozens of people responded in support of her post, with many saying leaving ashes, plastic plaques, flowers in cellophane and wooden crosses were harming the environment. 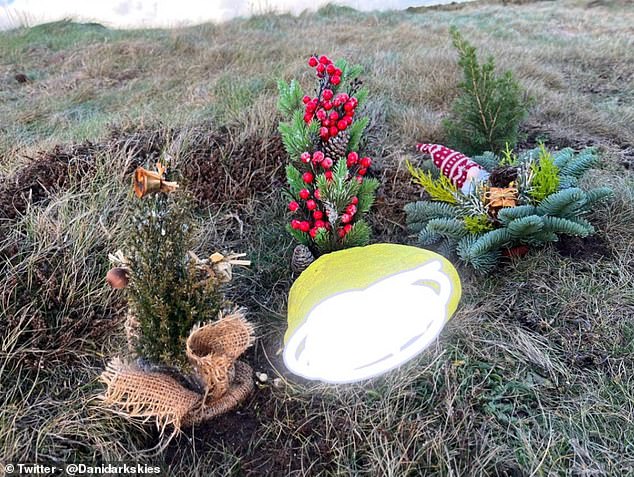 However, one person called the responses to Robertson’s tweet ‘out of touch’ saying those complaining about such tributes should consider the expense of a traditional headstone, saying ‘pick ’em up by all means but don’t sneer’.

Sharing the photos, Robertson wrote: ‘I understand it is so painful to lose a loved one, and naturally we have their favourite places we go to remember them. Please don’t alter those favourite places (unless you have permission)’.

She added: ‘It’s really sad, misguided grief. To cause a death to wildlife through grief is such a tragic irony.’ 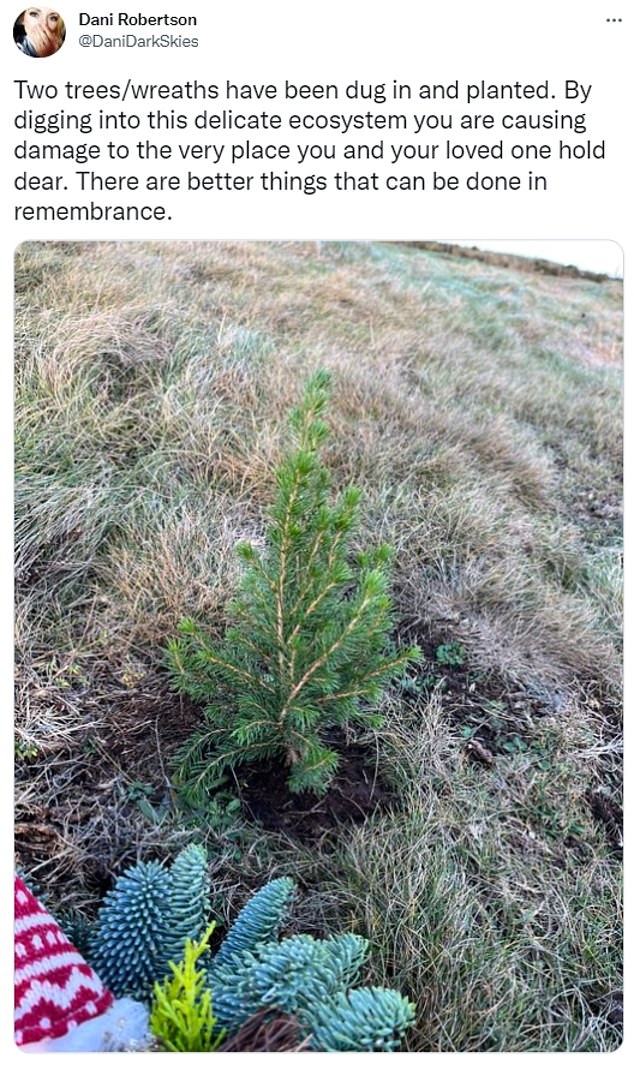 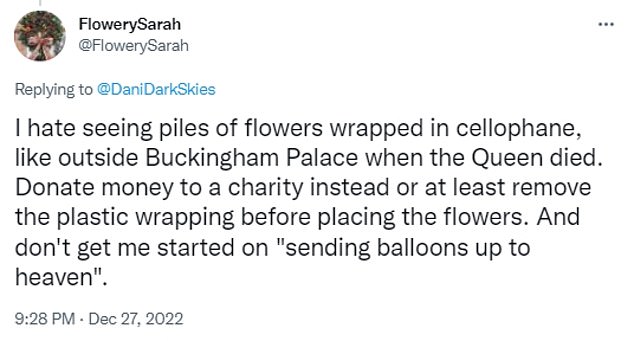 Her original post, which has been viewed 289,000 times saw dozens of responses from people who agreed, with many referencing floral tributes left in London’s parks in memory of the Queen following her death in September.

@FlowerySarah said: ‘I hate seeing piles of flowers wrapped in cellophane, like outside Buckingham Palace when the Queen died. Donate money to a charity instead or at least remove the plastic wrapping before placing the flowers. And don’t get me started on “sending balloons up to heaven”.’ 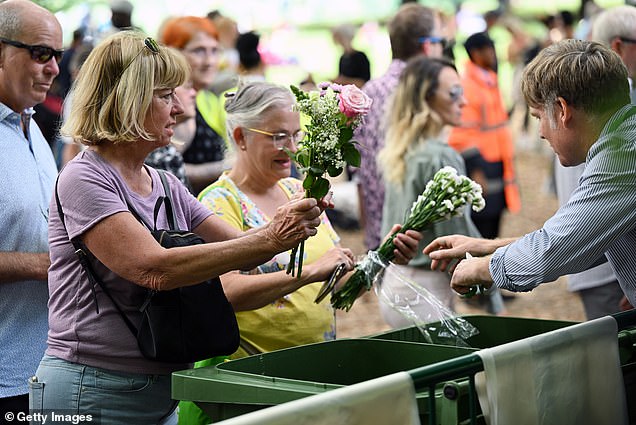 Following the late Monarch’s death on September 8th, a clean-up operation had to take place in Green Park in central London to remove plastic wrappings from the thousands of floral tributes laid.

The Royal Parks, which manages the official site for tributes in Green Park, asked mourners to only ‘lay organic or compostable material’ and remove any wrapping from the bouquets being left.

They also said that while people could bring teddies and soft toys if they wanted to, they would ‘prefer that they didn’t’ for sustainability reasons. 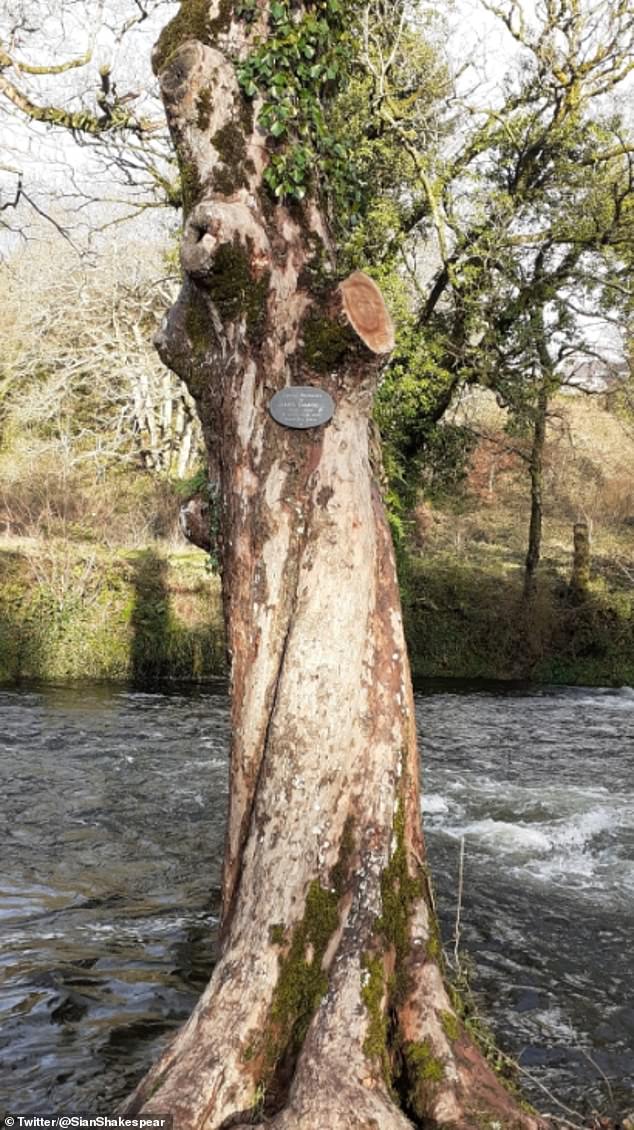 One nature fan said she had changed her mind about memorial tributes, which she’d previously considered ‘selfish vandalism’ in wild spots after seeing her friend leave a plastic flower in memory of her late husband

Others said they’d felt uncomfortable walking through ashes that had been left. @DeniseW35985649 wrote: ‘Where I walk, people are now leaving piles of ashes instead of spreading them. Walkers & Dogs are walking through the ashes as sometimes it’s unavoidable. Very unpleasant for all.’

@Raichyrae defended those who leave memorials in the great outdoors, saying: ‘I sense that some people are out of touch with the cost of graves/headstones – they’re expensive, we’re in a pandemic, we have 100s of 1000s of extra deaths, NHS on its knees and a cost of living crisis- that’s why all the temp memorials. Pick ‘em up by all means but don’t sneer.’ 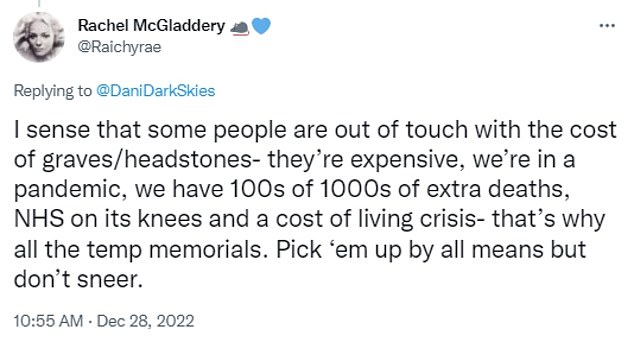 One person admitted that they didn’t know how to safely spread the ashes of a deceased family member. @yoshaza wrote: ‘As a family of deep sadness of a sudden loss. And following the request from our bro we had to look into how we can do his ashes!

‘To pour into the canal was totally okay but to pour on land we would have to have permission!! But at least he/we have somewhere he wanted!’

Currently, ashes can be scattered in the UK on your own land or a body of water without permission but leaving ashes in public – such as a local park or beach – or private land require the consent of the owner or council.