Having frocked up as Queen Elizabeth II for 40 years and with a new show about to open at Hayes Theatre, Gerry Connolly has a keener interest than most in the continued health of the 93-year-old monarch.

“It’s a race against time to get a decent show up before she goes down,” he says. “With all due respect, we’d like her to be happy and glorious for a few years yet so we can tour this.”

The show, The Rise and Disguise of Elizabeth R, charts Connolly’s four decades of “doing” the queen and his curiously intimate relationship with one of the most famous women in the world. It’s been co-written with Nick Coyle and Gus Murray and directed by Shaun Rennie. 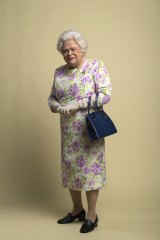 Gerry Connolly has been frocking up as Queen Elizabeth II for 40 years.Credit:Nick Moir

“It’s alarmingly fresh and brings a new eye to my situation,” says Connolly. “It’s a generational shift. The whole creative team is all young Turks, theatre-makers, artists … I’m the old boy they push around the stage.”

And the royals remain the comedy gift that keeps on giving.

“We’ve had to get a new frontloader and forklift to move all the material around the writers’ warehouse,” says Connolly. “We’ve been inundated with Megxit and trying to incorporate that. And now Wills and Kate are coming out here at great expense to look at people’s misfortunes…”

Connolly’s reign began in a student review at the Queensland Conservatorium in 1981 where he was studying piano.

It was an era in which the royals were accorded much more reverence than now, making him the frequent target of royalists.

“I got hate mail when I did a TV show at the ABC in 1988,” he says. “It was not just old biddies but young fogies as well. Some of them wished cancer on me and a woman stopped me in the street in Adelaide and said, ‘You’re a coward!’ There was all sorts of umbrage taken. The queen was almost a divine figure.

“Then we had the turmoil of the ’90s where the royal stocks were right down with Fergie, and Charles wanting to be a Tampax and all that business. The tables turned after August 1997 when the biggest star in the royal family died and the queen’s fortunes have risen ever since. And now she is such a venerable age she’s greatly revered just for being there.”

Connolly believes he has much more in common with Elizabeth Windsor than a penchant for pastel colours and flashy headgear. He imagines she is playing a role just as much as he is when he steps on stage.

“I do have great affection for Lillibet who has to play the queen on a daily basis,” he says. “She has to be admired for her staying powers and trying to rise above it. But I wonder if she is sick of it.”

He’s never met his alter ego and doesn’t expect to but if he ever did he has a strong suspicion of how it might go.

“Her go-to phrase is, ‘How interesting’. I suppose she would think that I was interesting. Nothing more or less.”

The Rise and Disguise of Elizabeth R opened at the Hayes Theatre on February 13.