John Olsen is the subject of an explosive memoir penned by his son, who accuses the artist of multiple infidelities and building his creative career at the expense of the family he left behind.

Tim Olsen's book Son of the Brush, published this week by Allen & Unwin, and launched Wednesday evening at the Art Gallery of NSW, also paints a picture of an art world corrupted by fraudsters, sycophants and unconvicted sexual predators. 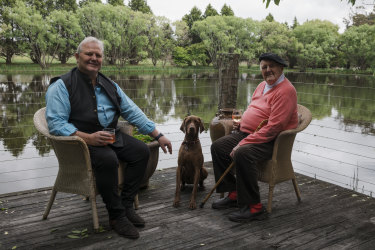 "I didn't want to have to write those things … but I had to put the stains in," said Olsen, the founding director of the Olsen art gallery in Sydney’s Woollahra.

"I couldn't bleach anything out that was going to sanitise the depth of… how cruel human beings can be to each other."

He completed it five years later but had to hold publication until the conclusion in August of bitter court proceedings between his father and his estranged step-sister Karen Mentink, who was found to have acted unconscionably in trying to to procure $2.2 million from her terminally ill mother, Olsen's fourth wife, Katharine.

In his memoir Olsen opens up about the bohemian, celebrity-studded childhood he shared with his younger sister Louise, co-founder of Dinosaur Designs.

But he also details assaults and bullying he faced, largely at the hands of other children, the dark side of the "boys club" art world he grew up in, his interactions with self-confessed paedophile, the late artist Donald Friend, and his struggle to emerge from the shadow of his famous father, arguably Australia’s finest living artist. 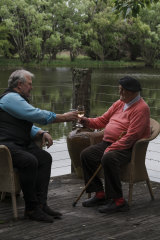 After many years Tim Olsen and his father, artist John Olsen, are reconciled.Credit:James Brickwood

Olsen descended into depression, morbid obesity and alcoholism yet he always knew that his father loved him and says he now understands that he never meant to upset him.

"To be an artist requires a certain level of selfishness and keeping your environment right for you to work. If you look at the lives of the children of many great artists – it's very much a thing," he said. "There's a term in psychology, they call it the wounded child. Through writing this book I had to go back to that child and say, 'Everything's OK. You're safe now'," he said.

Olsen now describes himself as a "grateful alcoholic" with over nine years' sobriety behind him.

"My mother is the reason why I'm still alive," he said of the artist Valerie Strong, who died in 2011. "She was my guiding light in regard to keeping my feet on the ground and understanding that all the success that my father achieved really didn't add up to much, other than it corrupted him as much as it served him."

As an art dealer, Olsen has had a record sales year despite, or perhaps because of, COVID-19. He has gallery space in New York, is negotiating to open a gallery in London and now also represents the work of his father.

"He wouldn't exhibit with me until he saw that I had a serious stable of artists that he would fit into. Look at any other dynasty… it is never easy," Olsen said of working with his father.

John Olsen has read the memoir and says he was "totally unaware" of what his son had gone through. He wonders whether he should have known, given the troubled parent-child histories of his contemporaries such as Arthur Boyd and Charles Blackman.

"I dare say that it could happen to any child of a man that's successful," the artist added. "All families are difficult."

"The family is reunited – we work together, we love being around each other, we cook, we have conversations, we can be brutally honest with each other," the younger Olsen said. "If one was able to choose their parents before they were born, I think my sister and I chose very well."