“Remember the time I left you waiting?”

My hackles were up. I could feel one of my dad’s awkward apologies coming.

We sat on a Monterey cypress branch bent low by a Pacific wind: me at 35 with curly red hair and blood-red lipstick; Dad looking younger than his 58 years with his trim physique and tattoos. Other people in the park were playing with dogs or talking to neighbors. I envied their simple pleasures.

“You must’ve been 12,” my dad said. “I came to the city to see you, and I was supposed to pick you up at the library to go to a museum. I was like an hour and a half late. Let me tell you ― you were pissed.”

The memory hit me. At 12, I was still in my cat sweatshirt phase. Visits with my dad were rare, so anticipation had built over weeks. The main library was in a rough area of San Francisco teeming with unhoused people, some of whom were visibly agitated. Sitting on granite steps littered with cigarette butts and old gum, I grew queasy with worry and disappointment.

In the park that day, my dad explained that he’d recently started a 12-step program to recover from an addiction to pornography — which, apparently, had made him late all those years ago. The fourth step involved finding people harmed by the addiction and asking their forgiveness.

“I’m so sorry I wasn’t there for you,” he said. His eyes were the washed-out blue of melting icebergs; liquid trickled down his cheeks.

Over the years, my dad had apologized dozens of times for his absence during my childhood — each unburdening more emotional than the last — but none of it seemed to be for my benefit. This apology was meant to further his own progress in therapy. Leave it to my dad, I thought, to put the selfishness in self-help.

We were close when I was little.

He’d hoist me onto his shoulders, and I’d sail like a seabird riding a thermal. He shared his fondness for language by reading me “Alice’s Adventures in Wonderland” and “The Hobbit,” pronouncing each phrase with care. I loved his dad smell: cedar and sandalwood with a musky undertone.

My dad was obsessed with personal growth, even back then. He studied herbalism and tantra, and meditated before an altar arranged with multicultural idols: a Paiute rattle, a Tibetan singing bowl, a dancing Shiva.

After my parents divorced, Mom and I moved back to San Francisco. Dad stayed in the small town he loved, three hours north of the city. In my new bedroom, I decorated an end table with crystals, figurines and photos of my dad — a 9-year-old’s idea of the altar he kept. Whenever I heard Mom answer a phone call from him, I screeched “Daddy!” and hopped around until she handed me the receiver.

For weekend visits, Mom drove me halfway, and I switched cars in the parking lot of a roadside diner. Dad occasionally came to the city, but there were many cancellations. Some part of me will always be watching for his car on a drizzly afternoon, knowing in my bones that he won’t show up.

I eventually took my altar down and put a lamp in its place.

Even after my mom and I moved closer — an hour from my dad’s doorstep — I saw him only two or three times a year.

I went goth at 14. That got his attention.

The crashing music and spooky videos horrified my dad. I doubled down by painting my bedroom black. Over the phone, he lectured me about the negative energy I was manifesting — a reaction that infuriated me but also scratched an itch. 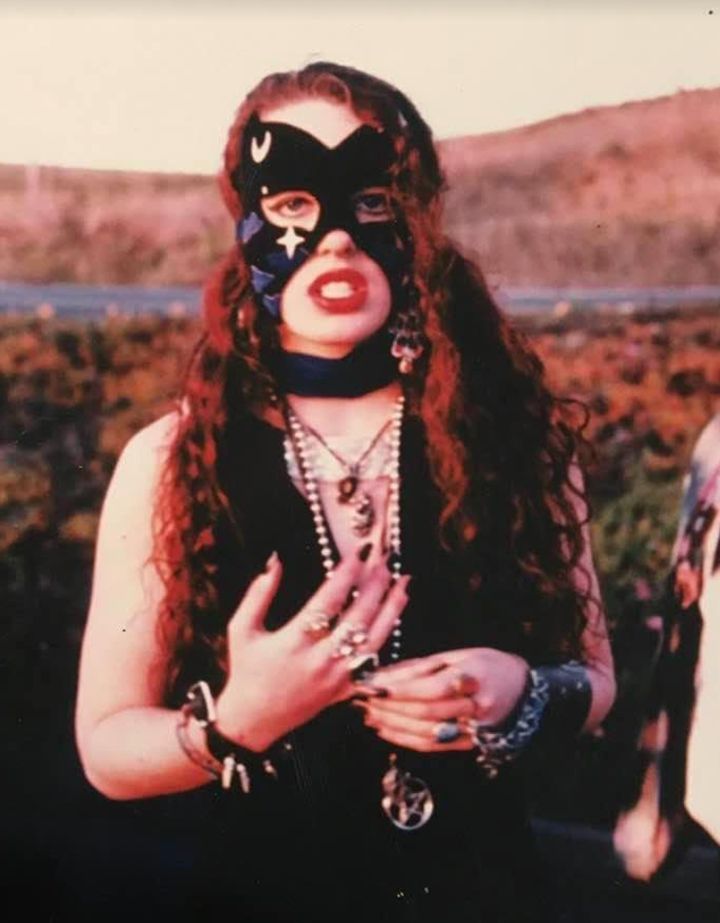 At Christmastime, he stopped by to exchange presents. Standing near our blinking tree in a puffy coat, looking ready to bolt, he came out of the closet to me for the first time.

“I’m attracted to men,” he said. “It’s something I’ve struggled with for many years.”

I slouched on the sofa in my mask of cheap makeup, unsure how to react. A steel gauntlet with heavy chainmail covered my left wrist and hand — literal armor.

Months later, my dad disavowed his bisexuality, insisting that it signaled an imbalance of yin and yang energies. He came out of the closet again, then went back in. This vacillation continued for decades. That my dad was somewhere on the LGBTQ+ spectrum didn’t upset me, but the confessions became exhausting.

One morning when I was 16, I awoke in a rage. Pacing the black AstroTurf carpet in my black bedroom, I yelled into the phone that if he’d cared, he would have stuck his thumb out and hitchhiked when his car failed. He would’ve found some way to participate in my life. He’d given up too easily.

My dad offered familiar explanations for not being there: his work schedule and money problems. His own father had died when he was little; no one taught him how to be a dad. I had a horn, the kind circus clowns used, and every time he repeated a well-worn excuse, I squeezed the bulb into the receiver — honk! honk!

Ridiculous, I know. What kind of goth uses a clown horn?

He said he was sorry, but I didn’t want another apology. I wanted him to travel back in time to fill the empty space shaped like him. I wanted to remember my dad as a presence, rather than an absence.

I cut off communication after that. We eventually patched things up enough to resume our occasional outings to museums, but I had stopped wanting to be close.

Meanwhile, my dad went down the self-help rabbit hole, frequenting therapy groups and weekend retreats. From then on, his visits were missions directed by gurus and therapists. Once, when I was 19, he showed up unannounced with a gigantic bouquet of flowers. While other men from his therapy cohort waited in the car, he kneeled and tearfully apologized for his absence.

Then he got back in the car and drove away.

I resented these performances. He’d missed every birthday and sore throat since the divorce. Yet he carried out his self-help directives with the seriousness of a soldier. The orchestrated confessions left me feeling used.

Sitting on the warped cypress branch in the park, I gritted my teeth while he apologized for the library incident. Then I returned to regular life — never dreaming that this might be the beginning of real change.

My life was good. After years of dating emotionally unavailable men, I’d married a loving guy who showed up for me, as I did for him. We both belonged to a vibrant arts scene in San Francisco. Every month, I emceed a popular literary competition for a crowd of some 200 book nerds. I rarely thought of my dad anymore.

Shortly after our talk in the park, he phoned to say he wanted to come to my show. I felt wary. I needed to entertain a crowd, not confront my past. But I said OK, figuring he wouldn’t show up.

But there he was in the audience, smiling over a beer. Afterward, he came to dinner with me and my friends. With his tattoos and quirky interests, my dad fit right in. He slept on my sofa-bed and left the next morning without drama. I didn’t know what to think, but I invited him to the next show, and he came again.

This became a routine: He’d drive three hours, socialize with my crowd and sleep in my living room. We didn’t rehash past arguments, and he stopped apologizing. These nights out infused our conversations with fresh material and revealed new common ground: a shared fascination with the artistic process, an eagerness for novelty and adventure. I found myself enjoying his company — not as the father I’d yearned for as a kid, but as a peer.

Ever so casually, he slipped into my world. 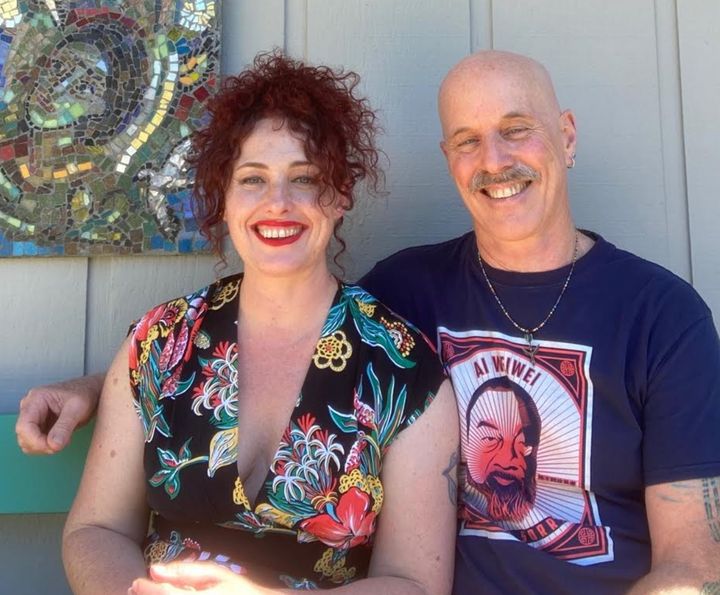 One month, he brought his new boyfriend, a bisexual hippie like himself. They stood together in the audience, holding hands. There was something magical about watching my dad share affection with another man in public, seeing him give the war inside a rest.

A knot in my chest loosened in response.

I liked this version of my dad — one whose actions matched his words. Perhaps all those years of therapy and self-help were paying off. Not only was my dad suddenly showing up for me, he was also showing up for himself.

After our long estrangement, traditional father-daughter roles didn’t suit us, so we created a friendship that does — one that has deepened over time. I’ve learned to trust that my dad will be there for me.

On a warm day in September 2019, my dad and I stood on the deck of a ferry boat, crossing the Strait of Gibraltar from Spain to Morocco. Late afternoon sun sparked over the Mediterranean water. If you’d told me that day in the park that my dad and I would someday travel internationally together, I wouldn’t have believed you.

As the ferry eased past the Rock of Gibraltar, my dad yelled at the top of his lungs, “This is incredible!” We tried to take a picture together on the deck, but my hair was whipping my dad’s face so violently that we just ended up laughing and the photo came out a mess. My dad framed it anyway.

He couldn’t be the father I needed as a child, and I couldn’t be the daughter he wanted as a younger adult. In dissolving the roles we’d been trying to force one another to play, we allowed our stunted relationship to blossom in unexpected ways. We are family, of course, and always will be. But we’re also more than that now.

Alia Volz is the author of the bestselling memoir “Home Baked: My Mom, Marijuana, and the Stoning of San Francisco,” finalist for the 2021 National Book Critics Circle Award and winner of the 2020 Golden Poppy Nonfiction Book Award. Her work appears in The New York Times, “The Best Women’s Travel Writing,” Bon Appetit and “The Best American Essays.”

Do you have a compelling personal story you’d like to see published on HuffPost? Find out what we’re looking for here and send us a pitch.