I have a really bad habit of comparing people to one another — myself included, TBH. I compare the way my friends treat one another to how they treat me, the relationships my parents have with my siblings to the one they have with me, and admittedly… sometimes I compare my current boyfriend to my ex. I swear it’s not on purpose! But in an effort to put my bad habit to good use, I asked an expert to analyze my body language with my ex compared to my current partner, and to my surprise, she found some very similar body language cues within both of my relationships. It was pretty shocking to hear, because the relationships were both so vastly different.

But before we dive head-first, some background: Ralph* and I were really good friends in high school. We ran in similar circles and lived five minutes from each other, so we were close even prior to dating. We were together for two-and-a-half years, and although it was a nice run, we just weren’t cut out for forever.

Alejandro (Ale for short) and I met last September. We were immediately attracted to each other, but I didn’t think our relationship would develop into anything more than casual. To my surprise, we’ve been together a year now, and I’ve never been happier. When analyzing my body language with my ex and comparing it to my current boyfriend, body language expert Blanca Cobb found that when I’m in a relationship, I am all in. But she also found some pretty striking similarities in my body language with both guys, and it really surprised me.

Ralph And I Were Close 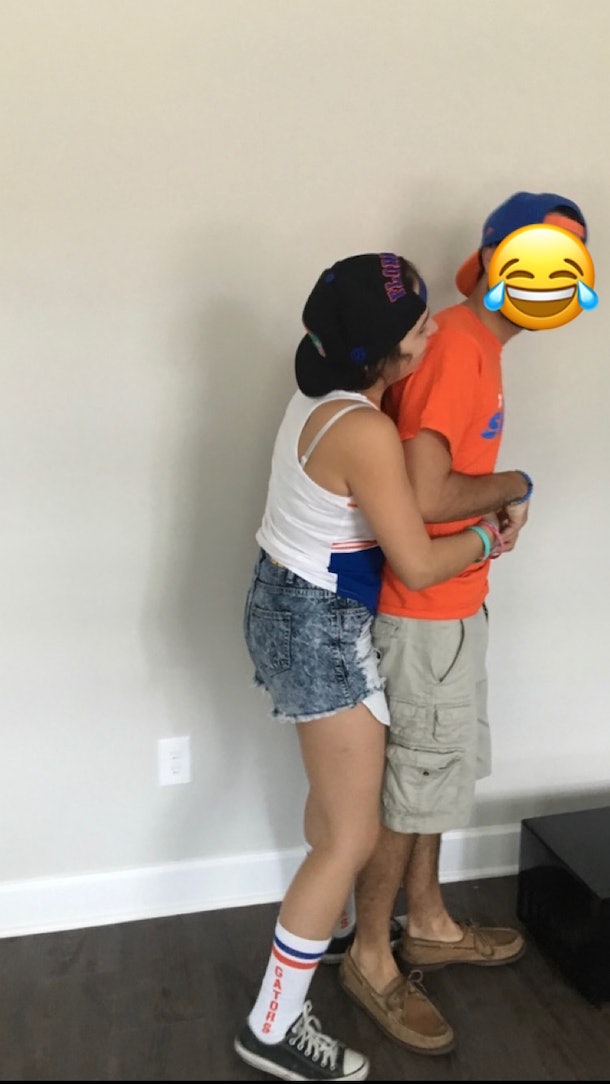 Because Ralph and I were friends first, we were close, and that showed in our body language. "You’re completely behind him. You’re wrapping your arms around him. There’s no air getting in between these two bodies here. You’re pretty close," Cobb tells Elite Daily. And for some time, there really was nothing that could come between us. We were in a long-distance relationship, so whenever we saw each other we were practically inseparable, but when we were apart we texted all day, every day. It sort of worked for us, but looking back now, I don’t think I could do it again. For me, constant communication all day long was exhausting. At the time, this gave me the confirmation I needed that Ralph was interested, but now, even though Ale and I are in a LDR too, I don’t feel the need to be talking to him all day. I feel much more secure in my relationship, which I can’t say about my dynamic with Ralph.

There Was A Bit Of Tension Between Us 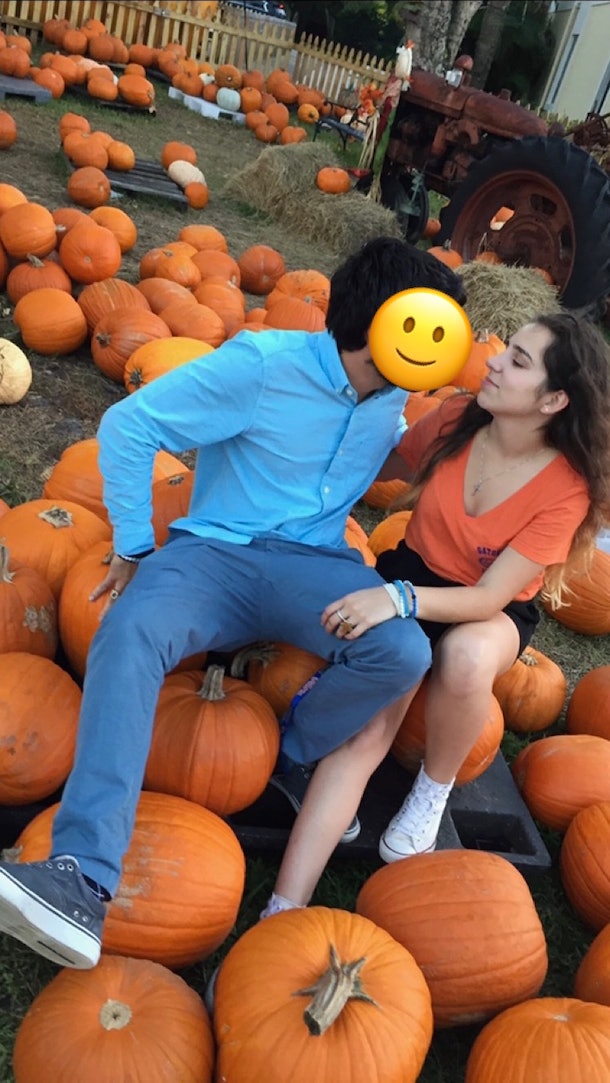 Although Ralph was a loving boyfriend, I often felt suffocated by his affection. It almost felt like he was too into me, and somehow, it was a turn-off. He would constantly tell me he loved me, and wanted to FaceTime or talk on the phone every night. I was overwhelmed, and it caused a lot of tension between us. Cobb says you can see this tension in the above photo.

"He’s leaning back a little bit," she says. "He has his hand on the pumpkin. Look at his right leg, which is outstretched. I wonder if there’s a little tension going on because that’s not a relaxed way to have your foot. Maybe it’s just because of how his leg is laying on the pumpkin. Although, your hand looks comfortable. You see the natural curvature of your fingers of your right hand laying on the inside of his thigh. When you’re touching the inside of someone’s thigh like that, there’s definitely a level of intimacy."

Cobb’s analysis of this photo tells me that even though we had our issues, our relationship was still a loving one. He was my best friend, and it shows, but there was always something missing.

But We Were Comfortable Together 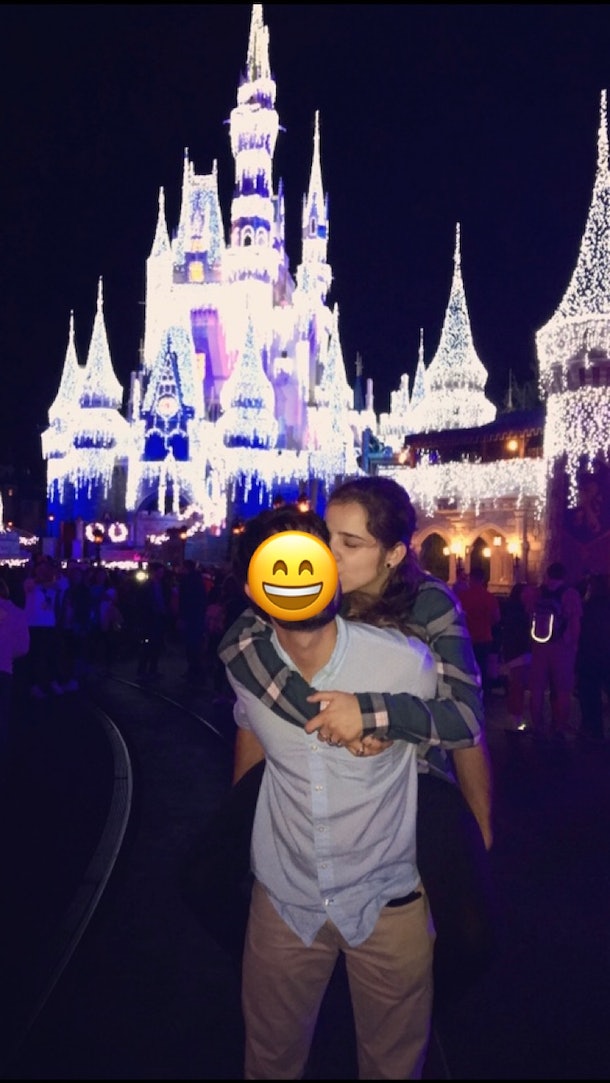 This was a really sweet moment we shared. It was the first (and only) time I went on a trip with Ralph’s family, so we were both really excited. "Just look at your faces, eyes closed, totally in the moment," Cobb says. "He’s enjoying it. You’re puckering and giving him a kiss. I think it’s a very tender moment between the two of you," and it was.

Eventually, My Loss Of Interest Started To Show 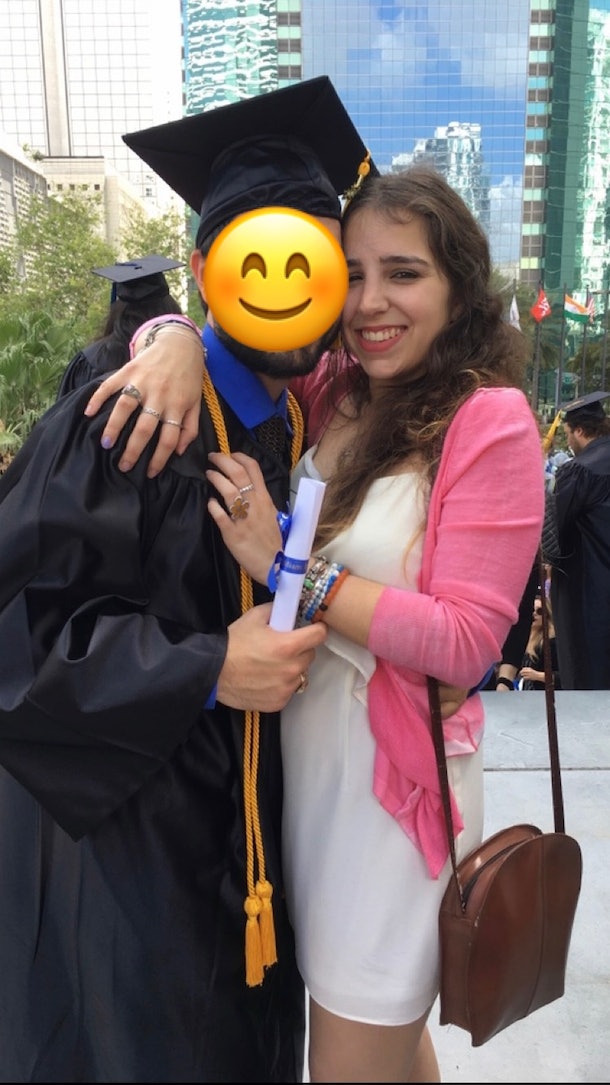 Over the span of our relationship, my feelings for Ralph came and went in waves. Sometimes I was totally into him, and other times, my mind wandered to other people or even to just being single. I could never quite put my finger on why. He did all the right things, but my heart just wasn’t fully in it, and that showed in ways I never would’ve thought.

"You’re really close to each other — the way he has his hand wrapped around your back — but what was interesting is your hand. Look at your left hand. Your fingers are not flat against his chest. Your fingers are curved a bit. There wasn’t full contact there, and it makes me wonder: Was something going on? Was it too much closeness?" Cobb says. "Your right shoulder is up on him, but your left shoulder is back. You have a polite smile, but it isn’t a very big smile like I’ve seen in other pictures." And understandably so. This picture was taken two months (almost to the day) before I ended things with Ralph.

My heart hadn’t fully been in our relationship for a while — it just took some time for me to accept it. He hadn’t done anything wrong, and that made the idea of breaking up with him so much harder. It just wasn’t working out, and it wasn’t fair to either of us that I waited as long as I did to finally end things with him.

Ale, My Current Boyfriend, Is Completely Into Me 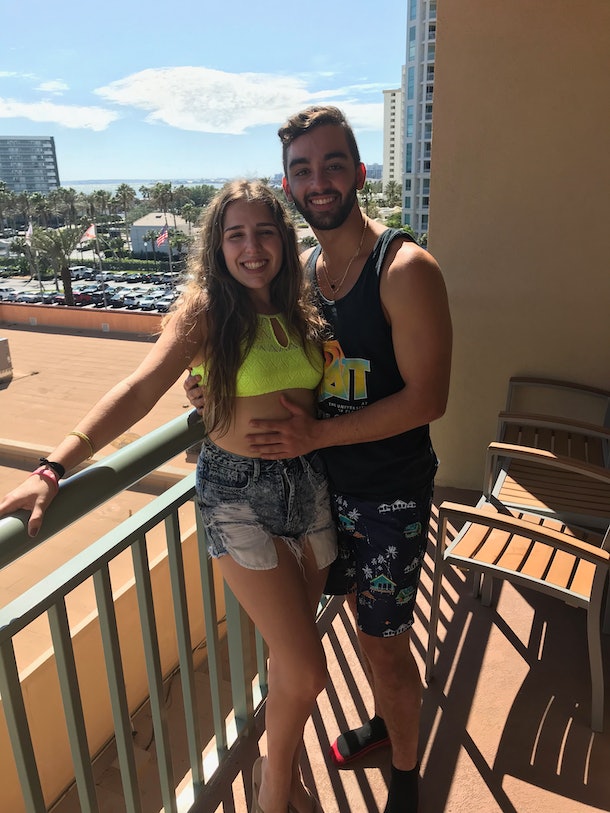 This picture was taken during the peak of my and Ale’s honeymoon phase — about one month into our relationship. "He’s completely into you," Cobb states. "Look at both of his hands. One’s on your belly and then the upper back, on the back of your [bathing suit]. The reason I like that is because he’s focused completely on you, and it’s like you’re the center, that’s what he’s holding onto. Look at his body. From his shoulders, all the way down to his feet, what’s he looking at? What’s he facing? He’s facing you."

With him being as into me as his body language reads, Cobb says she’s not surprised I was feeling as comfortable and confident as my body shows. "You have your arm on the rail. You’re taking up some space. You’re feeling pretty good," she elaborates. "I don’t see how you couldn’t feel good when you have this guy who’s so into you." Aaaaand now I’m blushing. 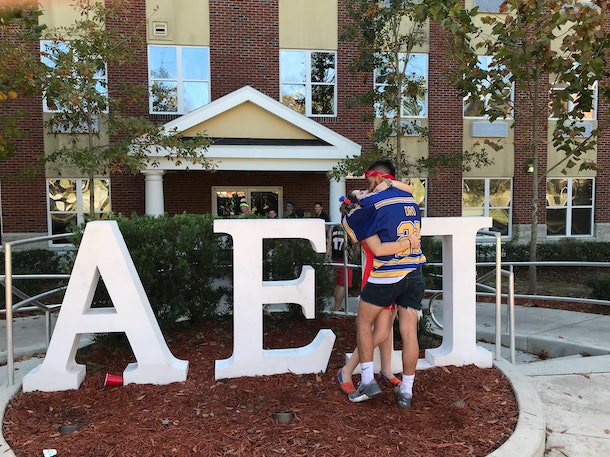 "You’re both totally into the moment," Cobb says, of this picture. "Look how you’re kissing. Look how you have your arms wrapped around him. I can’t see his arms, but I’m more than positive they’re wrapped around you," she says.

The way our bodies are leaning into each other also shows how we were quickly falling in love. Cobb points out that our pleasure zones, as in our "private areas," were touching. "They’re face-to-face there and all the way down, and that’s what you see with couples in love. Couples in love, they should show their physical affection for each other, and physical affection doesn’t necessarily mean sex. It can just be intimacy."

I’m Completely Into Him, Too 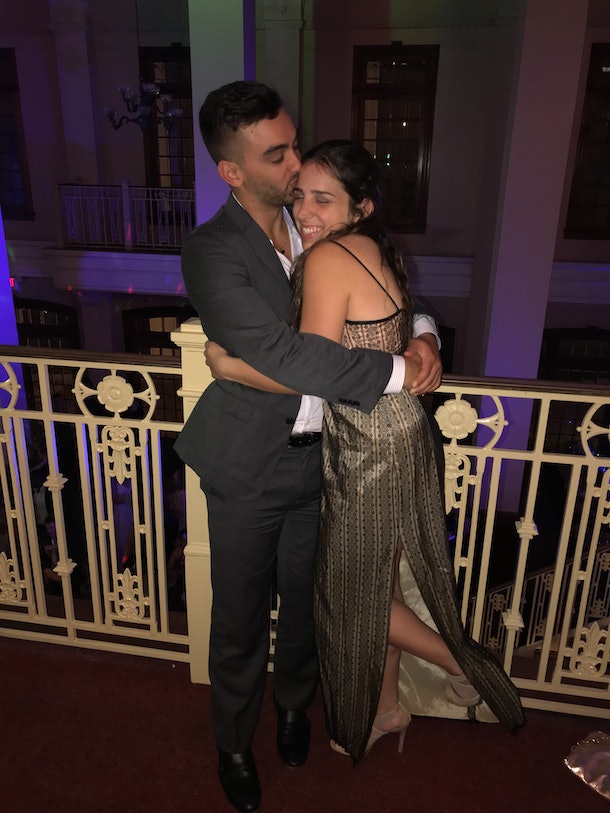 This picture was taken six months into our relationship, and I was still as into him as I was one month in.

"You guys are cute with the eyes closed," Cobb says. "You’re in the moment. It’s another way of experiencing a situation. I like it. What I like [is that], you’re both hugging each other tight, pulling each other tight. I like that he’s giving you a kiss on the forehead. You are completely into him, from shoulders all the way down to your feet. You’re completely facing him."

I’m His World, And He’s Mine 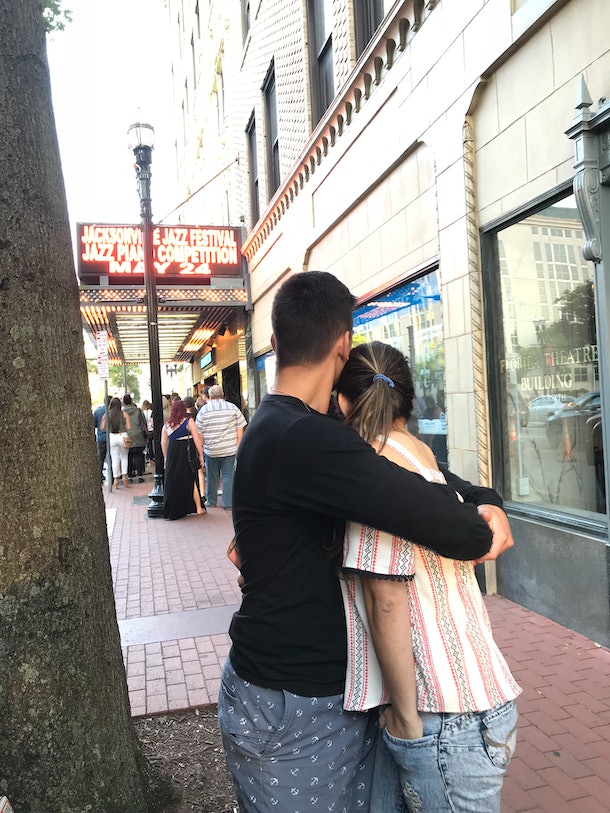 In this picture, Cobb points out that our pleasure zones are facing each other, hinting at our intimacy again. "I mean, you’re his world," she says. "Look how he wraps both arms around you. He almost has like a death grab around his other arm, right? His left hand on his right arm to make sure that he has a good grip on you." And by golly, I am here for it.

Going into this experiment, I was excited to hear what Cobb was going to say, but I can’t say I wasn’t a little nervous. The idea of diving into my and Ralph’s relationship dynamic was intimidating. What if my body language and my heart weren’t on the same page, and my body language showed I was happier with Ralph? It was nerve-wracking, to say the least, but that wasn’t what Cobb found at all.

"I think for a period of time, even with your ex, I think things were pretty good," she points out — and they were. There’s no denying that. "In every relationship, there are going to be bumpy roads." But there doesn’t have to be tension, and with Ale, there isn’t. Of course we have our own set of issues — who doesn’t? But it’s how you face them, and if you think they’re worth facing, that can make all the difference. "I think when you love, you give with all your heart," Cobb says. "You’re all in in your relationships." Honestly, I don’t know what other way there is to be.

*Name has been changed.