‘Every kick gave me motivation’: Mother who beat anorexia reveals how her unborn baby saved her life after her weight dropped to less than four stone and she suffered a heart attack

A woman who battled anorexia in her teens and saw her weight plummet to 3st 12lbs has revealed how her unborn daughter saved her life.

Jade Kyle, 26, from Fife, Scotland, developed the eating disorder when she was 14 and survived on just an apple and two bottles of Pepsi Max a day.

After she suffered a heart attack, doctors warned she was close to death and her chances of conceiving were incredibly low.

But when Jade fell pregnant in October 2016, it was the news she needed to shock her into recovery.

The full-time mum-of-one, said: ‘My baby girl saved me. It was a miracle that I’d fallen pregnant and, every time I felt her kick, it gave me the motivation I needed to stay healthy.’ 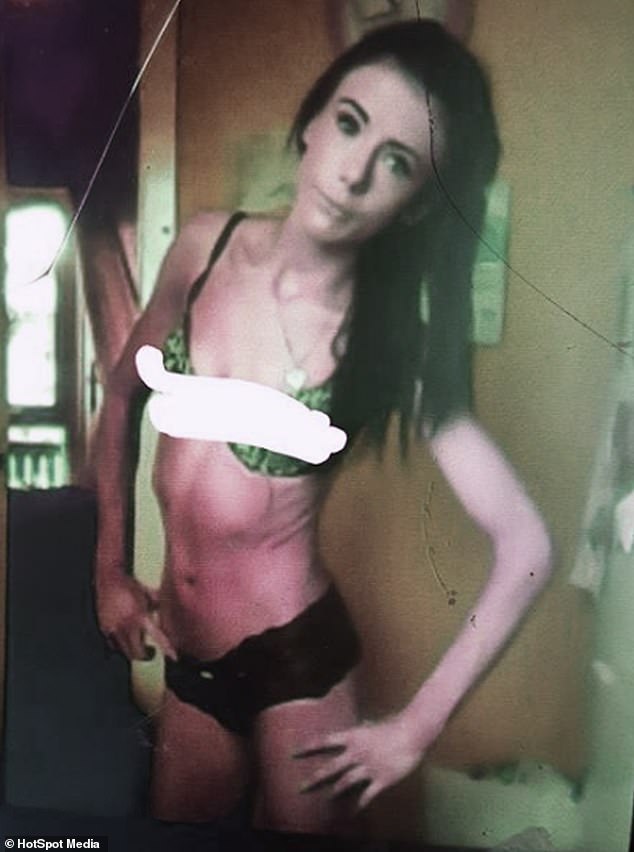 Jade Kyle, 26, from Fife, Scotland, pictured while she weighed 4st 7lb, developed anorexia  when she was 14 and survived on just an apple and two bottles of Pepsi Max a day 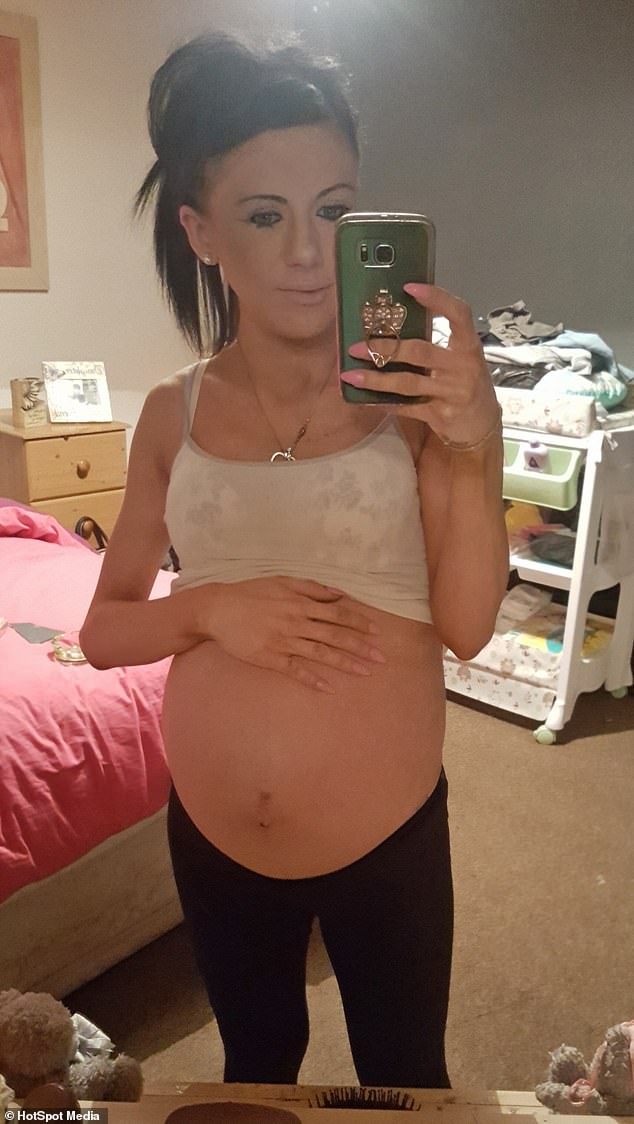 When Jade fell pregnant in October 2016, it was the news she needed to shock her into recovery. The mother-of-one pictured when she was nine months pregnant 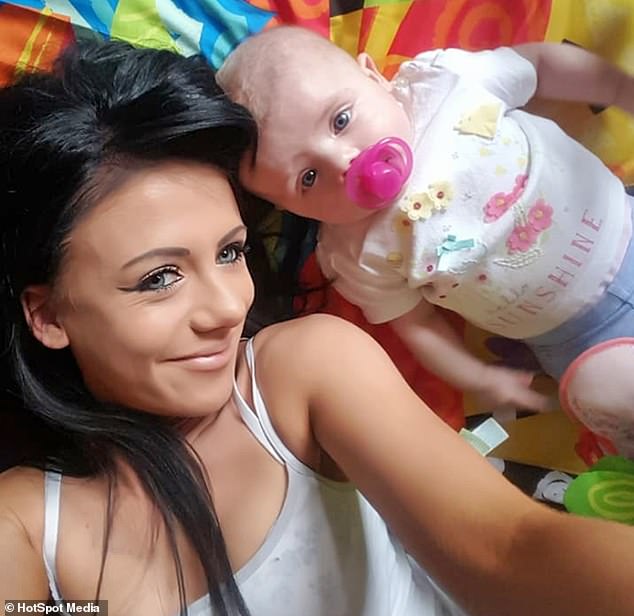 Jade was warned by doctors that she might never be able to conceive, but now she is a proud mother to Isabella, now 18 months old

In 2006 when Jade was 14, she stopped eating because she felt ugly. Then a size 8, Jade’s weight dropped dramatically she only consumed less than 100 calories daily.

Jade says: ‘I became obsessed with food, even watering down soup and milk. I’d chew up my dinner and spit it out into a bag which I hid in my bedroom in a bucket.’

At 5ft 2in, Jade’s frame dropped dramatically and she hid her skinny body in baggy clothes.

By December 2009, Jade’s mum, Elaine Kyle, 54, noticed a fly infestation in the bag where Jade had spat out her chewed-up food. 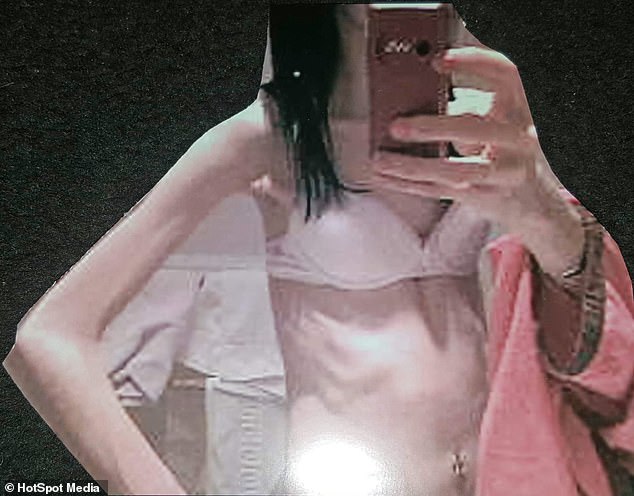 Jade’s weight dropped dramatically  as she only consumed less than 100 calories daily, and at her worst she refused to brush her teeth in case she ingested calories fro the toothpaste

Concerned, she took her daughter to the doctors, where she was diagnosed with anorexia nervosa.

That year, Jade’s weight plummeted to 3st 12lbs and her BMI was a shocking 12.3.

Jade says: ‘My periods stopped and I was exhausted constantly. I had no muscle and had to use a wheelchair. My mum had to carry me to bed as I was so weak. 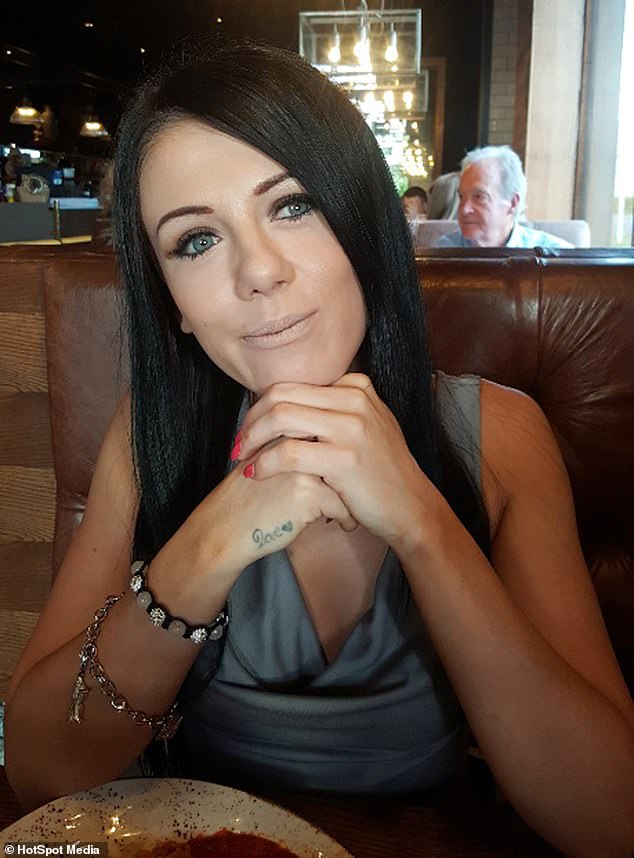 Jade is now a healthy 7st 7lbs and a size 8. She was spurred on to finally recover after falling pregnant with her first child

‘Doctors warned me that I wouldn’t be able to have children as I’d put my body through extreme starvation but I just didn’t care.

‘And they said I’d die within six months if I didn’t eat. My veins collapsed and I was severely dehydrated.

‘I even refused to brush my teeth as I believed toothpaste had calories. Mum was terrified and begged me to eat.’ 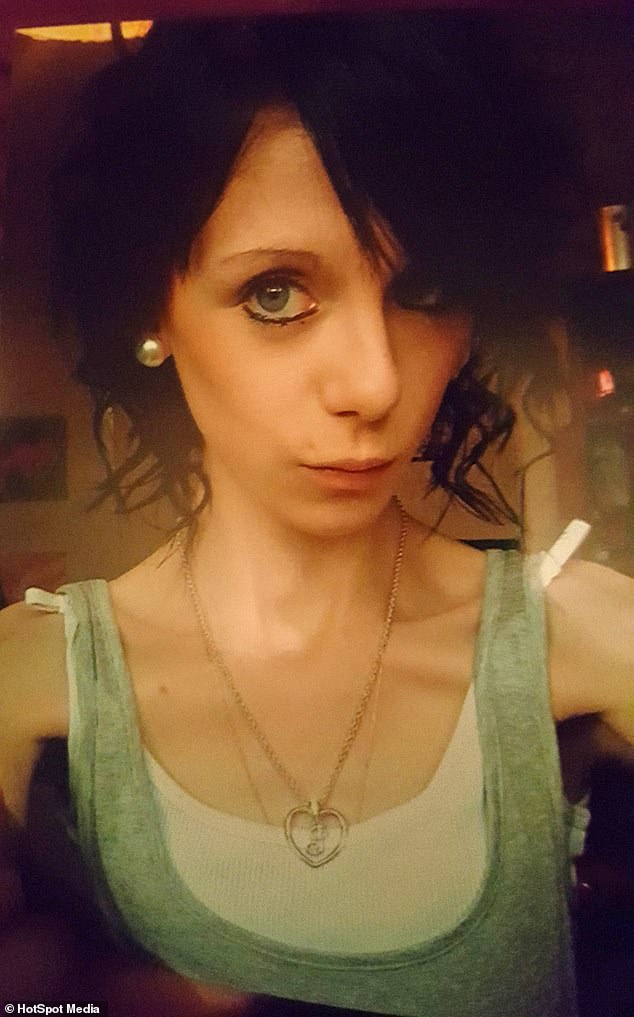 Jade pictured in 2010 when she weighed five stone. ‘My periods stopped and I was exhausted constantly. I had no muscle and had to use a wheelchair. My mum had to carry me to bed as I was so weak’

In 2010, Jade was admitted to Huntercombe Hospital, Edinburgh, after having a heart attack. Doctors told her mum that she wouldn’t survive the weekend.

Jade says: ‘Mum was distraught. Luckily I pulled through. Over the following weeks, I convinced everyone I was eating.

‘But one day when I was being weighed, sugar fell out of my pockets. ‘So I was admitted to an outpatient clinic in Edinburgh.

There, Jade was monitored to ensure she was putting on weight.

While she was in hospital, her beloved granddad, James Swan, then 69, wrote her daily letters encouraging her to love herself. 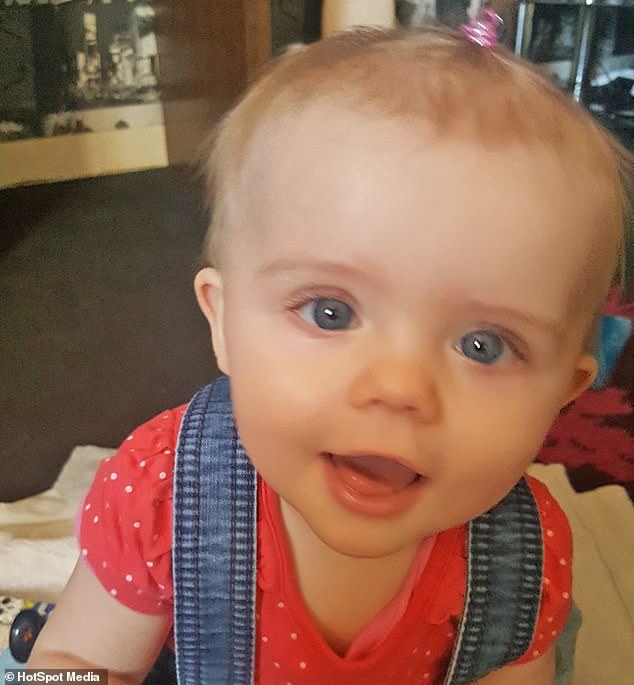 In June 2017, Isabella, now 18 months, was born healthily at 5lb 8oz. Jade is now determined to teach her daughter to grow up with body confidence

‘They kept me going. And I realised I needed to eat. So gradually, I upped my portions of food while therapy made me understand that food wasn’t the enemy.

‘I met my now fiancé Callum Scott, 26, a carpet fitter, through my big brother, and he kept me going too.

‘By the time I was 18, I was around 7st and a size 6 to 8. But my infertility played on my mind. My periods had returned but doctors weren’t sure if my body would take the impact of having children.

‘It felt like my anorexia was still controlling me.’ 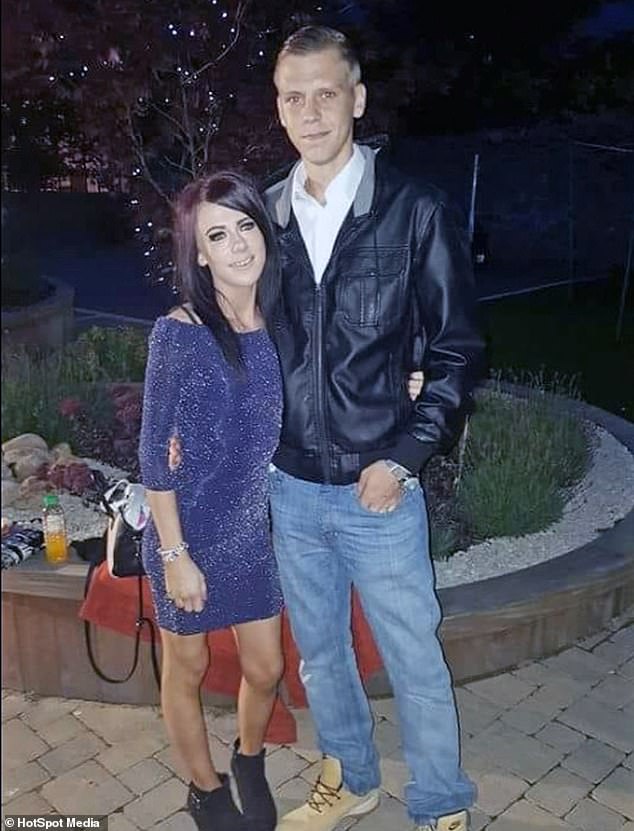 Jade met her fiance Callum Scott, 26, a carpet fitter, through her older brother, and he kept her going throughout her recovery

‘But, for four years, nothing happened. And my anorexia came back. My periods stopped and I started controlling food again. I dropped to 5st.’

But in October 2016, Jade was surprised to learn she was pregnant. ‘I couldn’t believe it. We were so excited, it was everything we’d longed for.

‘Because I was so slim, I had scans throughout my pregnancy to ensure my baby was growing properly. 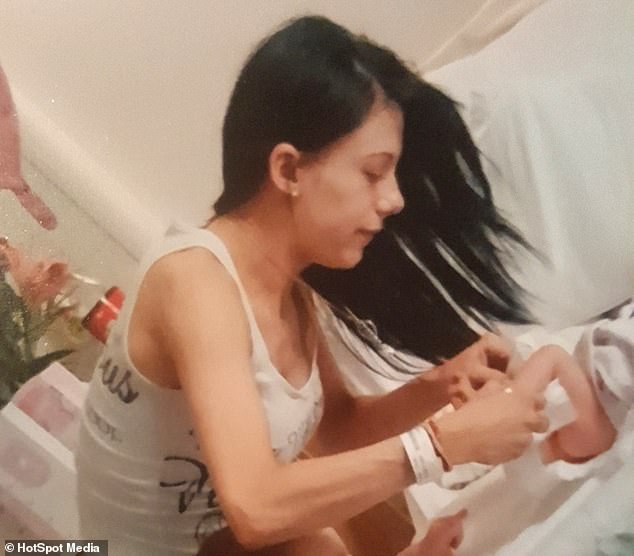 In October 2016, Jade was surprised to learn she was pregnant. She’s pictured after giving birth to daughter Isabella in June 2017

‘Having another life in my tummy spurred me on to eat properly. I knew I had to get better. I gained 2st 7lbs while I was pregnant but was still only a size 8 so I was still small.’

‘My baby girl saved me and I want to teach her how to love her body.’ 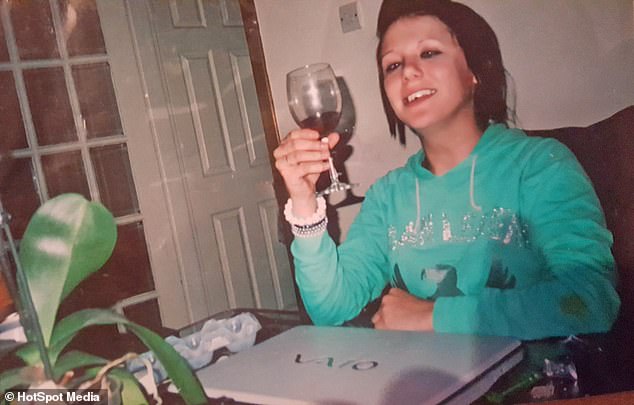 Jade Kyle aged 18, when she had recovered from anorexia for the first time. She relapsed again and only recovered when she fell pregnant with her first child six years later