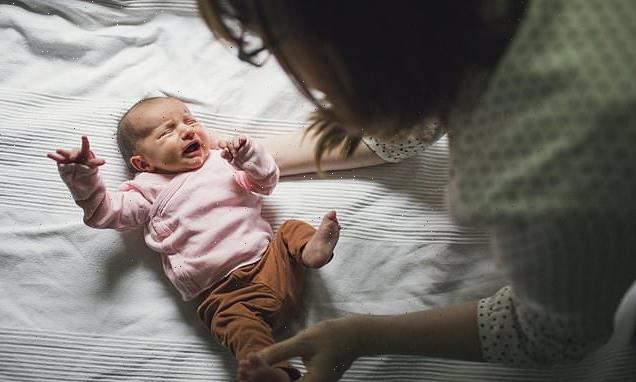 A parent has sparked a debate after admitting she puts her three-month-old baby to bed at midnight.

The unnamed woman took to the British parenting forum Mumsnet to canvas opinions on the controversial topic, claiming to be ‘baffled’ why people put their kids to bed earlier.

She revealed her baby goes to bed at midnight and as a result doesn’t wake until 8am and she said other parents ‘seem to be at their wits end’ because they are ‘forcing’ their kids to sleep when they don’t want to.

Commenters shared their thoughts with many saying babies need ‘a structured routine’ while others claimed most couples ‘want adult time in the evenings.’ 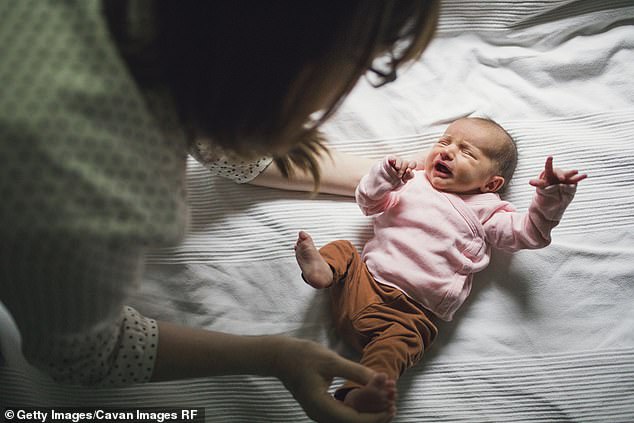 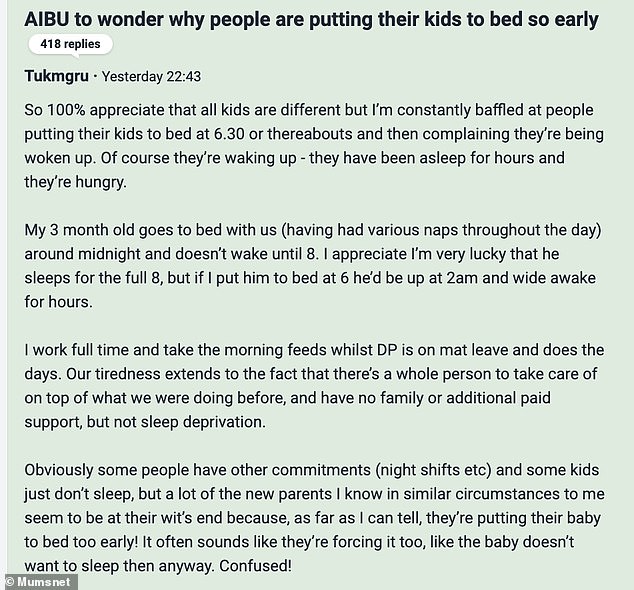 The unnamed woman took to the British parenting forum Mumsnet to canvas opinions on the controversial topic, claiming to be ‘baffled’ why people put their kids to bed earlier

More people suggested that the poster has just ‘lucked out with a dream newborn’ who sleeps for eight hours straight.

The original post explained: ‘So 100 per cent appreciate that all kids are different but I’m constantly baffled at people putting their kids to bed at 6.30 or thereabouts and then complaining they’re being woken up. Of course they’re waking up – they have been asleep for hours and they’re hungry.

‘My 3 month old goes to bed with us (having had various naps throughout the day) around midnight and doesn’t wake until 8. I appreciate I’m very lucky that he sleeps for the full 8, but if I put him to bed at 6 he’d be up at 2am and wide awake for hours.

‘I work full time and take the morning feeds whilst DP is on mat leave and does the days. Our tiredness extends to the fact that there’s a whole person to take care of on top of what we were doing before, and have no family or additional paid support, but not sleep deprivation.

‘Obviously some people have other commitments (night shifts etc) and some kids just don’t sleep, but a lot of the new parents I know in similar circumstances to me seem to be at their wit’s end because, as far as I can tell, they’re putting their baby to bed too early! It often sounds like they’re forcing it too, like the baby doesn’t want to sleep then anyway. Confused!’

Suggesting that the parent should be giving her little baby a structured routine while they are young, many rushed to the comments.

One person wrote: ‘It’s because from 3 months you are supposed to give them a structured routine they can follow as they get older. 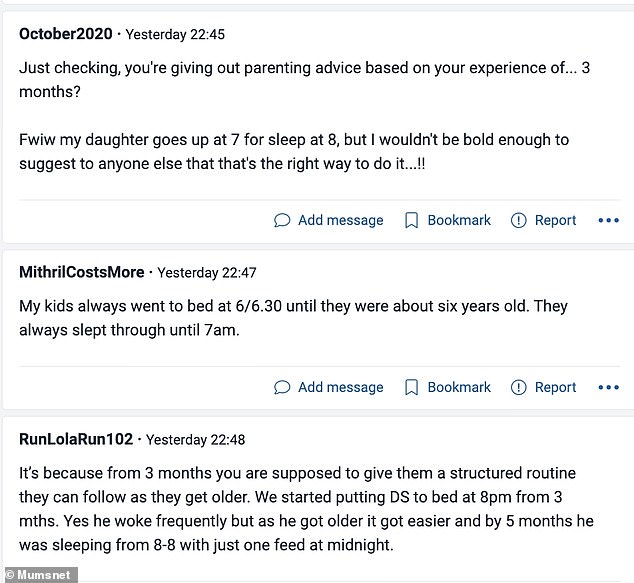 Reaction: Suggesting that the parent should be giving her little baby a structured routine while they are young, many rushed to the comments

‘We started putting DS to bed at 8pm from 3 moths. Yes he woke frequently but as he got older it got easier and by 5 months he was sleeping from 8-8 with just one feed at midnight.’

Another said: ‘So everything else aside, plenty of evidence that putting kids to bed earlier helps them sleep longer. The best quality sleep happens pre-midnight.’

While someone else wrote: ‘Seriously? Ok I have 4, now all adults/teens and bar no 1 (I learnt from my mistakes), they all slept 10 to 12 hours every night reliably without waking from 8 to 12 weeks of age so I do know what I’m talking about. .

‘I suggest you take some advice from more experienced parents. Your child needs to get into a routine of bath, story, milk, bed and being put down awake as soon as possible. I sound like my mother now but you’re making a rod for your own back!

‘And maybe try not to lecture everyone on the basis of 3 months experience.’

More people suggested that they put their tots down to sleep early because they want baby free time as a couple. 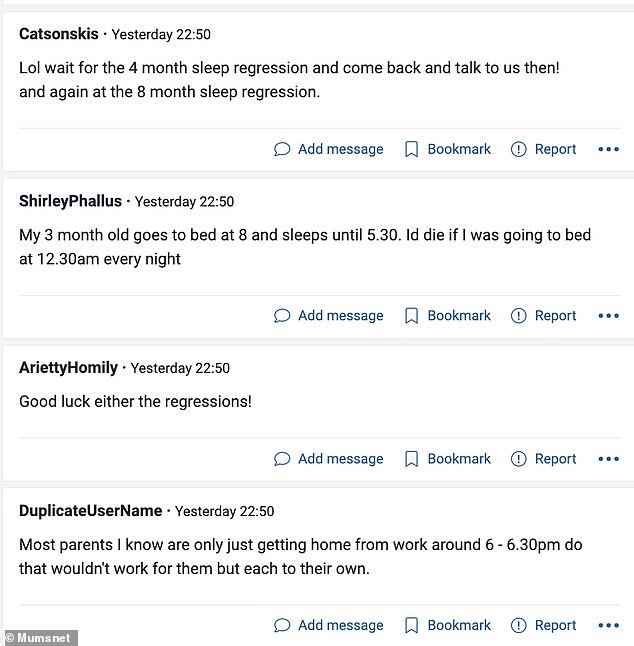 One person said: ‘Also because some couples actually like an evening with no children… even if they do wake after midnight. Horses for courses. We’ve always preferred to get ours to bed by 7pm.’

Another wrote: ‘Because people want adult time in the evenings, and also because it’s best to start a bedtime routine early so that it doesn’t become an issue when they get older.’

Others suggested that the woman shouldn’t ‘count her chickens’ too soon as her baby may not always sleep through the night.

One person said: ‘This made me laugh OP. Wait a few years before giving suggestions.

‘I put my kids to sleep at 8 now at 4 and 7 but at 3 months I remember big sleep disruptions and again at 9 months.’

Another said: ‘You’re 3 months in with a unicorn baby who sleeps 8 solid hours a night…I sincerely hope you don’t count all your chickens at this present moment because the odds of that still being the case in a few months is very very unlikely.

‘You’re experience differs from about 99 % of other parents experiences and you’d be mad to think you knew best just because you lucked out with a dream newborn. The other parents are doing what works for them, there’s no need to be so judgemental.’

Other parents seemed to agree with the original poster admitting if you put a baby to sleep later it will sleep in longer. 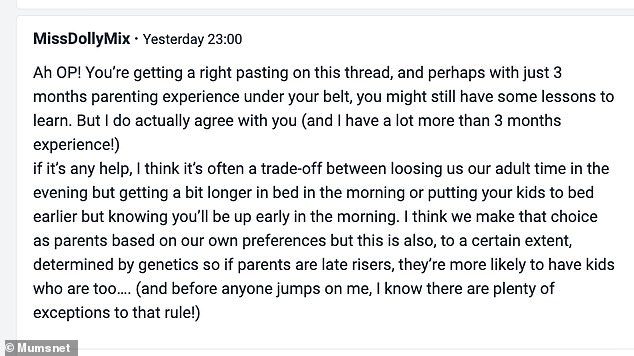 One person wrote: ‘I agree OP. My baby went to bed when we did and slept through until 8am. Only this past week do they now go to bed 7-7.30.

‘The parents at baby group putting their baby down to sleep at 6pm and then being perplexed they don’t stay there until 6.30am baffled me. If they just put their baby to bed a few hours later there would be more of a chance of them sleeping through I think.’

‘As someone who spent a lot of time in Europe as well as Asia, where kids are generally awake later with the adults, I’ve always found it odd. A woman I know puts her kids (including her now 8 year old) to bed at 6.30 and then constantly wonders why he’s up at 4.30am!’

While someone else wrote: ‘Ah OP! You’re getting a right pasting on this thread, and perhaps with just 3 months parenting experience under your belt, you might still have some lessons to learn. But I do actually agree with you (and I have a lot more than 3 months experience!)

‘If it’s any help, I think it’s often a trade-off between loosing us our adult time in the evening but getting a bit longer in bed in the morning or putting your kids to bed earlier but knowing you’ll be up early in the morning.

‘I think we make that choice as parents based on our own preferences but this is also, to a certain extent, determined by genetics so if parents are late risers, they’re more likely to have kids who are too…. (and before anyone jumps on me, I know there are plenty of exceptions to that rule!)’