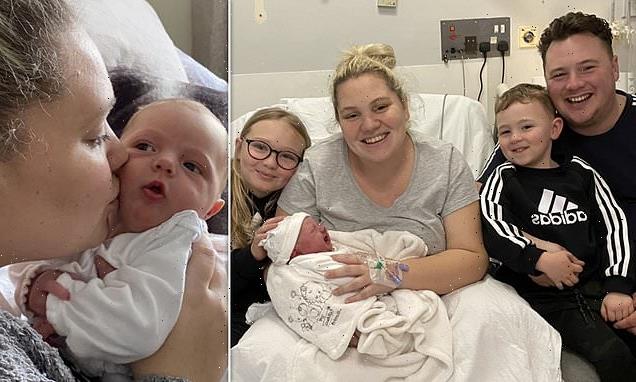 Father-of-three reveals how his wife, 32, whose ‘lifelong ambition was to be a mother’ collapsed and died just five weeks after giving birth because of a ‘preventable’ blood clot – and shares their only photograph as a family

A beloved mother tragically died five weeks after the birth of her youngest when she suddenly collapsed at home after suffering a ‘preventable’ blood clot – leaving the family with just one cherished picture together and calling for more awareness of the risks post-pregnancy.

‘Fun and loving’ assistant mental health nurse Samantha Crosbie, 32, was overjoyed when her beautiful baby girl, Betty Crosbie, was born on February 9 2020, after a long pregnancy dealing with pelvic pain, which meant she struggled to move around.

Only one picture was ever taken of Samantha with her three children, as her life was cruelly cut short on March 16 that year after just five precious weeks as a family of five.

She suddenly collapsed at her home in Red Hill, Surrey, while her husband, scaffolder Paul Crosbie, 38, and their eldest children, Stanley, then five, and Evelyn, then nine, were at the cinema. 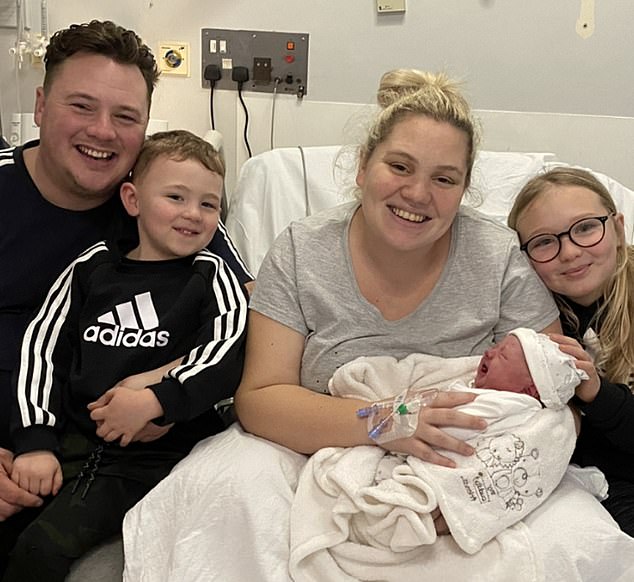 Only one picture was ever taken of Samantha with her three children Evelyn, nine, Stanley, five, newborn Betty and husband Paul, 38, before her sudden death just five weeks after giving birth

As she lost consciousness, Samantha had been on the phone to her mother, Jane Parker, 62, who began to frantically shout her daughter’s name down the phone before calling for an ambulance, which rushed her to the hospital.

Devastatingly, Samantha died the next day, after tests revealed she had suffered a Pulmonary Embolism (PE) – a blocked blood vessel in the lungs and heart, which occurs when a blood clot usually from the veins of the legs breaks off and travels to the lungs – something which pregnant women are at an increased risk of, though rare.

While still devastated by her loss, Samantha’s mother, Jane, who lives in Walton-on-the-Hill, Surrey, hopes her daughter’s experience can help educate other women, saying: ‘If Samantha had been more aware of the risks, she might still be here today.

‘I want her children to know that we did everything we could to help make a difference. 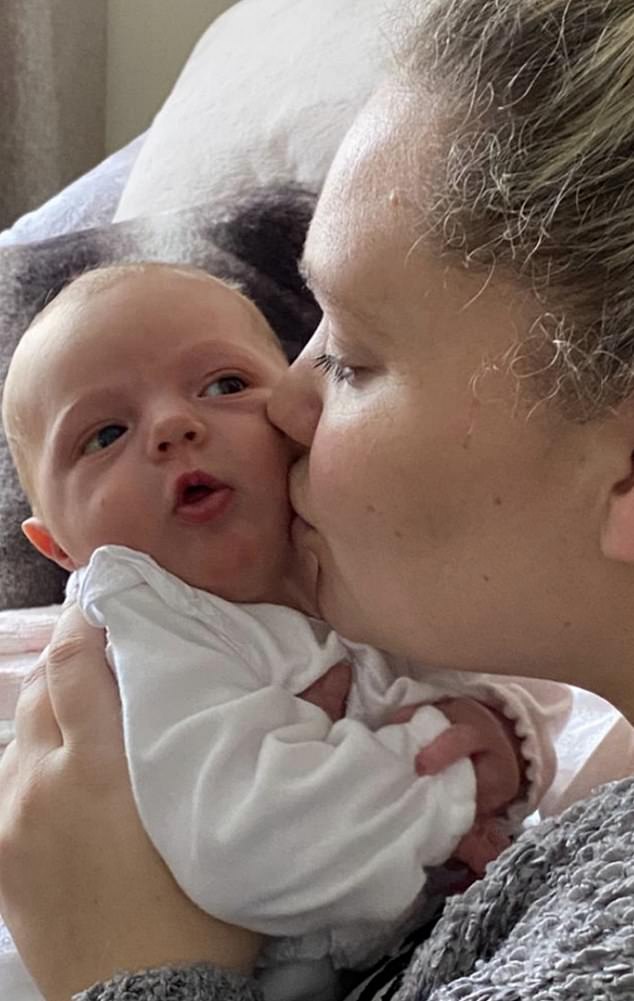 Samantha’s mother Jane Parker, 62, said it was her daughter’s ‘lifelong ambition to be a mother’. Pictured: Samantha with Betty

‘I want them to know that her life wasn’t wasted.’

Above everything, Jane said, Samantha always wanted to have children.

‘It was her lifelong ambition to be a mother,’ Jane said. ‘She loved them and did everything with them.

‘She would always be doing fancy dress – dressing up like prisoners or The Simpsons for fun at home or dressing up the buggy as a bumble bee for a village fete competition.

What is a pulmonary embolism?

A pulmonary embolism is a blocked blood vessel in the lungs, which can be life-threatening if not treated quickly.

Sufferers will have severe difficulty breathing, their heart will be beating very fast or they will have passed out.

Patients at hospital are normally given an injection of anticoagulant medicine to stop blood clots getting bigger and prevent new clots forming.

If tests confirm the patient has a pulmonary embolism, they will have at lesat five days of anticoagulant injections – and will need to take the tablets for at least three months.

People who suffer a pulmonary embolism are normally expected to make a full recovery if it is spotted and treated early.

‘She always had these fun, clever ideas, which they loved.’

It was early 2019 when Samantha and Paul found out they were expecting another baby, Betty, due in February 2020.

While the couple were delighted, Samantha struggled with the pregnancy – especially with pelvic girdle pain – which can cause pain walking, climbing stairs and turning over in bed.

Jane said: ‘She had girdle pain with her other pregnancies but with this one, it kicked in straight away and she found it really difficult to get about.

‘The pain became so bad, she ended up staying home most of the time.’

On February 9, little Betty was born and the family were overjoyed.

Jane said: ‘Samantha was so happy – she not only had her baby girl, but the hip pain had gone away too.’

After an ear infection shortly after giving birth, Samantha seemed to be settling back into her routine.

Jane said: ‘I called Samantha in the morning, while she was in the shopping centre with Betty, looking for what I now know was my Mother’s Day present.

‘She was saying that the wheel of her buggy was stuck and then she couldn’t find her parking ticket.’

It was shortly after Samantha arrived home that it became clear something was very wrong.

Jane said: ‘I was still on the phone to her saying we would come over later to fix the buggy and then suddenly she went all funny, speaking gibberish, and then it went silent.

‘I was calling and calling her and she said ‘I think I’ve fainted’ but then she went again.’

Desperately shouting Samantha’s name, Jane called for an ambulance, while frantically trying to get hold of Paul – who was in the cinema with their two other children.

Rushed to hospital, scans revealed that Samantha had suffered a massive blood clot in the lungs and heart.

Jane said: ‘It was devastating. Everything changed that day. It broke my heart.’

After a painful two years through the pandemic, on July 16 this year, Jane wanted to do something in Samantha’s memory and organised a memorial festival in a village in Walton-on-the-Hill – including Evelyn, now 12, Stanley, now seven, and two-year-old Betty.

She said: ‘I wanted to have a fun day to celebrate her life and not just get lost in the two years before.

‘Everyone had wristbands with Samantha’s name on and the kids let balloons off for her and everyone had a can of diet coke, which was her favourite.

‘We had ten minutes of Spice Girls, which she loved, and we played the sound of Samantha laughing over the speakers too, which was really emotional.’

But Jane also hopes to keep Samantha’s memory alive by raising awareness of blood clots and the charity Thrombosis UK.

She said: ‘Nowadays, you don’t have the same midwife the whole time, you have lots of different ones, so they might not know everything that is happening.

‘Samantha not being able to move around for nine months, not doing very much, was a sign that could have been highlighted.

‘If she had understood that she would be more at risk of a blood clot, I am sure it would have made a difference.

‘From the moment a woman is pregnant to the end, we should be constantly talking about these things and making sure women know about them and are aware of them – because it could save a life.’

Paul, who now lives with their three children, his new fiancee and her two children in Purley, Surrey, also hopes Samantha’s story will help other women.

He said: ‘Our whole life changed the moment Sam died.

‘It breaks my heart knowing Betty is not going to know her mum.

‘Sam was a one-of-a-kind. She was such a fun, happy-go-lucky person who always put us and the kids first.

‘Family meant everything to her.

‘We can’t change what happened but if we can make people aware of it or know what to look for and save one person, then it will help save lives.’

Jane Dickson, chief of nursing and midwifery at Surrey and Sussex Healthcare NHS Trust, said: ‘I extend my heartfelt condolences to Samantha’s family. Raising awareness of the risks of pulmonary embolism is an important part of care during pregnancy.

‘At the Trust, we provide detailed information leaflets for patients, document risk assessments in their notes and where appropriate, share video guidance for administering medication after they leave our care.’

Professor Beverley Hunt, one of the leading experts on thrombosis and acquired bleeding disorders, said: ‘Pulmonary embolism (PE) occurs when a blood clot, usually from the veins of the legs, also known as deep vein thrombosis (DVT), breaks off and travels to the lungs.

‘Pregnant women are at increased risk of PE, and although rare, is a leading cause of death in pregnancy and postpartum.’

Professor Hunt continued: ‘This is because during pregnancy, a woman’s blood gets more sticky, possibly this happens to lessen blood loss during delivery. This stickiness continues after delivery and settles by about six weeks after giving birth.

‘Pregnant women also experience less blood flow in the leg veins because the blood vessels around the pelvis are pressed upon by the growing uterus and the veins enlarge during pregnancy. We also know immobility is a major risk factor for clots’

‘If prevention with small doses of heparin are used in women at high risk then the risk of blood clots can be reduced, so education and accurate assessment of risk can result in substantial benefits.

‘Tragically for Samantha, this was not the case. While this may not be classed as a ‘common’ complication of pregnancy, cases like Samantha’s highlight the need for education about the risk of blood clotting to women who are pregnant or have just given birth.’