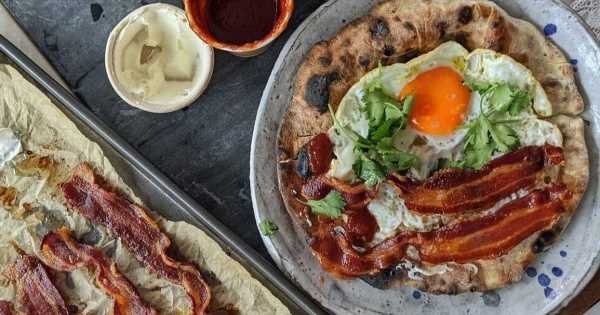 Marks and Spencer has just come out of a food battle with Aldi after suing the supermarket for copying its famous Colin the Caterpillar cake.

But, just as the flames have died down it looks like M&S might be getting into another dispute.

After sharing a snap on Instagram this week, the supermarket has come under fire by Brits for its contents.

And, many shoppers said that Marks and Spencer had “copied” Dishoom’s bacon naan.

Dishoom is a popular chain of Indian restaurants with branches in London, Edinburgh, Manchester and Birmingham.

It serves dishes which pay a homage to Irani cafes and the street food of Mumbai.

And, while the restaurant is known to serve delicious small plates, grilled foods, vegan dishes and tasty biryani it’s beloved for its tasty breakfast menu.

Including, their famous bacon naan roll with egg and chilli.

Fans were then fuming when they spotted the M&S version of the dish, reports the Express.

The supermarket captioned the snap on Instagram: “Umm… did someone say chilli egg and bacon naan?

“Swipe for the recipe.”

Chef Chris Barber then demonstrated in a video how he made the dish and noted: “I’m brunching out today with my M&S smoky bacon and egg naan.”

Shoppers however weren’t happy with the situation – and some were even fuming.

“Wow M&S, didn’t like it when Aldi copied you, but then completely ripping off Dishoom’s recipe and make at home kit,” raged another.

They said: “Inspired by the wonderful dish @dishoom.”

And, after Dishoom replied to the supermarket on social media they recommended customers head over to Dishoom.

A Marks and Spencer spokesperson said: “You may have seen some posts from us and Dishoom.

“We wanted to say we think you’re great at what you do and want to stay friends.

“We’re asking all of our followers to support the incredible work Dishoom does by booking a table at one of their restaurants or buying their delicious bacon naan kit.

“We highly respect the incredible work Dishoom does to support children’s meal charities, and we’ll be reaching out to Magic Breakfast.”

On Twitter, Dishoom said: “Dearest friends, it may not have escaped some people’s notice that a rather famous retailer has, in the past days, been peddling the recipe for a dish that is especially close to our hearts.

“In fairness to @marksandspencer, they did, after much prompting from our kind patrons (for which we’re truly grateful) credit Dishoom as their inspiration. We were happy to have a little fun in response (and we got to eat a fair few Percy Pigs in the process).

“They say imitation is the sincerest form of flattery, and we were, of course, a little taken aback to have inspired such an esteemed establishment.”

The restaurant group noted: “You see, @marksandspencer, this isn’t just a bacon naan roll, this is the Dishoom Bacon Naan Roll, and it means a great deal more to us than you know.”

Daily Star has contacted Marks and Spencer for further comment.