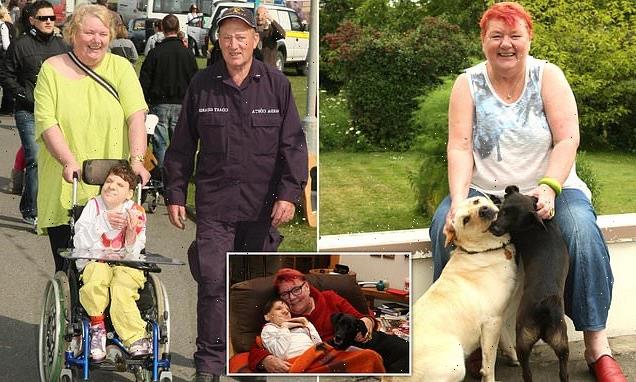 ‘She’s not special, she’s damaged goods’: Mother who cared full-time for her disabled daughter who died at 36 admits it left her ‘bored out of her tree’ and feeling ‘guilty’ for wanting her life back despite the ‘unconditional love’

A mother who was a full-time carer for her severely disabled daughter until she died aged 36 has admitted it left her ‘bored out of her tree’ and racked with guilt for wanting her life back.

Johanne Powell, of County Wexford, Ireland, had one child with husband Alan – Siobhan, who was born with an extremely rare chromosomal disorder.

Siobhan sadly passed away on August 4 last year, and last week Johanne shared an emotional blog post on what would have been her 37th birthday.

Johanne has dedicated her life to lobbying about disability and carer issues and previously opened up to the Irish Times about the harsh reality and challenges of having a child with such complex needs.

‘I’m not doing this job by choice,’ she told the publication in 2016. ‘I’m doing this job because I have to do it, because there is no alternative. I don’t want to do it any more. I’m bored. I’m bored out of my tree doing the same thing day in, day out, with no changes. 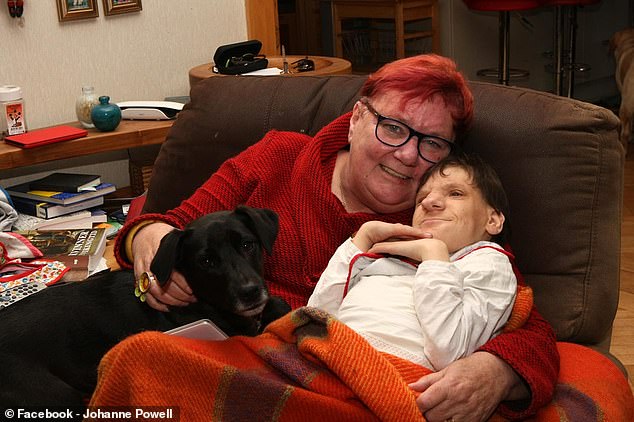 Johanne Powell, of County Wexford, Ireland, had one child with husband Alan – Siobhan, who was born with an extremely rare chromosomal disorder (pictured together)

‘I swear to God I could walk into a supermarket and rob the place blind, because once you have a child in a wheelchair, by definition you’re a good person. It doesn’t matter what you really are.’

She went on: ‘Sorry. I’m going to be very straight about it: she’s not special. She’s damaged goods. I wanted the child that I thought I was going to have. The one that was going to have two children by now, and have finished university studies, and be having a life for herself, in a home where I could visit and babysit my grandchildren. I wanted to have that child.’

When Siobhan was born with a rare genetic disorder branded ‘ring chromosome 8’ and weighing just 1.65kg, she was given a prognosis of less than a year, leaving her parents devastated. Johanne told how she ‘went to pieces’ and lost a month of her life to constant tears.

Siobhan’s 37 years on Earth were, according to Johanne’s blog post, full of ‘heartache and laughter, of hardship and fun, of great new friendships and terrible loneliness’.

‘Mainly it has been 37 years of love, unconditional, uncomplicated love,’ she wrote. ‘She will be part of us forever, and we will love her forever.’

For the first six months, Siobhan was tube fed before she was moved onto liquids, which remained her diet for the rest of her life. 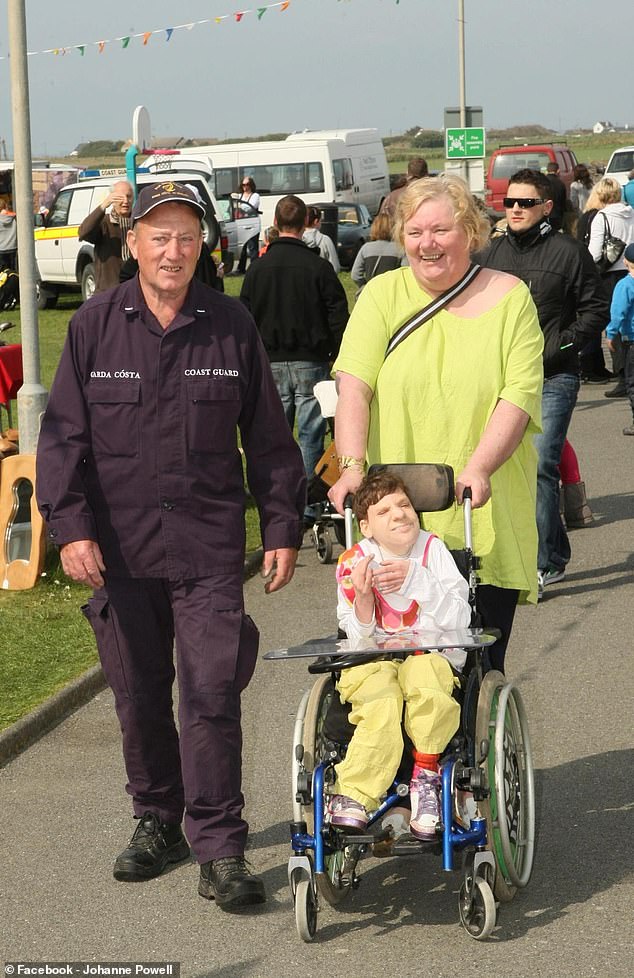 Siobhan’s 37 years on Earth were, according to Johanne’s blog post, full of ‘heartache and laughter, of hardship and fun, of great new friendships and terrible loneliness’ (pictured together with Alan)

Both Johanne and Alan, who met while working on a Norwegian oil tanker, had planned to go back to their jobs, but after taking nine months off Alan became the sole breadwinner and returned to sea for three months at a time.

Thankfully Alan’s mother Lettie was ‘unbelievable’ with Siobhan and would look after her for an hour every afternoon to give Johanne some respite.

The family considered moving back to Johanne’s native Norway, where they would likely have received better public healthcare support, but eventually decided against it because Alan didn’t want to leave and Siobhan had become ‘part of the village’.

In her blog post, Johanne told how there was ‘no access’ to any sort of therapy or education for Siobhan, and they ‘had to fight for everything’.

From when she was a year old, she attended the Central Remedial Clinic in Clontarf, which is where the couple received most of their professional help, including speech therapists, physiotherapists, a seating clinic to get her wheelchair and a psychologist.

Johanne claimed they had ‘very little input’ from the Health Service Executive (HSE – the publicly funded healthcare system in the Republic of Ireland) while Siobhan was growing up and would see the public health nurse ‘maybe every second year’. 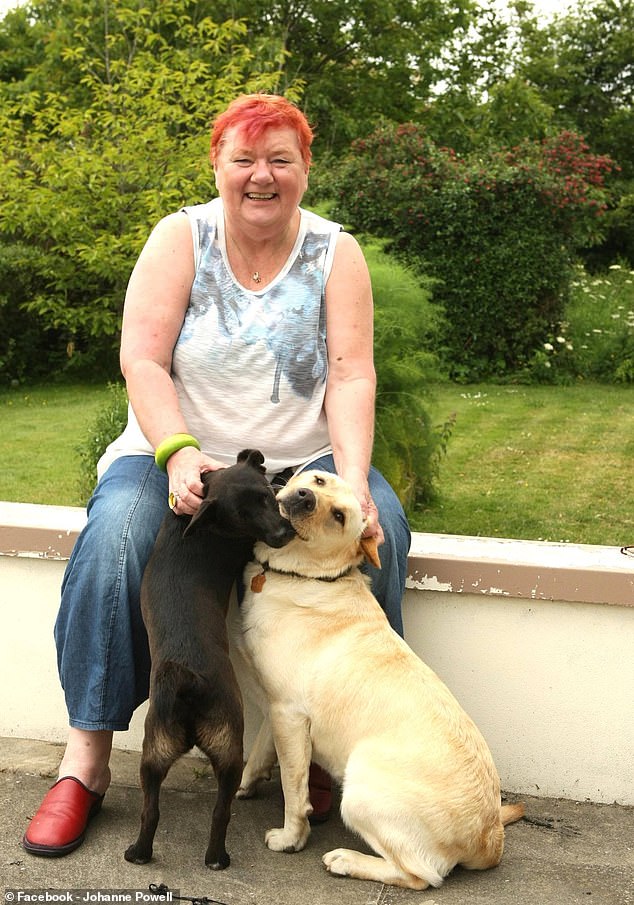 In her blog post, Johanne told how there was ‘no access’ to any sort of therapy or education for Siobhan, and they ‘had to fight for everything’

‘We never saw a social worker, in later years she would see physiotherapists, occasionally a speech therapist and I think twice a dietician in [HSE-funded] Ard Aoibhinn [a not for profit charity which provides day services for people with an intellectual disability and special needs],’ she wrote.

What is Ring Chromosome 8 syndrome?

Ring Chromosome 8 is caused when the ends of a chromosome fuse together to form a ring.

This rare chromosomal abonrmality can affects growth and mental abilities to varying degrees, ranging from minor to severe depending on the individual.

Physical symptoms include abnormality of the palate, an upturned nasal tip, prominent eye folds and abnormal positioning of the fingers, and hydronephrosis – where one or both kidneys become stretched due to a build up of urine.

The condition can occur spontaneously or be caused by genetic damage, for instance from radiation. It is incurable and life expectancy depends on the severity of symptoms.

‘It is known today that early intervention is vital for children with disabilities, and it is shameful to see how little have changed in the last 30-odd years.’

She added that Siobhan was only entitled to an education from the age of 13, but ‘loved it’ when she did.

Johanne said her daughter loved going away on her own for respite and firmly believes it is ‘vital’ for people with disabilities to be able to build a life independent of their parents, ‘just like any other young adult’.

The Powells only had three weeks of respite a year, and were full-time carers every weekend and from when Siobhan arrived home from Ard Aoibhinn at 3pm each day.

Johanne admitted she and Alan could never be spontaneous and she didn’t even know what her local town looked like after 5pm. She maybe went to the cinema or theatre once or twice a year.

They put their names down for long-term residential care for Siobhan in 2013, believing she was ‘entitled to a life away from them’ with regular visits, but had no success.

The couple were also desperate to get their own lives back, with Johanne observing there is ‘no such thing as retiring for carers unless you die’.

‘It’s hard to say these things, because you do feel guilty about saying you don’t want your daughter at home. It’s not that we don’t want her at home, but I don’t think I can cope much longer,’ she told the Irish Times.

When the pandemic hit it got ‘very difficult’ for the Powells as all of Siobhan’s services stopped. ‘For people with disabilities their services are their only contact with other people with similar abilities and interests,’ Johanne wrote in her blog.

‘Lucky for us Ard Aoibhinn stayed open and we made arrangements for her to attend two or three days a week. Unfortunately the usual transport arrangements were also cancelled, so we drove her to Wexford and picked her up in the evening.

‘She loved it, but we had started to notice that Siobhan was getting very tired, and there was times when we decided she was not up to going in.’

Towards the end of July the couple took her to hospital where doctors discovered her last kidney had stopped working. Alan and Johanne took their daughter home to share their last few days together as a family before she passed away peacefully.

‘We were lucky, it was between the lockdowns, so family from Norway and the UK was able to come and share with us this difficult time,’ she wrote. ‘We had a beautiful simple funeral for a maybe not quite as simple girl.’

Johanne is keen that society stops seeing carers as ‘wonderful and superhuman’ because doing so fails to take into account the fact they have needs of their own.

‘The more society thinks we are all these things, the more we get shoved away out of conversation or debate, because we’re supposed to be special, and therefore supposed to be able to cope with full-time caring,’ she said.

Johanne explained she wanted to speak out about how she felt as a carer and start a conversation to help younger parents behind her who may be thinking they’re wrong for feeling resentful or like they’re struggling.