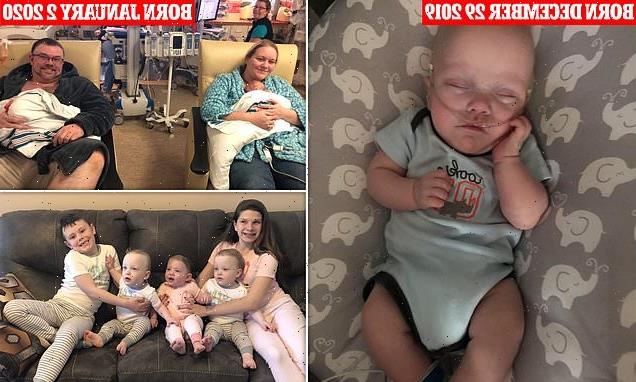 A set of triplets have been born in different decades after their mum gave birth to them five days apart.

Kaylie DeShane, 33, from New York, gave birth to her triplets in different decades after delivering her first baby on December 28 2019 and then giving birth to the remaining two triplets five days later on January 2, 2020.

Kaylie currently holds the world record for the longest interval between the birth of triplets after beating the previous record of two days.

Despite the staggering low odds of survival – with one triplet only having nine per cent chance of making it after being born at 22 weeks – the triplets, Rowan, Declan and Cian all survived, and are now 17-months-old. 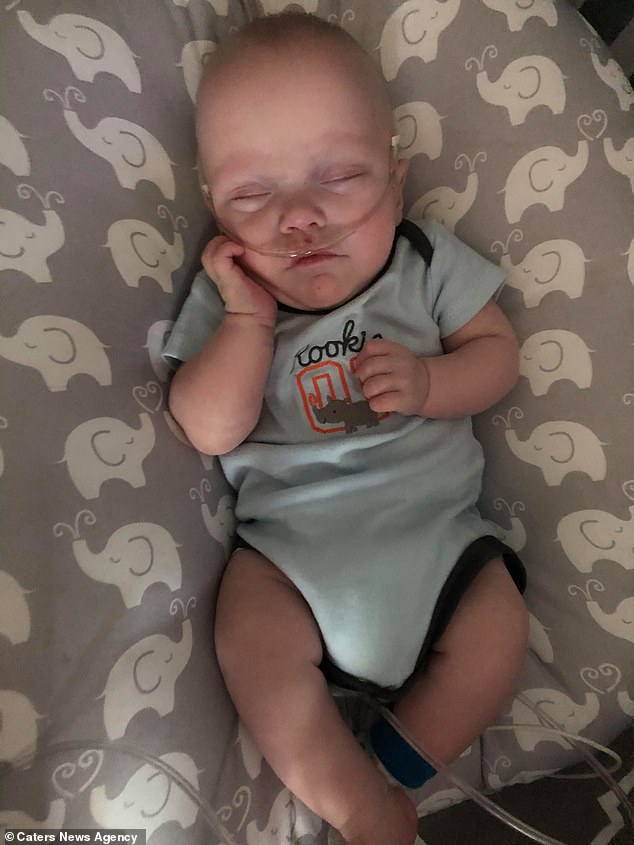 Kaylie DeShane, 33, from New York, gave birth to her triplets in different decades after delivering her first baby, Cian, pictured, on December 28 2019 and then giving birth to the remaining two triplets five days later on January 2, 2020

The remaining two triplets didn’t follow the first baby and due how premature the birth was, medics were keen to keep the other babies inside of Kaylie for as long as possible.

Five days later, Kaylie went into labor and delivered her other two babies on 2 January 2020, meaning that her triplets were born in different decades.

Kaylie said: ‘After trying to fall pregnant four years, with my husband, Brandon, 35, we decided to try IVF. 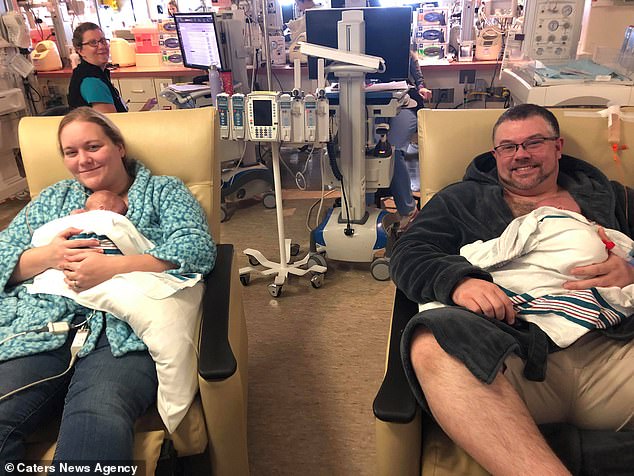 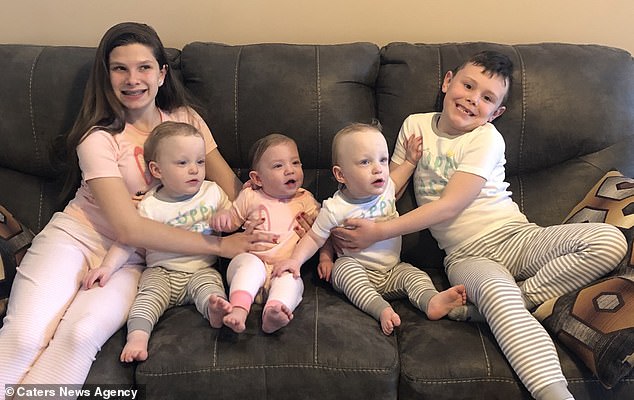 The triplets now with their step-sister Naveah and their adopted brother Holden, at home. The triplets spent four months in the Neonatal Intensive Care Unit (NICU)

‘We already have an adopted son, Holden, seven, and a step-daughter, Naveah, 12, but we wanted a sibling for them.

‘We decided to place two embryos rather than just one because we thought we would have a better chance of having a baby.

‘So we really never expected that we would actually end up having triplets. 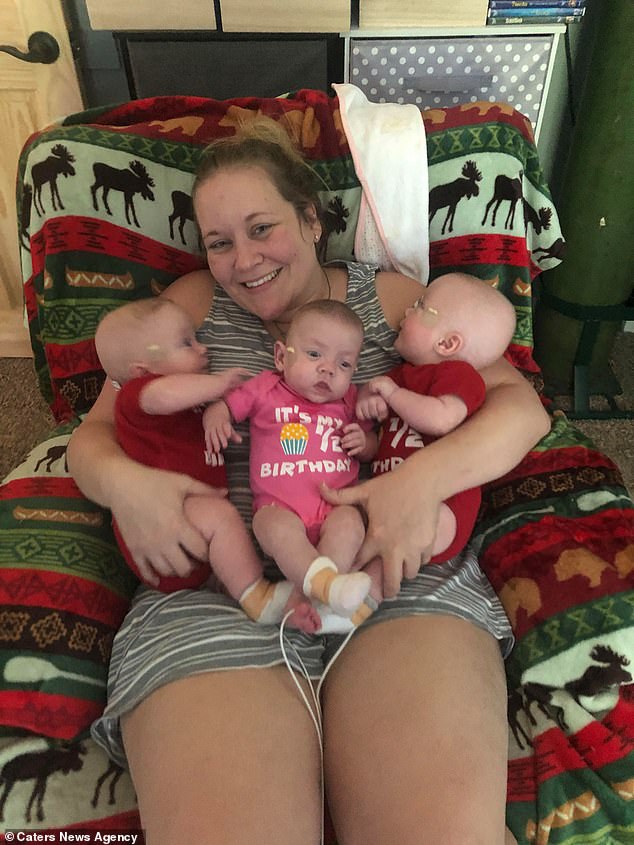 Kaylie with the triplets after they were released from the hospital, but were still on oxygen to help their lungs 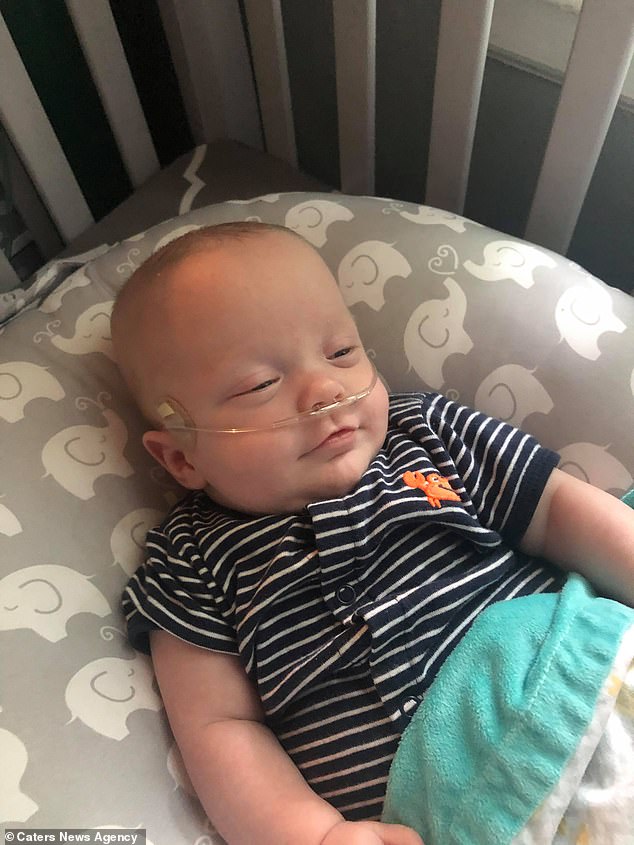 Declan, pictured, was the first baby to make it out of the NICU on April 17, before Kaylie’s actual due date of April 26 2020 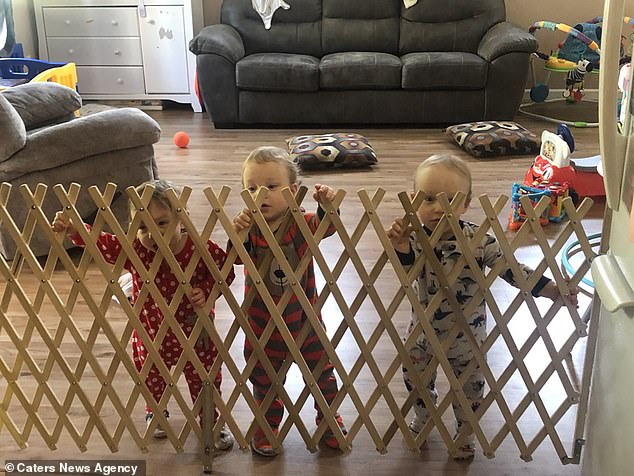 The triplets standing in their play pen at home. With Cian born at 22 weeks, it was a scary time for Kaylie and Brandon

During her pregnancy, Kaylie was told that it was high risk because there were three babies, and she was advised to terminate the two identical babies of the triplets to give one baby a better chance of surviving.

She decided against this and continued with her triplet pregnancy.

Kaylie, an addictions counselor, said: ‘At 16 weeks it was discovered that my cervix was failing and that I would need emergency surgery to stitch it up because I was 1 to 2cm dilated.

‘It was absolutely terrifying because we thought we might lose Cian. He was the baby that was closest to the exit and there is a risk that the surgery can rupture the sac. 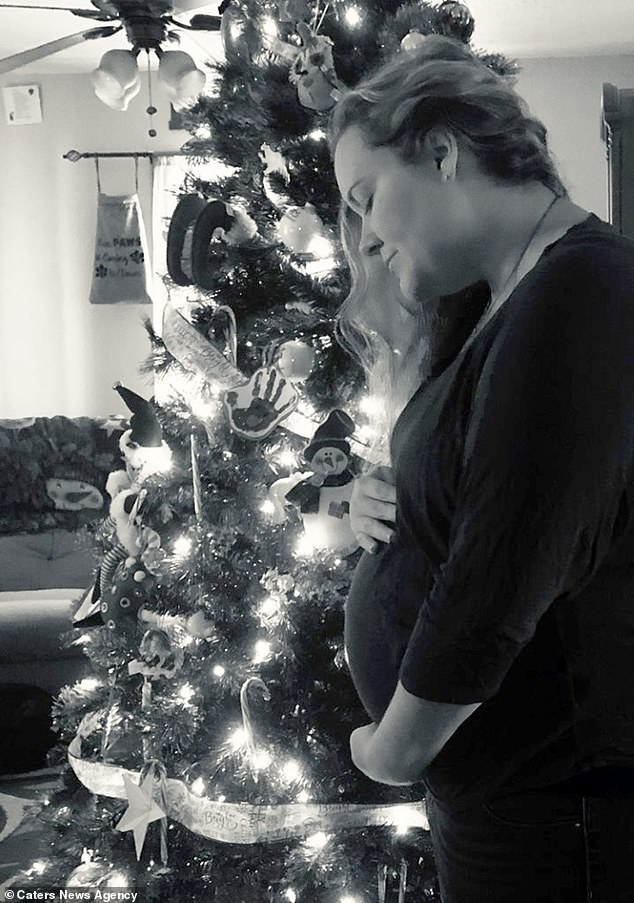 Pregnant Kaylie around Christmas time 2019, before she gave birth. The couple had been trying for a baby and turned to IVF to help 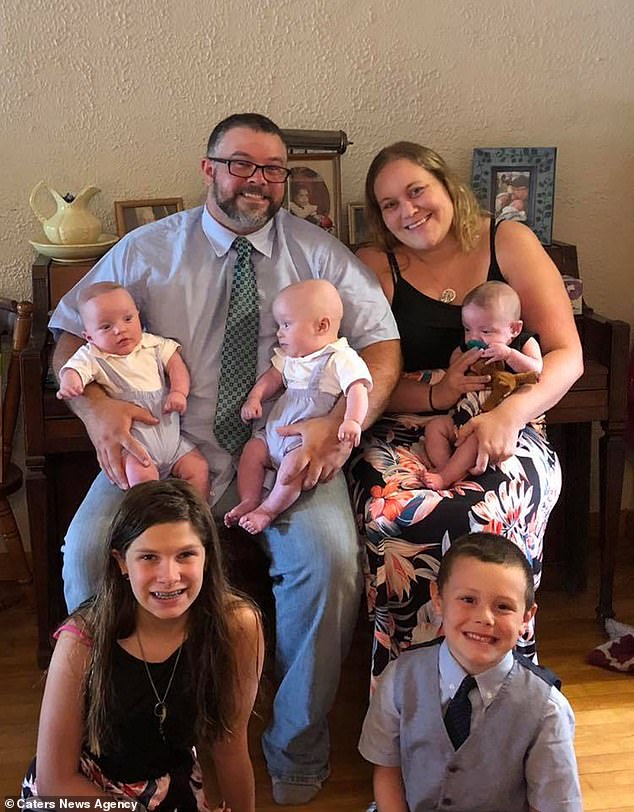 Brandon and Kaylie holding the triplets at home with Naveah, who is 11 and Holden, who is seven

‘But luckily that didn’t happen and the surgery worked. For the next few weeks of the pregnancy, I had to focus on resting in bed to keep my babies inside of me.

‘At 22 weeks and five days, I went for an anatomy scan where I was told everything was fine.

“However, later that evening my water broke.

‘I was so scared because I was only 22 weeks pregnant, I had no idea if the babies would live or survive if they were born at this point in the pregnancy.’

After going back to the hospital and staying overnight, Kaylie says that she woke up the next morning with some heavy bleeding and that the next thing she knew, Cian was coming out. 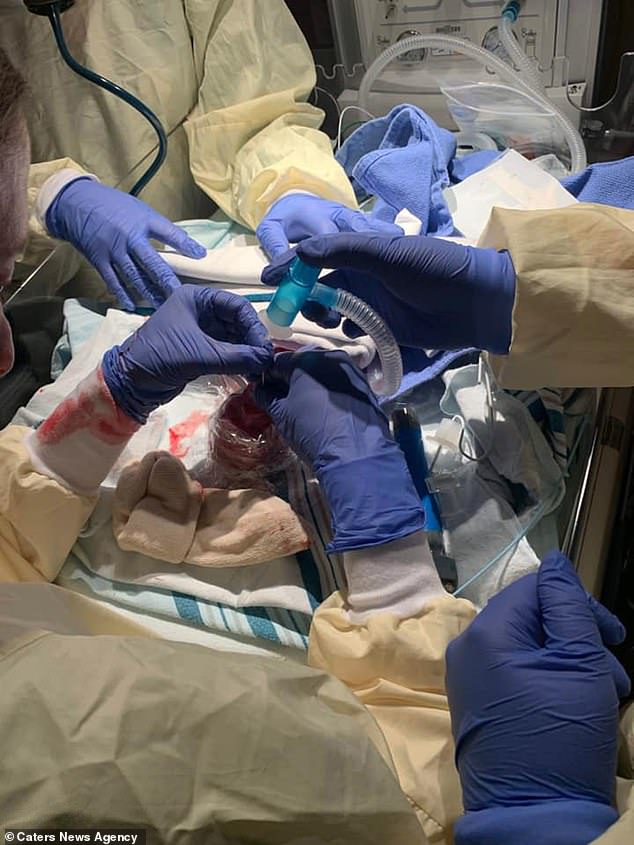 One of the triplets in the NICU after their premature birth. When he was born, first triplet Cian only had nine chance of survival 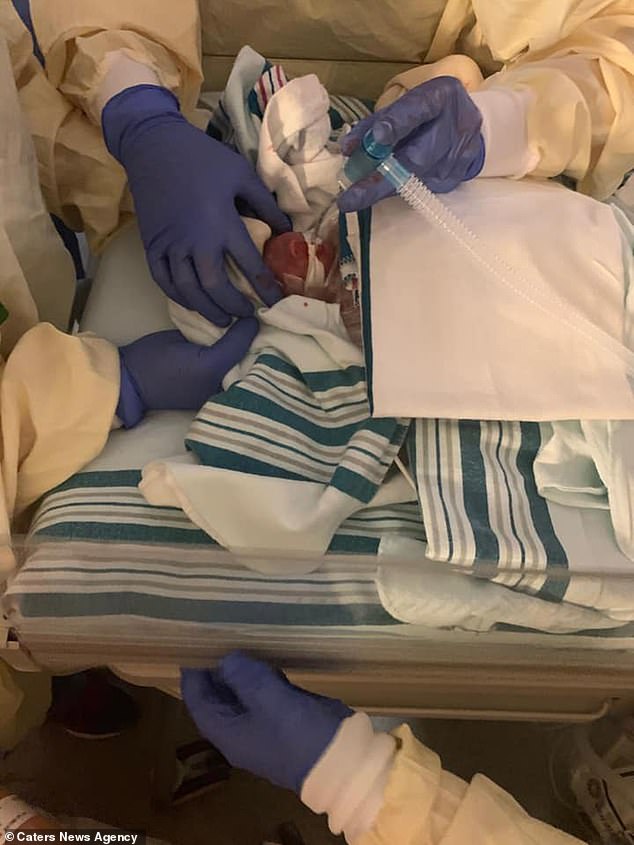 Another one of the triplets being treated in the NICU. Declan weighed 1lbs 7oz and Rowan was 1lbs 1oz when they were born. Cian weighed less than 1lbs

She recalls doctors shouting and not knowing if the baby was alive or not because they couldn’t get reading on him.

Kaylie added: ‘After they pulled him out they eventually managed to stabilize him.

‘I saw him for a split second before he was taken over to the NICU. He was so small, I couldn’t believe it. He weighed less than 1lb.

‘I lay there expecting the next two babies to come but nothing happened. I was kind of like, “Now what?”.

‘I kept asking where the other two babies are and the doctors said we don’t want them to come out if we can help it.

‘Nothing was happening and the doctors explained to me that they wanted to hold off delivering the next two babies for as long as possible because it was so early in the pregnancy. 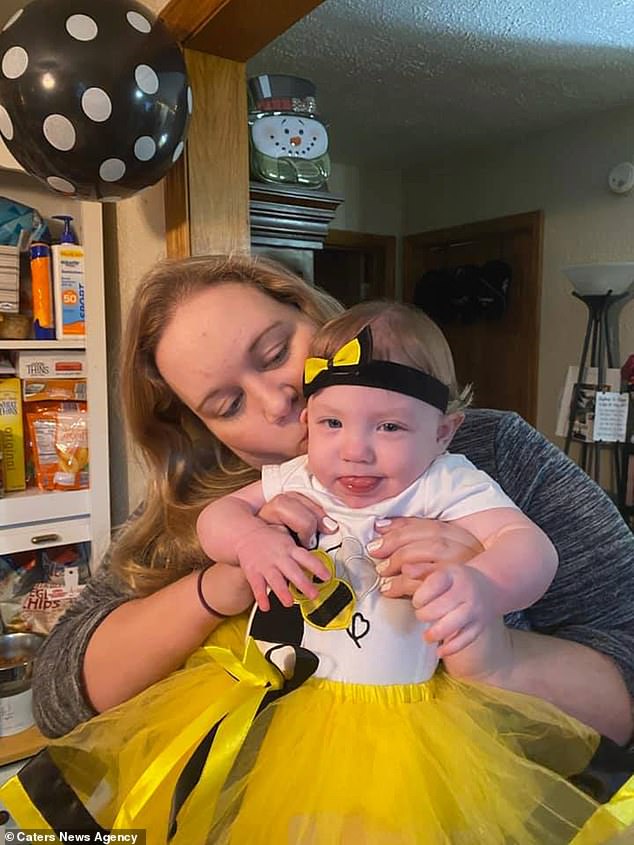 Rowan dressed as a bee in Kaylie’s arms. The triplets are now home and healthy, and Kaylie said she was proud of what they had overcome 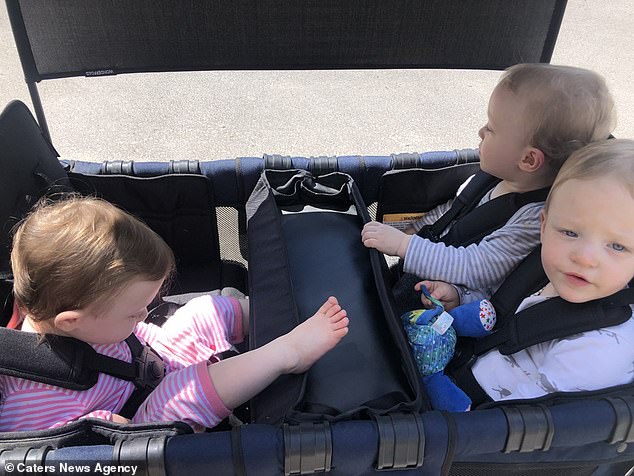 The babies in their pram for a family day out. Declan came home on April 17 2020, Rowan followed on April 30 and Cian made it home on May 4

‘The hospital had never had any 22 week babies that survived and Cian only had a nine per cent chance of making it.’

After spending five days in labor at 10 cm dilated, the next two babies, a boy named Declan and a girl named Rowan, were born. Declan weighed 1lbs 7oz and Rowan was 1lbs 1oz.

Kaylie says that as soon as she pushed the next two babies out, they were stabilized and breathing tubes were put in place and they were taken off to the NICU too.

She said: ‘The babies spent a total of four months in the NICU. It was touch and go at times for each of them.

‘But we didn’t lose faith and we kept fighting for our babies.

‘Declan was the first baby to come home with us on April 17. He made it home before their actual due date of April 26. 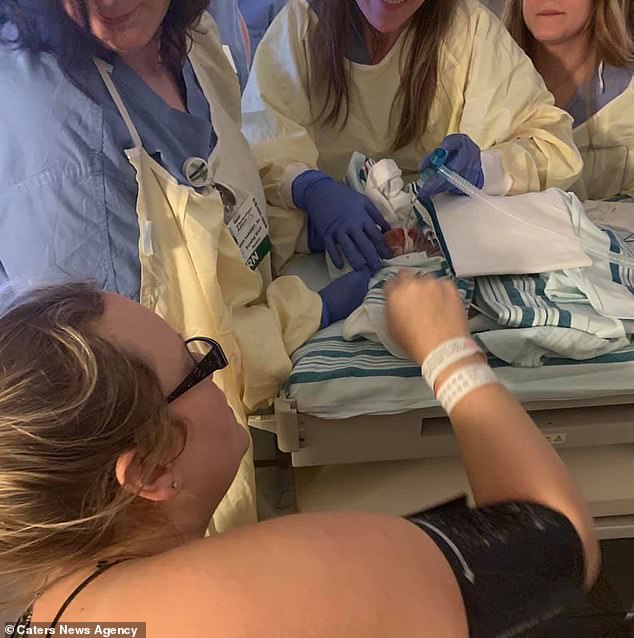 Kaylie after giving birth with one of the babies before they were taken to the NICU for treatment. Declan and Rowan were both stabilized right after being born 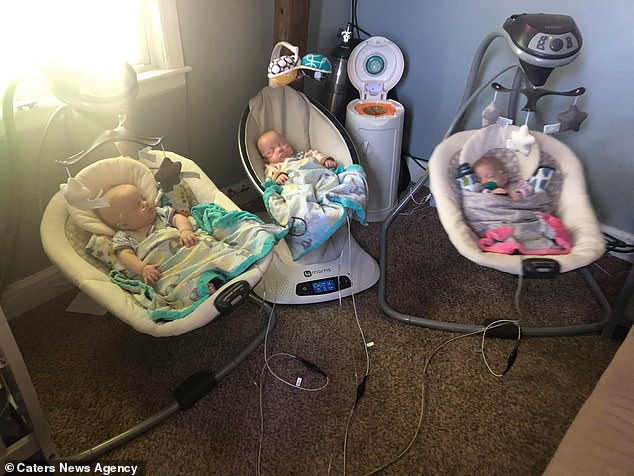 The triplet finally home after their four-months-long NICU stay in hospital. They spent several additional months on oxygen 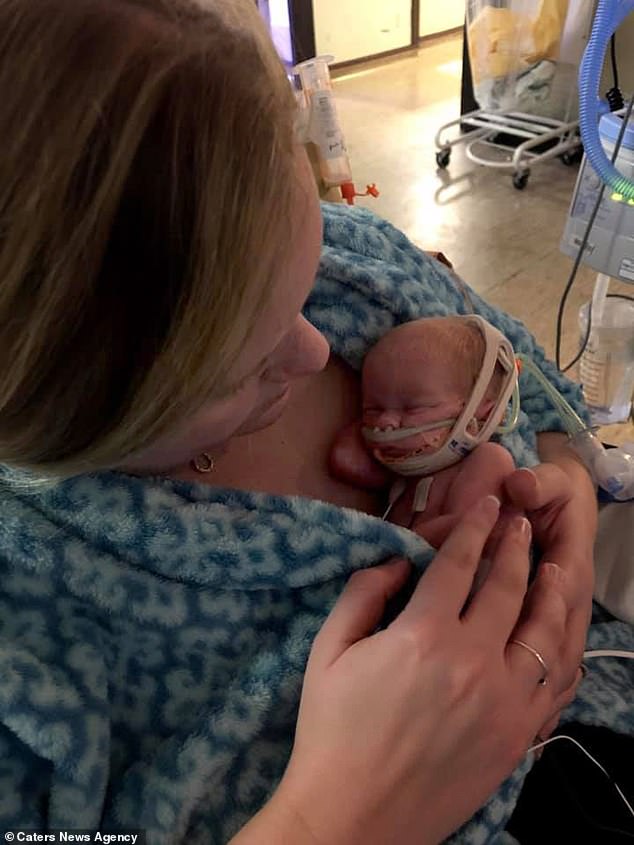 Kaylie with one of the babies during a visit to the NICU. She said throughout the whole ordeal, Brandon and her never lost faith 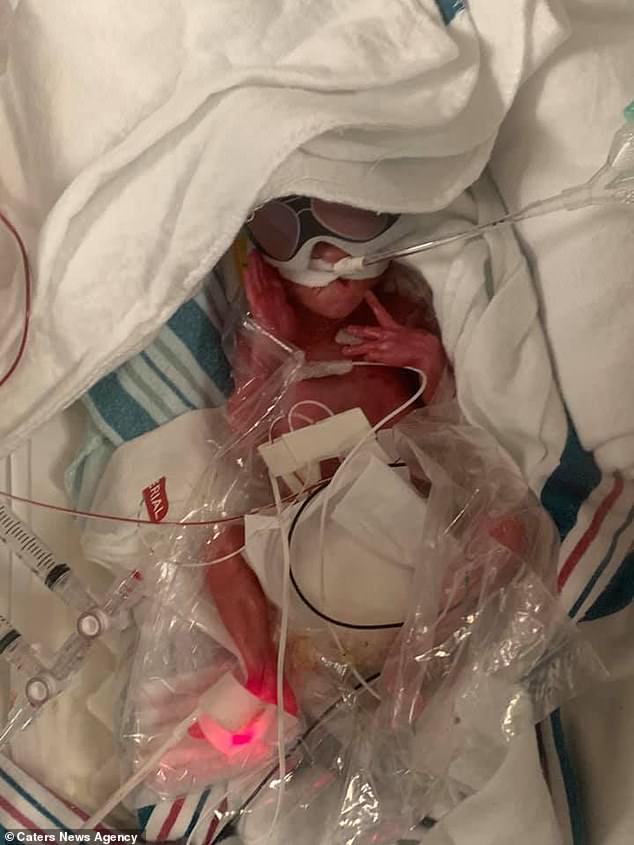 One of the babies in the NICU after being born more than 21 weeks premature. The babies were gradually weaned off oxygen after they made it home

‘Rowan was the next baby to come home on April 30, and Cian came home on May 4. And we finally had our family at home together.

‘And although it was amazing, it was terrifying. They were all still on oxygen so we hardly left the nursery.

‘But by Autumn they had all been weaned off the oxygen.

‘They are all breathing perfectly and growing great. They are hitting all of their milestones and aren’t behind at all.

‘They’re healthy, thriving and even close to walking which is incredible because we were never sure that they were going to make it.

‘I am so proud of them for the fight they fought.’

Kaylie currently holds the record for the longest interval between the birth of triplets.

The world record for longest interval between the birth of twins is held by Molly and Benjamin West, who were born 90 days apart in 1996.