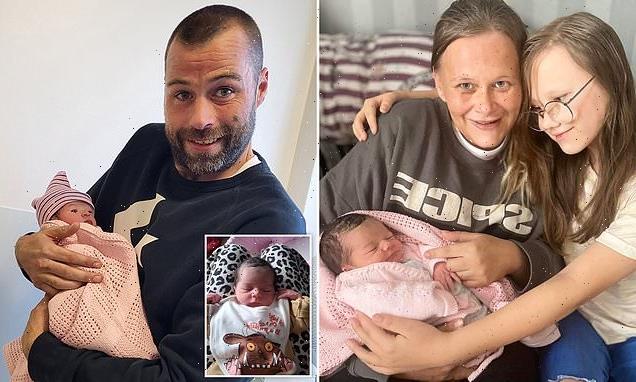 A mother-of-four has given birth on her own birthday for the second time, saying she ‘can’t wrap [her] mind’ around the unlikely situation.

Marie Barton, 34, from South Oxhey, Hertfordshire, already shared her September 20 birthday with first daughter Lola, now 11, and has now had another baby girl, Kady, born on the same date.

And the coincidences didn’t stop there.

‘It’s mental – you couldn’t make it up. My mind can’t wrap itself around it.’ 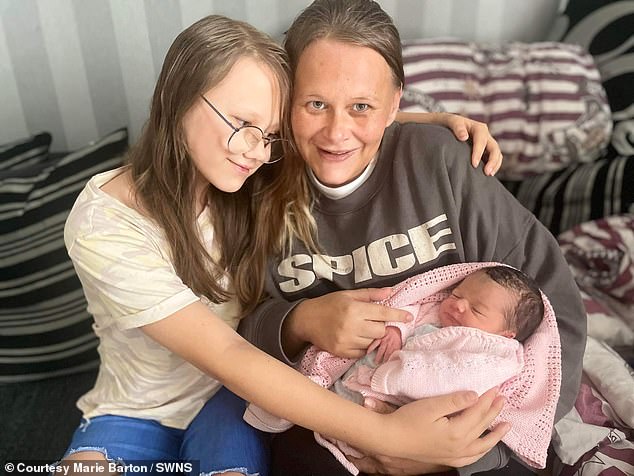 Mother-of-four Marie Barton, pictured with her children Lola and baby Kady, shares her birthday with the two girls, after giving birth on her birthday for the second time 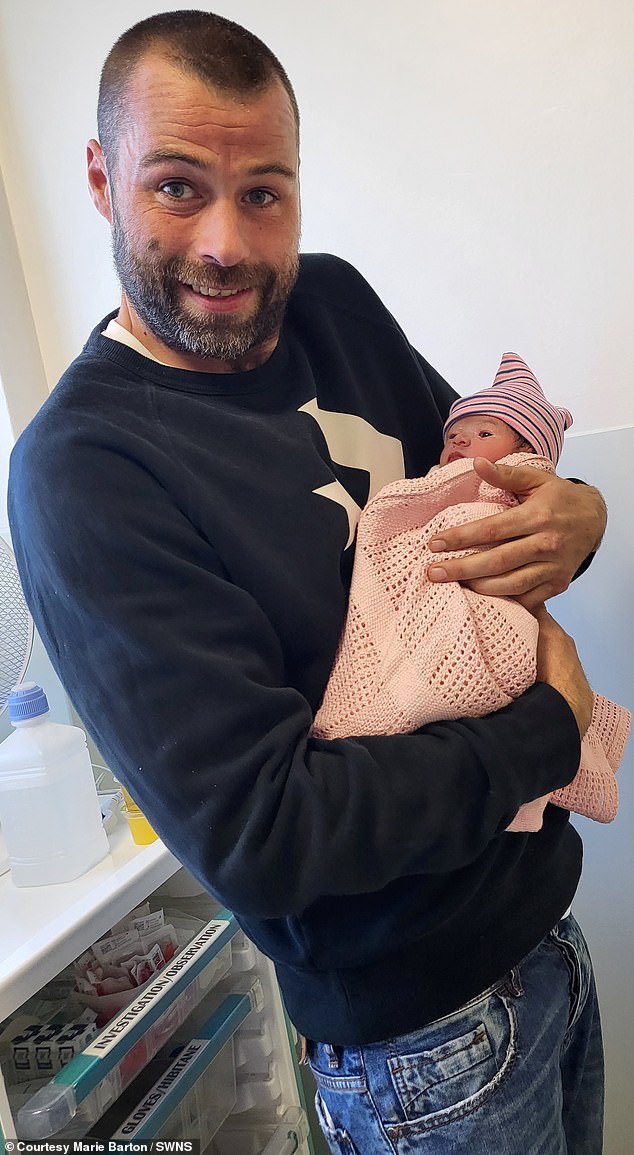 Marie’s partner Joe Mooney, pictured here with his daughter Kady, says he had a feeling from early on in the pregnancy that Kady would be born on Marie’s birthday

Marie, now a mother-of-four, revealed she actually went into labour the day before her birthday but Kady clung on long enough to join the September 20 club.

She said: ‘I’m even there thinking I’ll have her within the hour, she’ll be born the 19th, but no she actually held on till the 20th as well. I genuinely cannot believe it.

‘Even more incredibly, the baby wasn’t even due for three weeks.

‘I had no intention of her being born early. She was due the 11th of October!’

Dad Joe Mooney, 34, had his suspicions from the first scan.

He said: ‘I said it from the beginning, from the first scan, that it was going to be on her birthday. 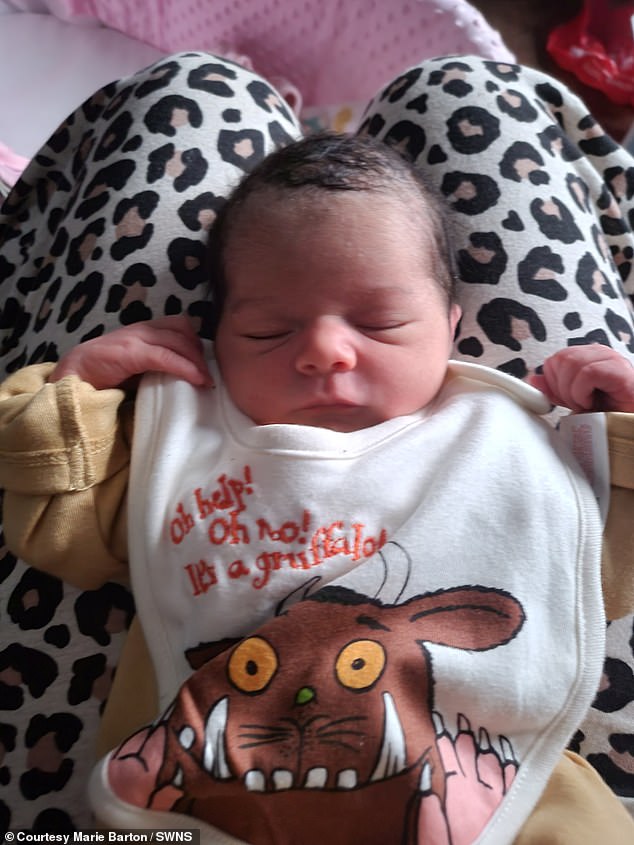 According to Marie, her 11-year-old daughter Lola thinks that baby Kady (pictured) being born on her birthday was the ‘best present she’s ever had’

‘I just had a weird feeling that it would happen again.

‘After being sent home at 8pm on the 19th after visiting hours ended, I was back up there at 11:30pm. She hadn’t quite gone upstairs yet so I knew it was definitely going to be after 12.’

Marie, who works as a teaching assistant, said everyone she told has been stunned by the lottery-level odds, with her daughter Lola being over the moon at the news.

Ms Barton said: ‘Lola thinks that it’s the best present she’s ever had – so that was quite beautiful.

‘She’s just delighted. Obviously she had to spend her birthday with Nan and uncles and aunties but she said it was the best birthday she could imagine having a new sister.’ 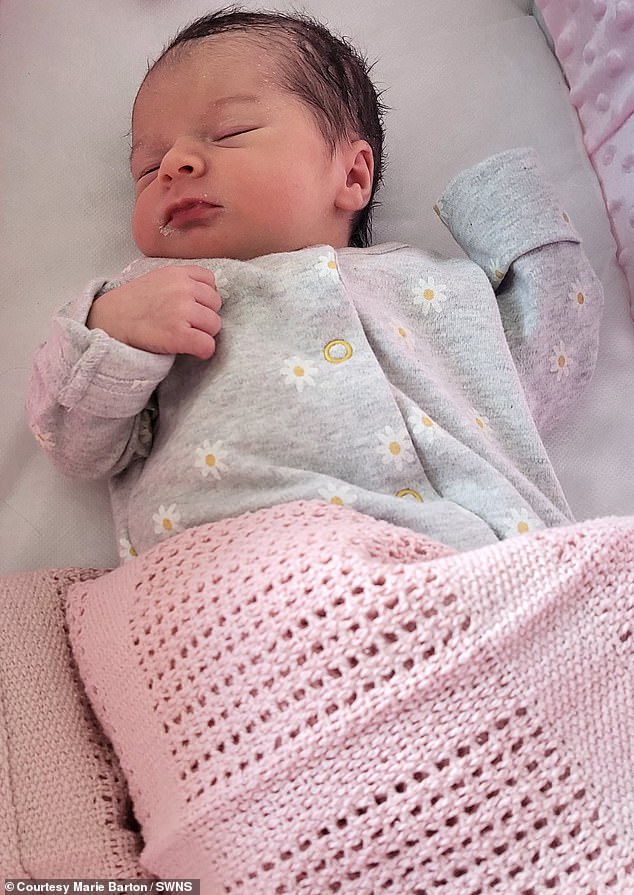 Joe, a builder, added: ‘All of them are such good kids, they’ve been over the moon. There has been no jealousy because of the new baby, they’ve all loved it and took on the role.’

After defying the odds, Mr Mooney went out to get a lottery ticket to see if the streak would continue, but only managed to get one number.

He said: ‘It looks like I have got all my luck and that is all I need. I have got my own little lottery.

‘But I might need to win the lottery when it comes to their birthday.’