“It was extreme. Like walking to the bathroom was like walking a marathon,” Gilmore said in an interview with VCU Health. Her daughter was born three months early, weighing just three pounds. And while baby Khori grew into a healthy girl, Gilmore’s health started deteriorating.

The 37-year-old mom was experiencing heart failure and she need a transplant. This August she was hospitalized and started to get discouraged about her chances of receiving a new heart. She says four hospitals declined to put her on the transplant waitlist.

“There were so many different factors why I was denied that I didn’t even know any more,” Gilmore said. “My local hospital was ready to pull the plug on me. They said, ‘There’s nothing more that we can do.'”

Gilmore was preparing to die. She wrote letters to her kids to read in the future, in case she wasn’t there. “Everything set in,” she said. “The first thing that popped into my mind was just sit down and write down everything that I would say if I was here – when my daughter went to prom and married and stuff like that. If I wasn’t here, this is what I would want to say to her.” 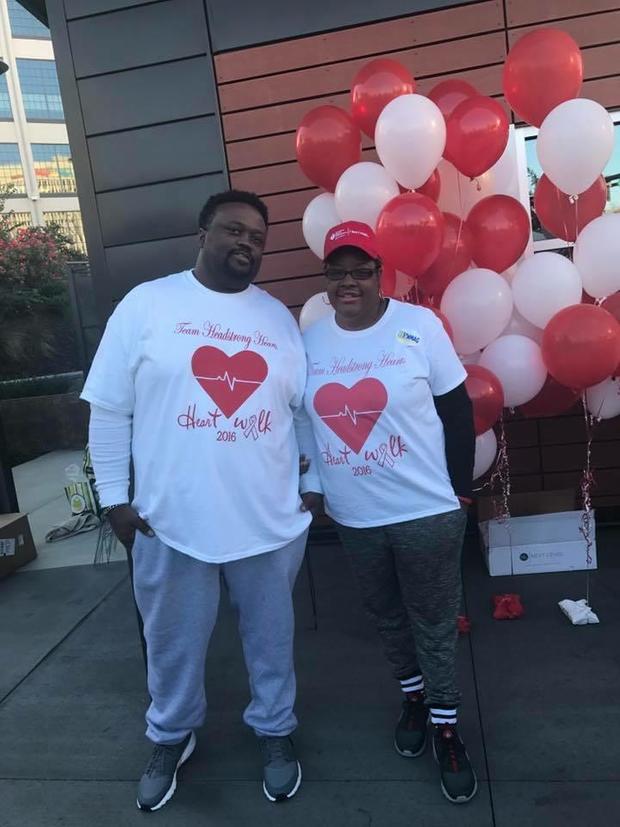 Gilmore suffered from heart disease for 8 years before receiving her transplant.

Gilmore wrote these letters while on the way to her fifth and final hospital: VCU Health in Richmond, Virginia. This is where her life completely changed.

She was on her deathbed when she was transferred there, but the doctors at VCU Health would not let her die. “When I got here and I talked to Dr. Tang, he’s like, ‘Well, what kind of information did they give you [at the other hospitals]?’ And I was like, ‘They just said I was too much of a risk.'” Gilmore remembered. “And he’s like, ‘Nope. We don’t believe that here.’ He said we don’t believe that.”

Dr. Tang had faith in Gilmore’s recovery – and he instilled a new faith inside of her. “When she was transferred, she was pretty sick. She was in cardiogenic shock,” Dr. Daniel Tang said in an interview with VCU Health. “So, heart in failure.”

Dr. Tang evaluated Gilmore for a total artificial heart. It was a solution that helped save her – but it was temporary.

Artificial hearts are “often done in the sickest of patients, who are at high risk for complications,” Dr. Tang said. “And as a consequence of that, the challenges they face in terms of being able to recover and go on to a transplant are greater.”

“Having that artificial heart required a lot,” Gilmore said. “That thing scared me to death because they’re taking my heart completely out.”

The artificial heart was a success and Gilmore started referring to her doctors as her “dream team.” She was able to go home and await heart No. 2 – a donor transplant.

“We had to find a donor with the right size, right blood type,” Dr. Vigneshwar Kasirajan, who is a part of Gilmore’s “dream team,” said.

About a month later, the dream team called Gilmore and told her the good news – they may have found a heart. She was astounded by how quickly it happened. “I was like, ‘I just left there!'” 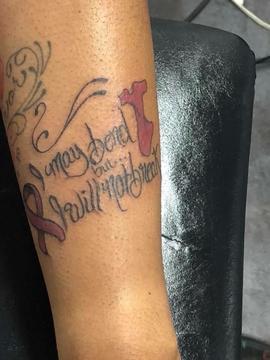 Cherron Gilmore got a tattoo on her arm with a red dress – the symbol of the fight against women’s heart disease – along with the words, “I may bend but I will not break.”

Gilmore returned to VCU Health to receive her second new heart – this one for keeps.

“I woke up and I felt like a brand new person. I put my life in them, and they breathed it back into me,” Gilmore said about the team of doctors. “I haven’t felt like this in a long time.”

Just before the holidays, Gilmore returned home to her kids. Her husband captured video of Khori running to the car as it pulled into the driveway, anxious to hug her mom again. The doctors at VCU health didn’t do it just for Gilmore – they did it for her kids, too.

Now, Gilmore has a new motto that she has tattooed on her arm: “I may bend, but I will not break.” She also tattooed an image of a red dress – the symbol of the fight against women’s heart disease.

Gilmore says she’s taking the holiday season to reflect on the second chance at life she was given.

The doctors who gave a new heart to Gilmore also restored the heart of her family. The Gilmore family missed their strong matriarch, and is ecstatic to have her home for the holidays.