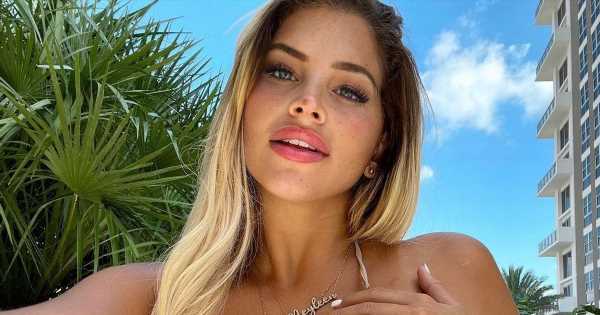 Model Neyleen Ashley currently claims she has the "biggest breasts in the US".

However, that is all set to change, as she is now planning to get her implants removed.

The 33-year-old says she wants the implants taken out as she's currently suffering from painful migraines and back tension due to their huge size.

The social media influencer from Florida, US, who boasts 2.5 million followers on Instagram (@neyleenashley), is known for her trim figure and good looks – however, her appearance has come at a high cost, both figuratively and literally.

Growing up, Neyleen "dreamed" of having the body she does today and used to stuff her bra with paper and use double push-up bras to enhance her breasts.

But after having undergone three boob jobs – taking her chest to the largest size legally allowed in the US – she is now facing complications and plans to have the implants removed.

"I’ve always suffered from horrific migraines but they got worse three years ago,” Neyleen said.

"My boobs also stop me from running and exercising."

Talking about getting her implants taken out, the model added: "I plan on getting my implants completely removed and doing a fat draft, or just getting a smaller implant instead.

"Several doctors have advised me that it will be major surgery, where I will have a lot of scarring and tissue removed."

She recently shared her struggles on TikTok, where she has received 3.4 million views and over 244,300 likes on one post.

In the clip, the words "Me getting the biggest legal implants you can get in the US" can be seen across the screen.

As she poses with her hands on her hips in discomfort, Neyleen writes: "My constant back pains, migraines and wanting to remove them."

She ends the video by pulling up her breasts, with the text "but they’re also my money makers" shown in the clip.

The video has received mixed reactions among social media users.

“I don’t mind holding them for you, I’m a gentleman,” one viewer commented.

Another person wrote: “Why would u want them.” [sic]

"Idk man I think you'd be just fine without them," one viewer said. [sic]

Someone else commented: "Every time I see your videos I fall more in love."

“If u want to, get rid of em. It is ur health and that’s what matters,” another person said. [sic]

This isn't the only time Neyleen has suffered complications from her boob jobs.

When she got her first breast implants at 18, she claims these were "done wrong" – with one breast significantly higher than the other.

Although she wants to remove her implants, she is holding off to find the right doctor and finish having children before going back under the knife.

Get all the biggest Lifestyle news straight to your inbox. Sign up for the free Daily Star Hot Topics newsletter.