‘Your design is very cool!’ MI5 worker is praised over ‘brilliant’ personal response to a boy, 10, who wrote to the service with an idea for a new ‘spy suit’

An MI5 worker has been praised over their ‘brilliant’ response to a 10-year-old boy who wrote to the security service about his ideas for a spy suit.

Schoolboy Daniel, from Derbyshire, shared his designs with the agency earlier this month after taking an interest in MI5.

Taking to Twitter, his mother Julie Broad revealed that he received a personal letter just days later from employee Charlie Rhodes who praised his suit as ‘very cool’ and said it has ‘many interesting features’. 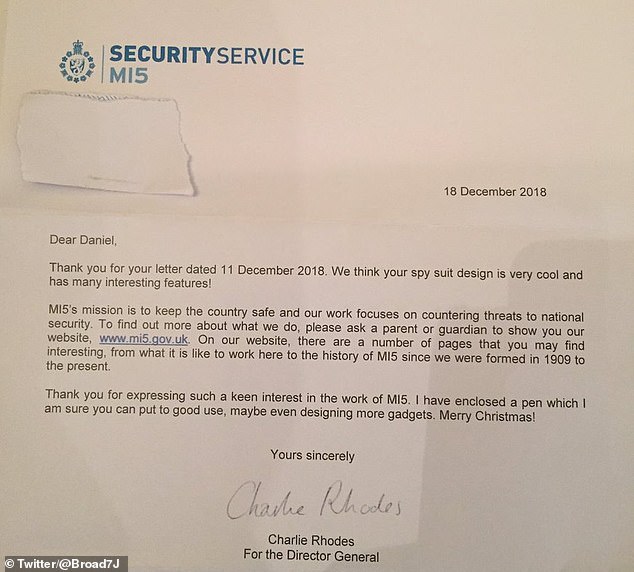 Schoolboy Daniel, from Derbyshire, shared his designs with the agency. Mother Julie Broad shared this snap of the letter her 10-year-old son received from an MI5 employee

She praised Charlie Rhodes for personally responding to Daniel’s letter. Her tweet has now racked up more than 20,000 likes and nearly 2,700 retweets

Charlie, who was writing on behalf of the director general, even included a pen for the little boy to use for ‘designing more gadgets’.

Daniel’s mother took to Twitter to praise Charlie for taking the time to write back, saying it made a huge impact.

She wrote: ‘Major, major shout out to our security service MI5 and especially Charlie Rhodes for personally responding to my child’s letter.

‘You have no idea of the impact this has had! Engaging the future workforce brilliantly.’

Speaking to Femail about the letter, Julie said: ‘The response has been totally amazing, with some fantastic return stories and [so] much banter!

‘I merely wanted to share how much of an impact someone taking the time to listen and give feedback on my son’s curiosity and creativity has had.’

Twitter users shared their own stories of companies and agencies writing back to their letters as children. One even joined the navy a few years after writing to Earl Mountbatten of Burma as a result

The letter struck a chord with many users who shared their own stories of companies or organisations having a huge impact on them in the past.

Hilton Holloway said: ‘Happened to me when I was 10 or so in 1977. Wrote to Manchester airport asking about plane spotting.

‘A chap called Martin Sweetapple replied with paper timetables. We were nobodies from a nowhere town. His reply had a massive impact on me – to get out and ask questions.’

Catherine May added: ‘The RNLI have my lifelong devotion, because they replied to my childhood letter. It’s important that stuff.’

Another user, who later joined the navy, tweeted: ‘I love this. Well done to Daniel for writing and Charlie Rhodes for replying.

‘I remember writing to Earl Mountbatten of Burma asking if he could arrange for me to experience some time in a RN warship – I was 14. He wrote back – I still have his letter. And a few months later…’

Others praised Charlie and predicted his response would make a huge impression on the ten year old.

Wayne John wrote: ‘What a fantastic response and not at all patronising or dismissive.

‘I’d love it if Daniel ends up working at MI5. I do hope the pen has invisible ink though. Well done Charlie Rhodes. We could do with more like you.’

Ryan wrote: ‘I love it when companies do this sort of thing, makes me think the world’s not such a bad place.’

Lise Elliott added: ‘Brilliant…it supports my faith in human nature (which can take a hit sometimes).

Others said they wanted to see the super suit themselves, and joked the letter would self destruct

Thank you for your letter dated 11 December 2018. We think your spy suit design is very cool and has many interesting features!

MI5’s mission is to keep the country safe and our work focuses on countering threats to national security. To find out more about what we do, please ask a parent or guardian to show you our website, www.mi5.gov.uk. On our website, there are a number of pages that you may find interesting, from what it is like to work here to the history of MI5 since we were formed in 1909 to the present.

Thank you for expressing such a keen interest in the work of MI5. I have enclosed a pen which I am sure you can put to good use, maybe even designing more gadgets. Merry Christmas!