Kendall Jenner fans have been running wild with theories the past couple of days trying to figure out who her secret admirer is. While many were totally convinced that the love letter Jenner posted to her Instagram Story on Monday, Dec. 10 was sent by Harry Styles, Jenner herself revealed the true sender. And there were two of them! So, who were Kendall Jenner’s secret admirers? Mert Alas and Marcus Piggott, according to Jenner’s big Instagram reveal.

“Nice try my secret admirer’s actually @mertalas & @macpiggott,” Jenner wrote in her Tuesday, Dec. 12 Instagram Story. She also included a winking emoji with her caption, indicating that the whole thing was a big joke.

For those of you not in the know, Alas and Piggott are a photography duo who have been working together since 1994, according to Us Weekly. The pair have frequently photographed Jenner and the rest of her family, so they’re basically extended family themselves.

Up until Jenner revealed who the senders of the love note actually were, fans were theorizing who the secret admirer might be. In her original Instagram Story, Jenner shared a photo of the letter with the sender’s name blacked out. So, that made people go into Private Investigator mode to figure out who the letter was from. Almost immediately, some fans thought singer Harry Styles was the sender, while others were thinking it was Ben Simmons or even Anwar Hadid.

As for the letter itself, it read:

Here’s the photo Jenner posted on Instagram on Tuesday: 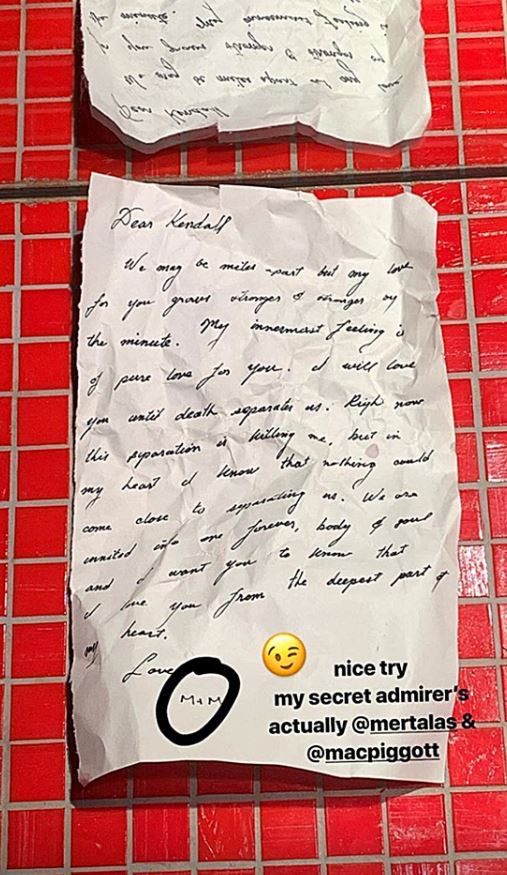 As for an explanation of why Alas and Piggott were writing Jenner this heartfelt letter, there isn’t one at the moment. My guess is that it’s all a big tease for some new project they’re working on, but who knows? All anyone really knows is that Jenner is well loved by these two photographers.

And for all those fans out there who were hoping and praying the love note was from Styles, some were pretty disappointed. Others simply laughed at the fact that people actually thought the letter was from Styles.

Here’s what some of them are saying on Twitter right now:

So, not everyone was convinced that letter was from Styles. And that makes perfect sense because Jenner does, in fact, have a current boyfriend. It would be a little strange for her to post a love letter from some other dude if it wasn’t her boyfriend or a publicity stunt, right? All in all, though, it looks like it was all for fun and it definitely made for a few interesting days on social media!