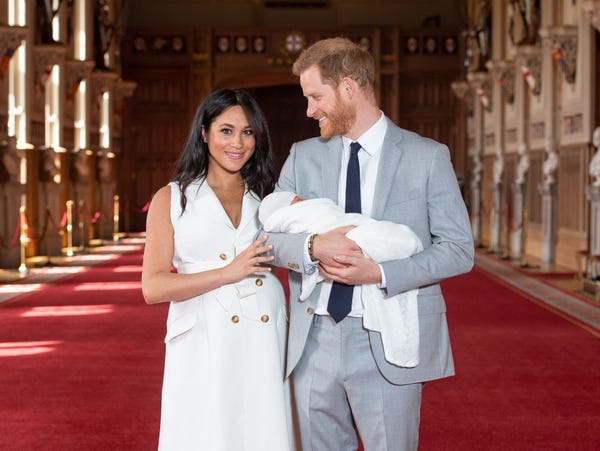 Prince Harry has shown that it is possible to be "feminist, and be masculine and a guy," Meghan Markle said.

She added her husband was setting a "beautiful example" for son Archie with his advocacy for feminism and praised Harry for being "comfortable" in supporting women's rights.

The former "Suits" star spoke to US rights activist Gloria Steinem on a recorded Q&A session for the feminist media platform Makers, in which they covered gender equality and female representation.

In the black and white footage, released on Wednesday, the duchess and Steinem sat socially distanced in garden chairs, separated by a low wooden table, for what was described as a "backyard chat."

The 39-year-old spoke of how her views on feminism had changed over time — adding it was not "mutually exclusive to be a feminist and be feminine."

Steinem then pointed out it was possible to be feminist, masculine and a guy, to which Markle replied "Like my husband!"

The duchess said: "I look at our son and what a beautiful example that he gets to grow up with a father who is so comfortable owning that as part of his own self-identification.

"That there's no shame in being someone who advocates for fundamental human rights for everyone, which of course includes women."

Markle returned to the US after she and the Duke of Sussex quit their lives as senior working royals in March.

The duchess's dogs, Guy the beagle and Pula the labrador, also made an appearance and sat at Markle's feet during the interview, in which she also spoke of her fears ahead of this year's US presidential elections.

The duchess said the coronavirus pandemic had given people a "moment of reset to re-evaluate what actually matters."

"I think it's often forgotten how women like you and so many others before you fought for us to just be where we are right now," she told Steinem.

"If you don't vote, you don't exist, it is the only place we're all equal, the voting booth," Steinem replied, admitting she was also worried about voter turnout.

"We can already see all the different challenges that we're facing … for example, if you're a person of color and you're in line, for potentially hours on end, and during that time someone tries to intimidate you to tell you that you should get out of line because you might be under surveillance, or any number of intimidation tactics, that are so scary.

"And then you think, 'You know, it's not worth it.' You decide to step out of line and relinquish your right to vote.

"That's bad enough, but then there's a ripple effect because whoever is in the back of the line says, 'Whatever they did to them … I don't want that to happen to me.'

"That, I think, is so frightening. But I wonder how we circumvent that and how we get people to feel empowered."