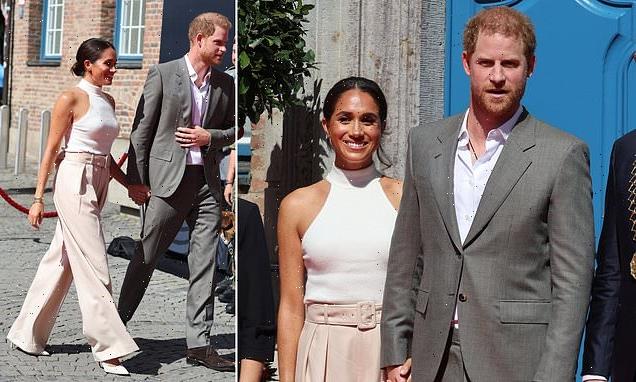 Minimalist Meghan! Duchess of Sussex is radiant in a £245 knitted cream top from US label Anine Bing, £1,040 Brandon Maxwell trousers and towering heels as she joins Prince Harry in Dusseldorf

Meghan Markle flashed a beaming smile while she walked hand-in-hand with her husband Prince Harry as the pair arrived in Dusseldorf for an Invictus Games event.

The Duchess of Sussex, 41, attended the event with Harry to mark the one-year countdown to the 2023 Games, which have been delayed due to the pandemic.

Megan looked elegant in a £245 cream knitted vest from LA-based designer Anine Bing and paired it with a pair of £1,040 beige wide-leg wool blend trousers from Beandon Maxwell.

She paired the top with simple, classy stud earrings and opted for a little eyeliner, blush and lip gloss to enhance her natural beauty. 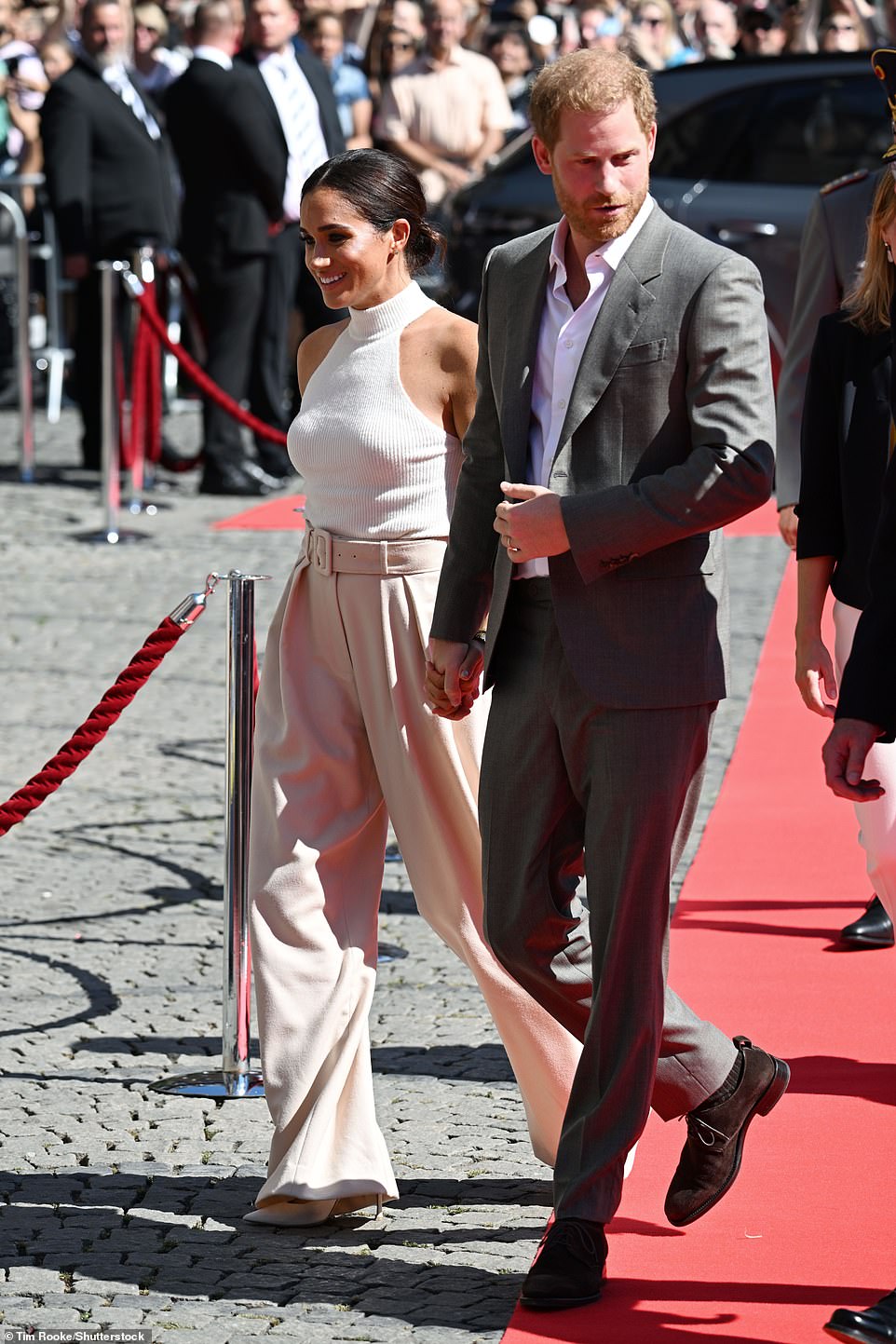 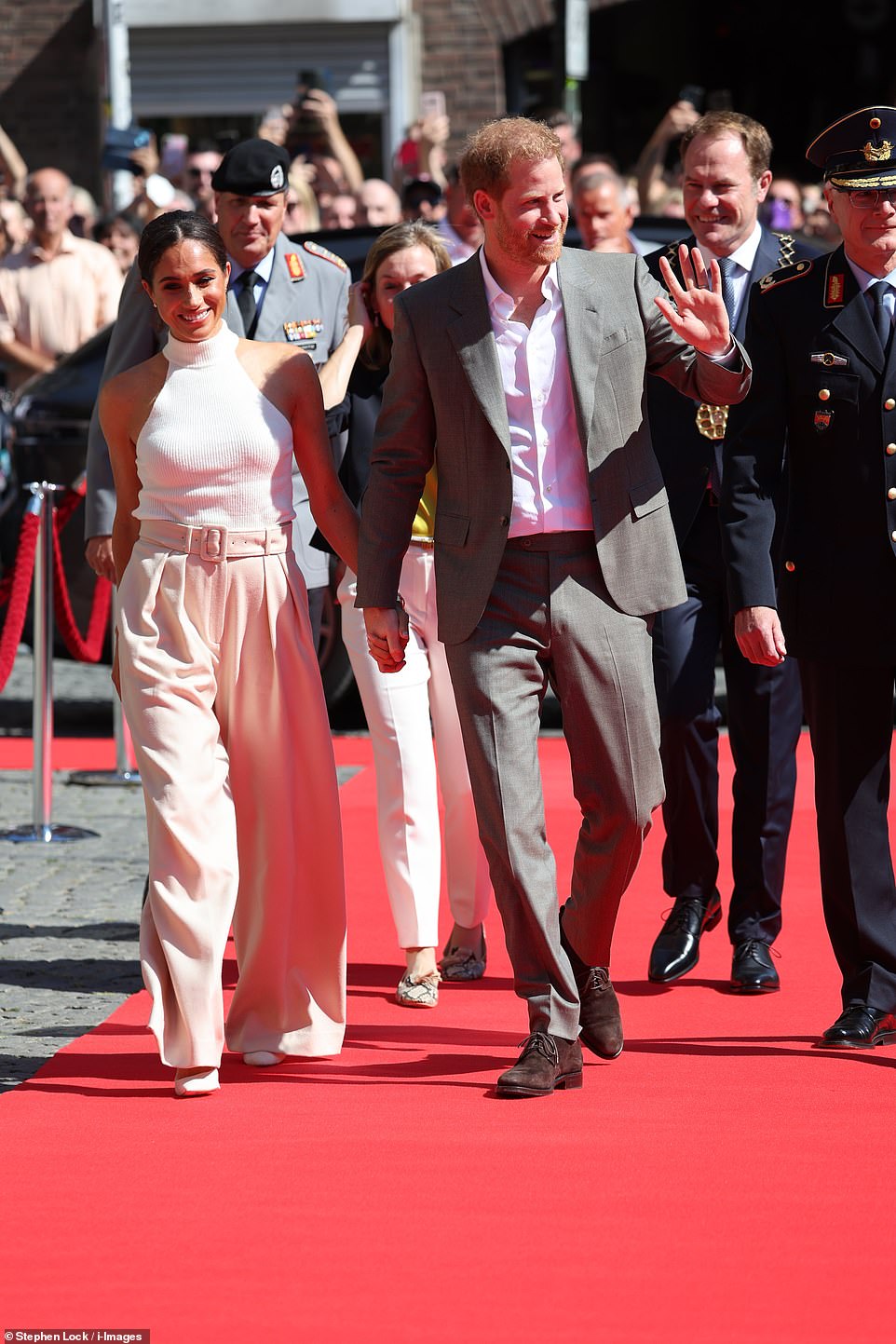 Meghan looked effortlessly elegant as she walked down the red carpet with her husband in a £245 cream knitted top and £1.040 wide leg trousers 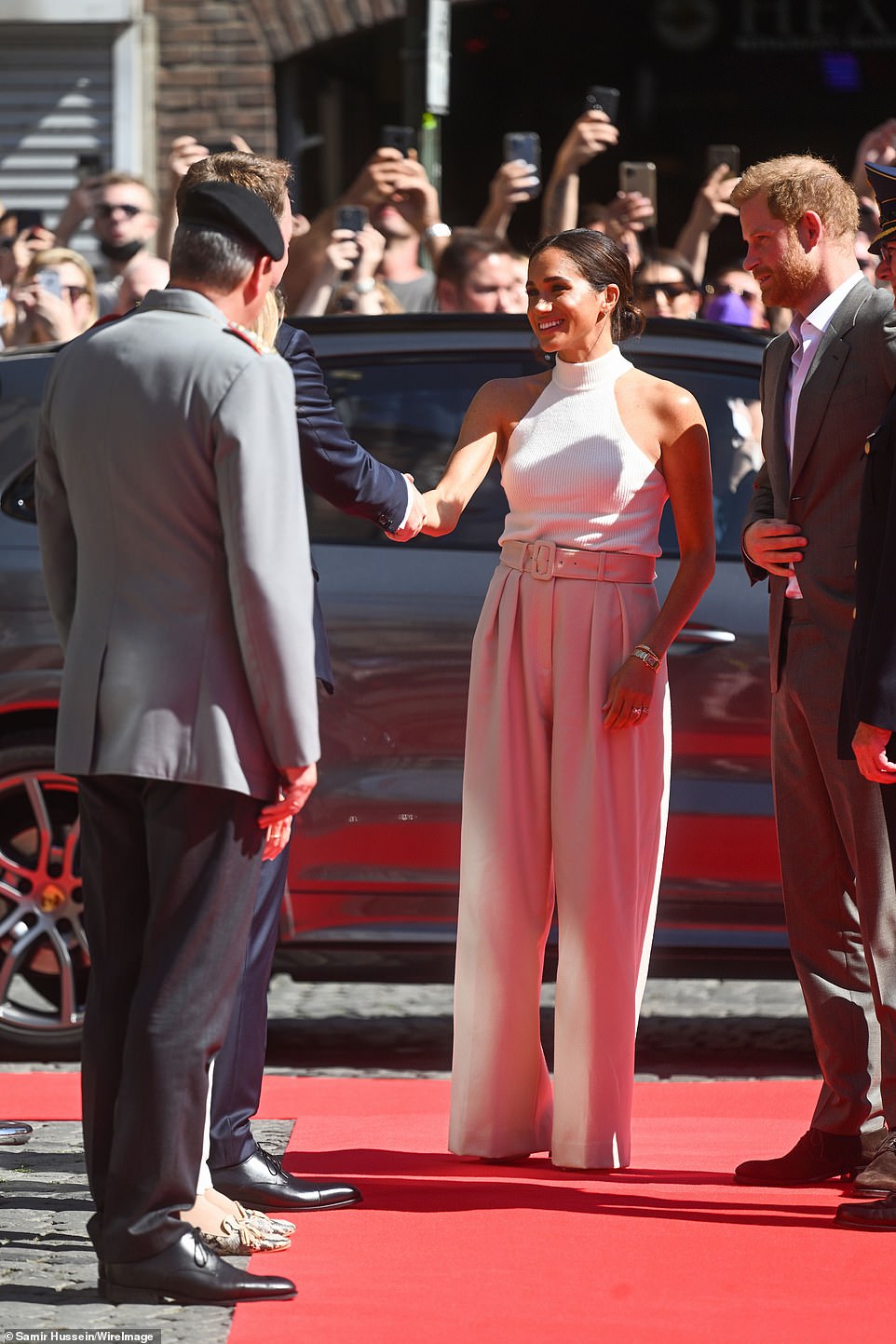 Meghan smiled as she shook hands with an official at the Invictus Games 2023 One Year to Go event, which marks the countdown to next year’s event 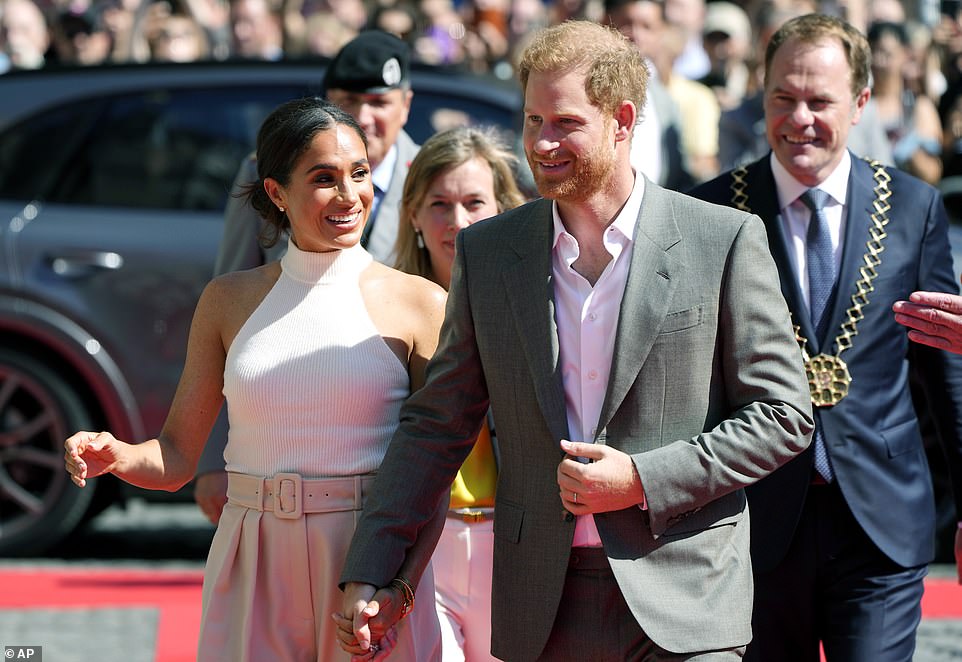 Harry and Meghan (pictured) will meet with officials and competitors at next year’s event, which has been delayed due to the Covid pandemic, in Dusseldorf 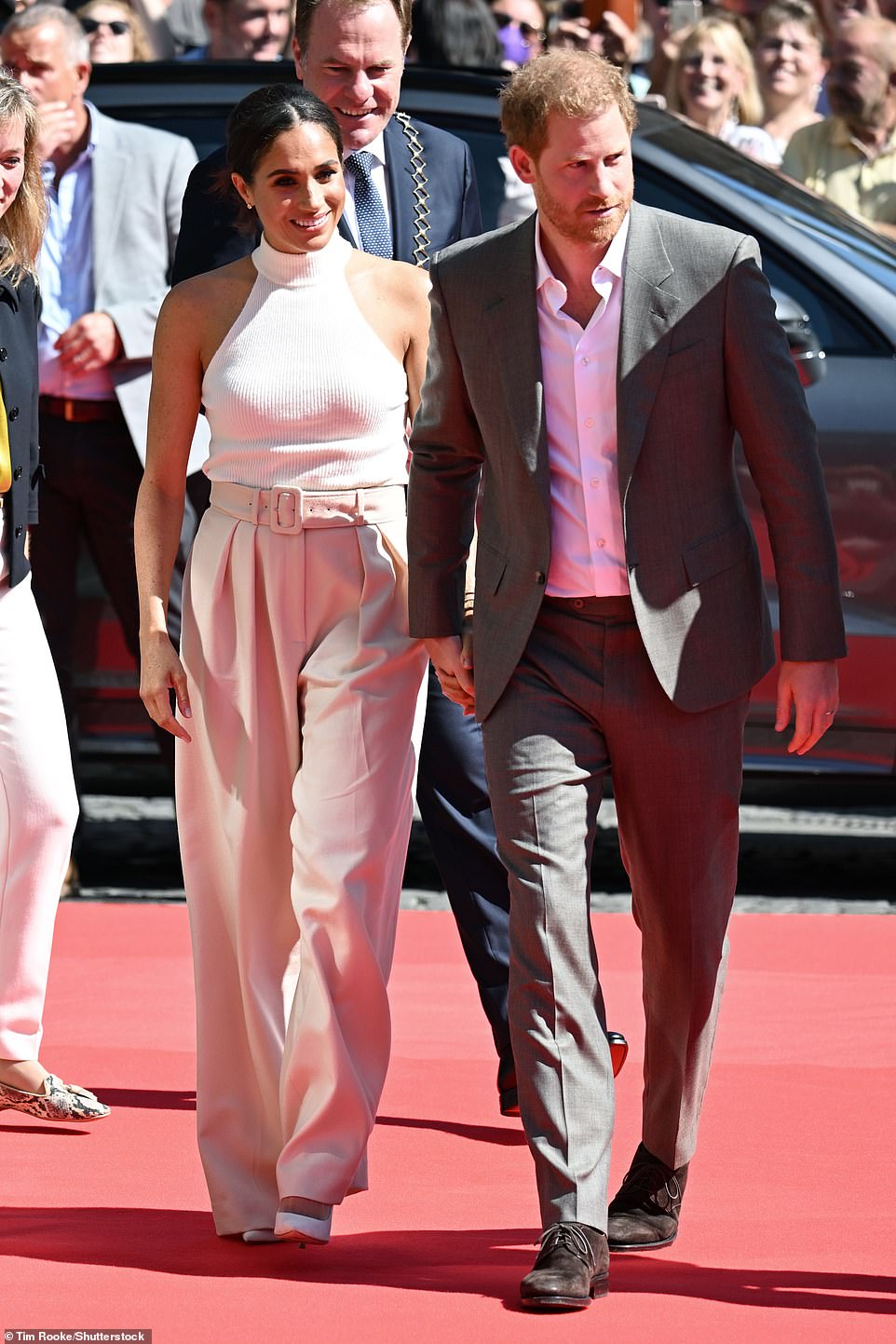 Meghan looked elegant in her understated look, in contrast with the radiant scarlet outfit she donned last night to address a crowd in Manchester 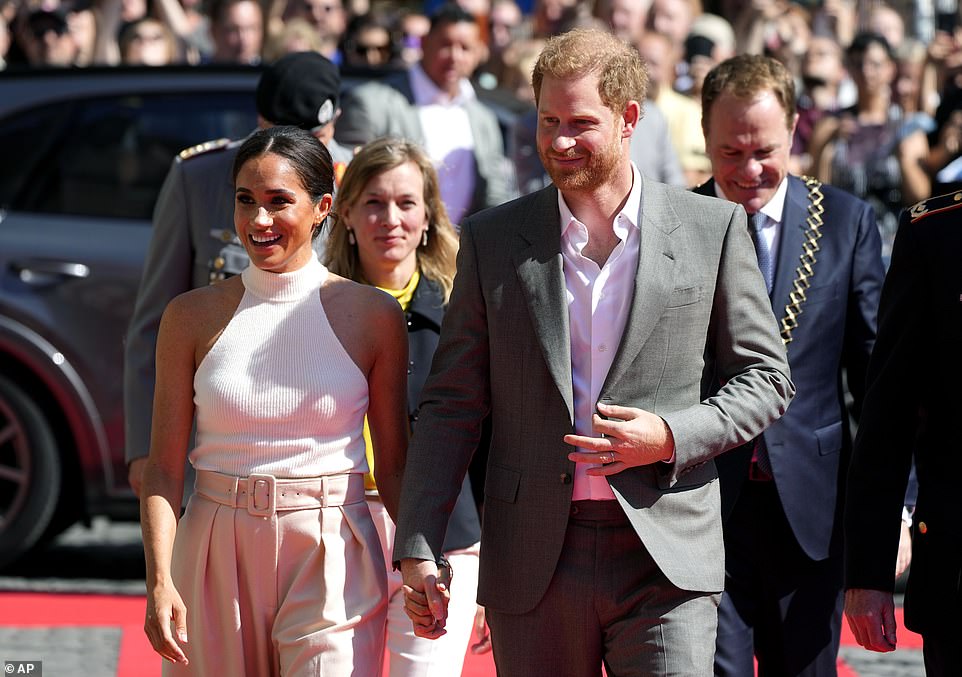 Meghan and Harry looked like the perfect pairing as they walked hand-in-hand as they arrived at City Hall, with Harry looking dapper in a dark grey suit and white shirt 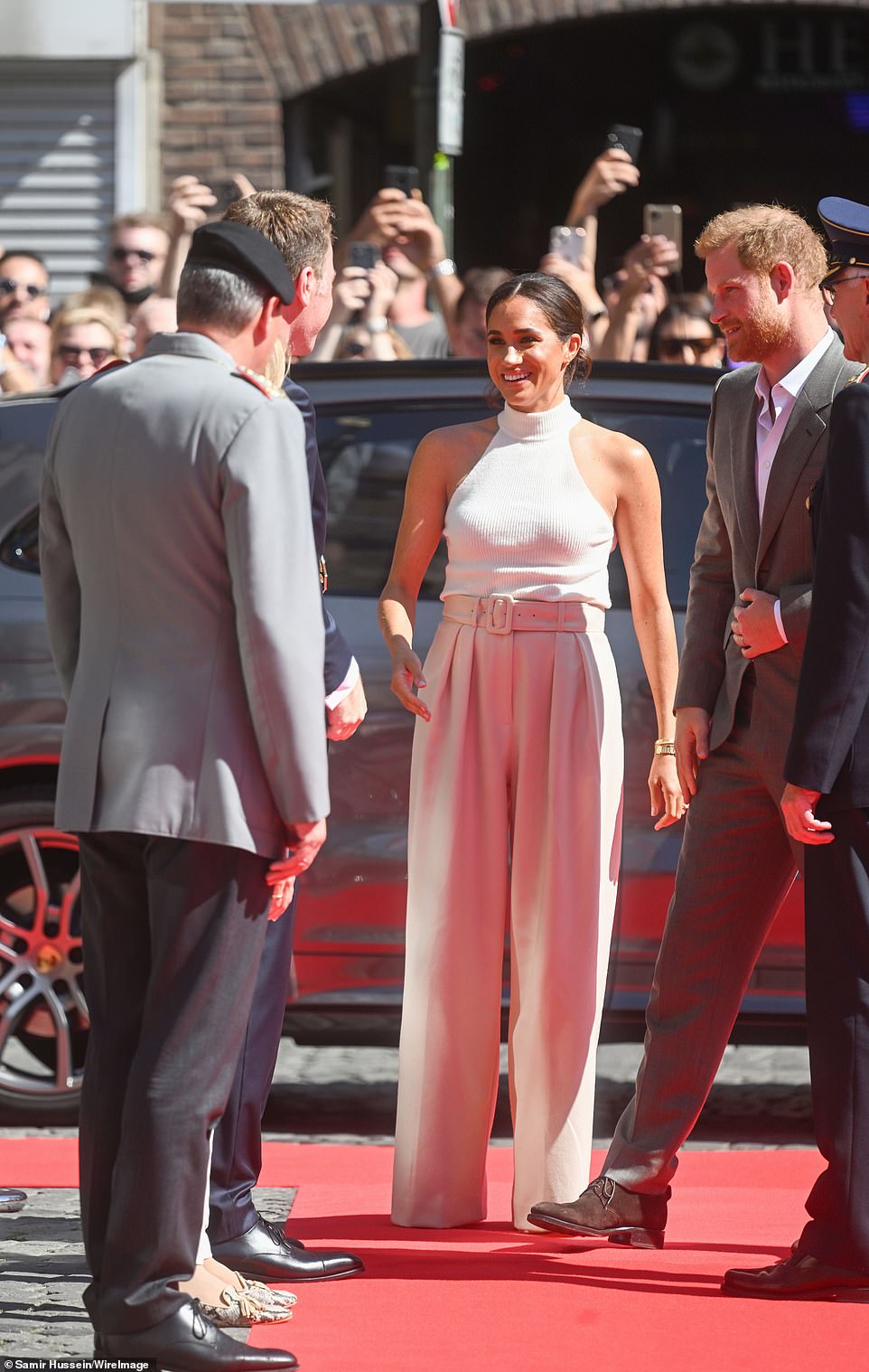 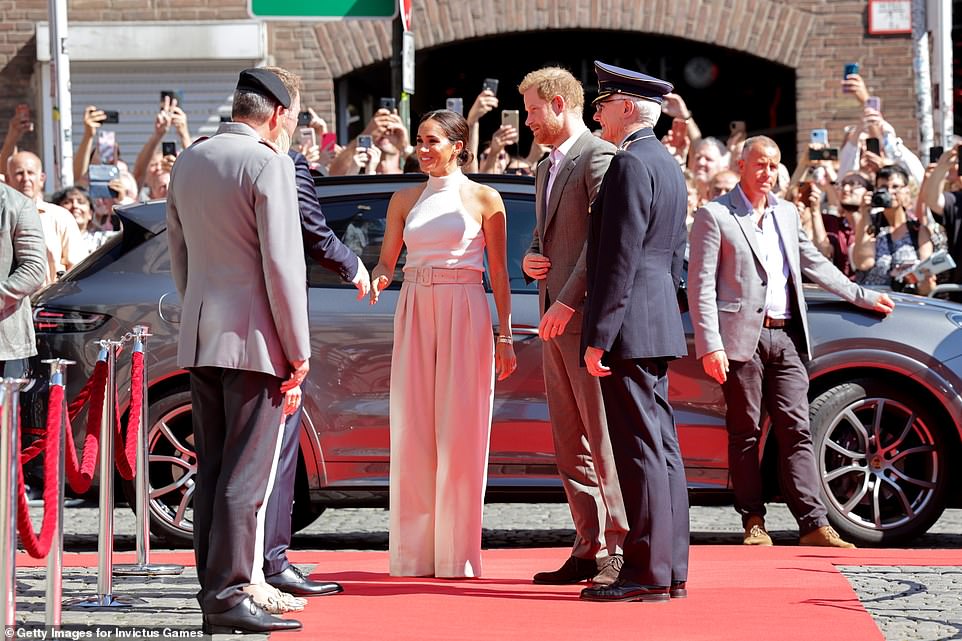 Meghan looked graceful as ever as she met with the officials ahead of the sixth Invictus Games event, which will be held next year following Covid delays 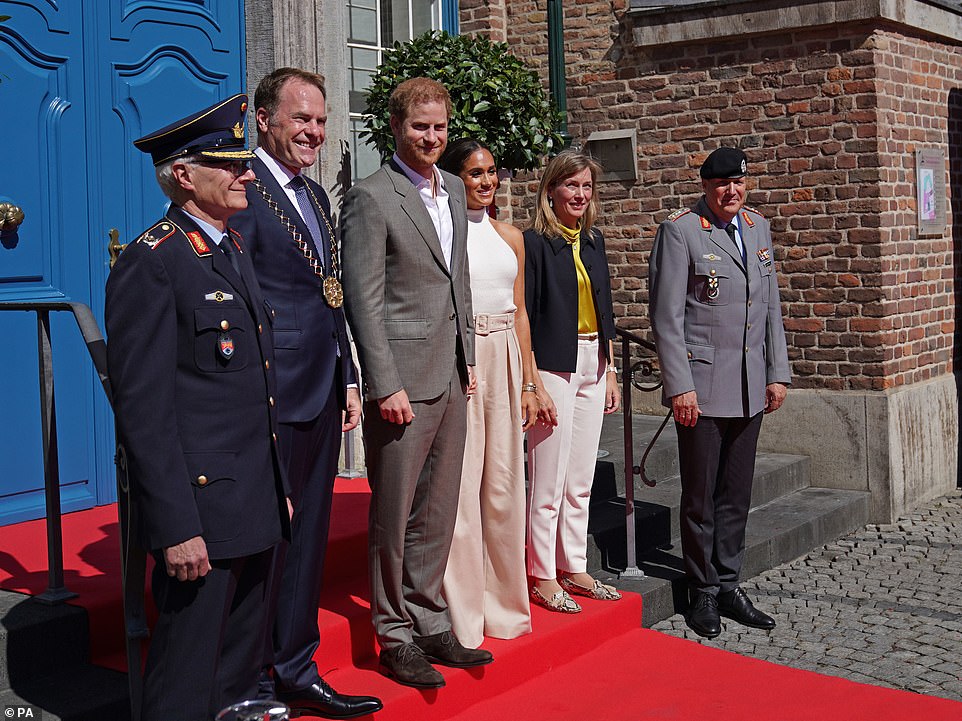 The couple posed outside City Hall in Dusseldorf, Germany alongside officials as the sun beamed down upon them for the Invictus Games One Year to Go event 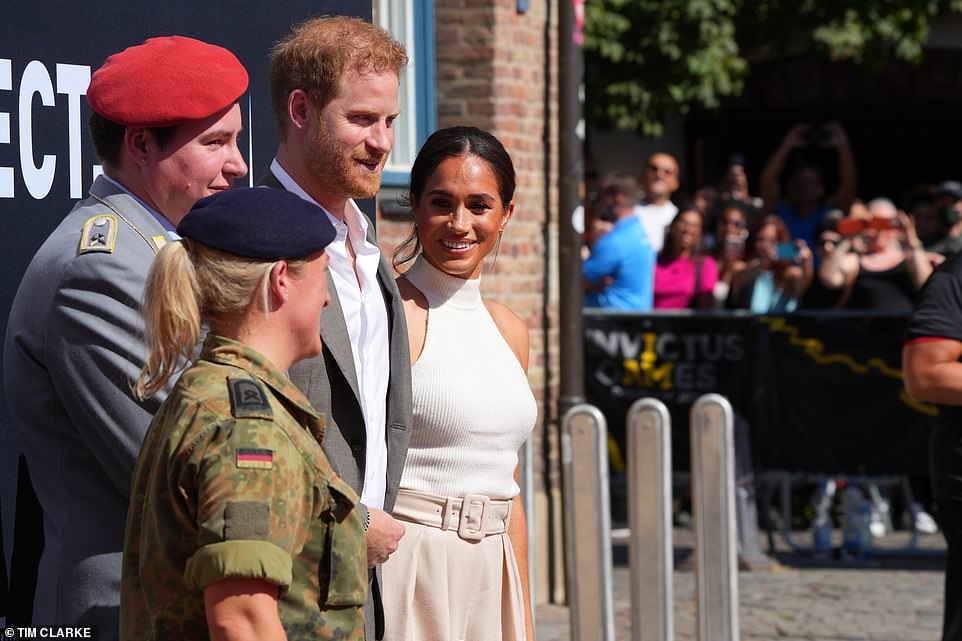 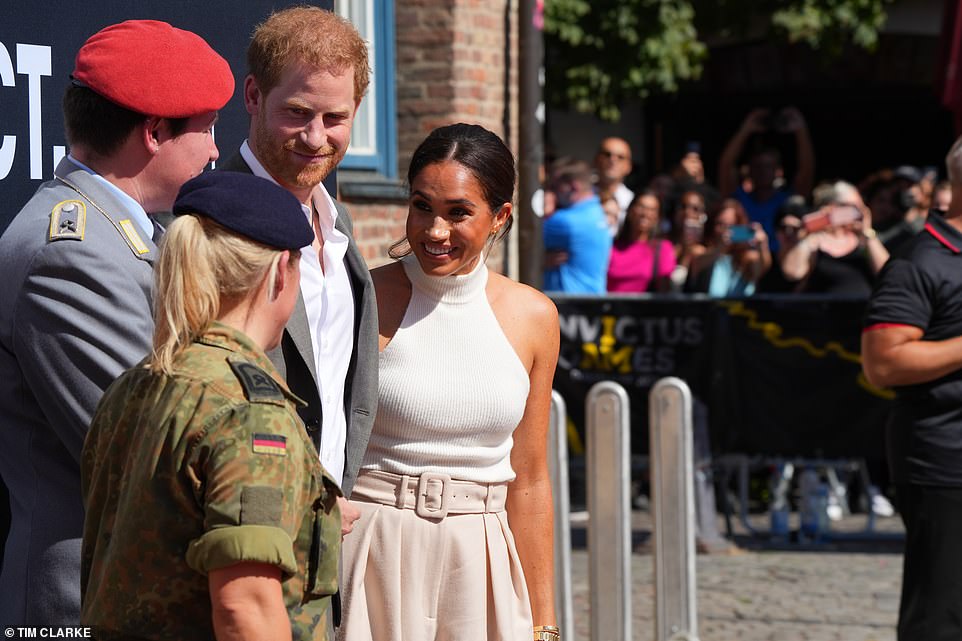 The Duchess chatted with a servicewoman from the German armed forces, looking radiant as the sun beamed down upon her 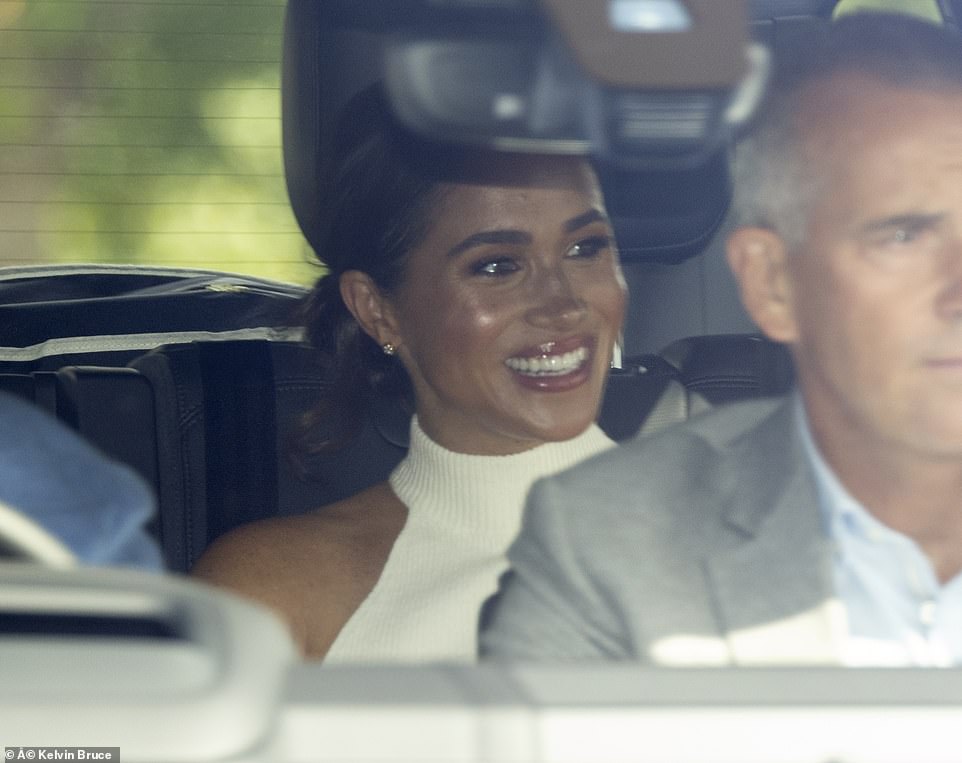 Meghan Markle, 41, beamed in the back of a Range Rover after spending the night at Frogmore Cottage as she headed to Dusseldorf, Germany 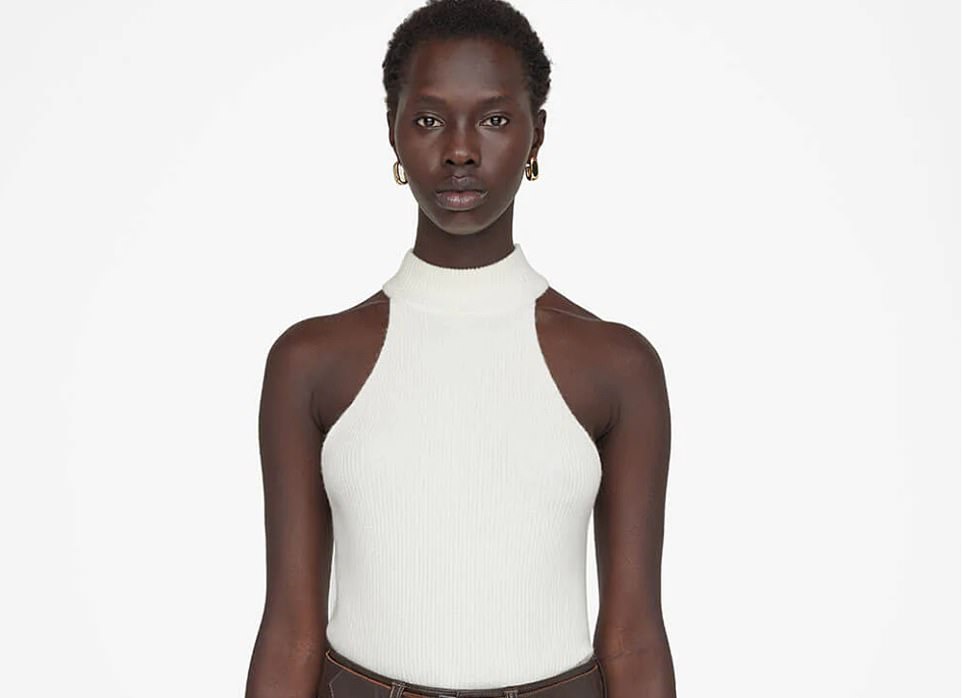 Harry and Meghan arrived in Dusseldorf after they were pictured leaving Frogmore Cottage earlier this morning.

The couple stayed in Windsor last night, which had been their permanent home until they departed the UK to live in LA.

They had been just half a mile from Prince William, Kate Middleton and their three children, who have recently moved there from London – but the brothers are not expected to meet amid reports of a deep rift.

Meghan’s more understated look comes the morning after she dazzled in a stunning Another Tomorrow scarlet blouse costing £471, paired with matching wide-leg trousers.

She wore the outfit to address the crowd at the One Young World summit in Manchester, held at Bridgewater Hall, where she made a seven minute-long speech about gender equality.

The Duchess of Sussex delivered the speech to young leaders from more than 190 countries in her role as a counsellor for One Young World and it was her first in-person speech in the UK since she and Harry stepped down as senior royals in early 2020. 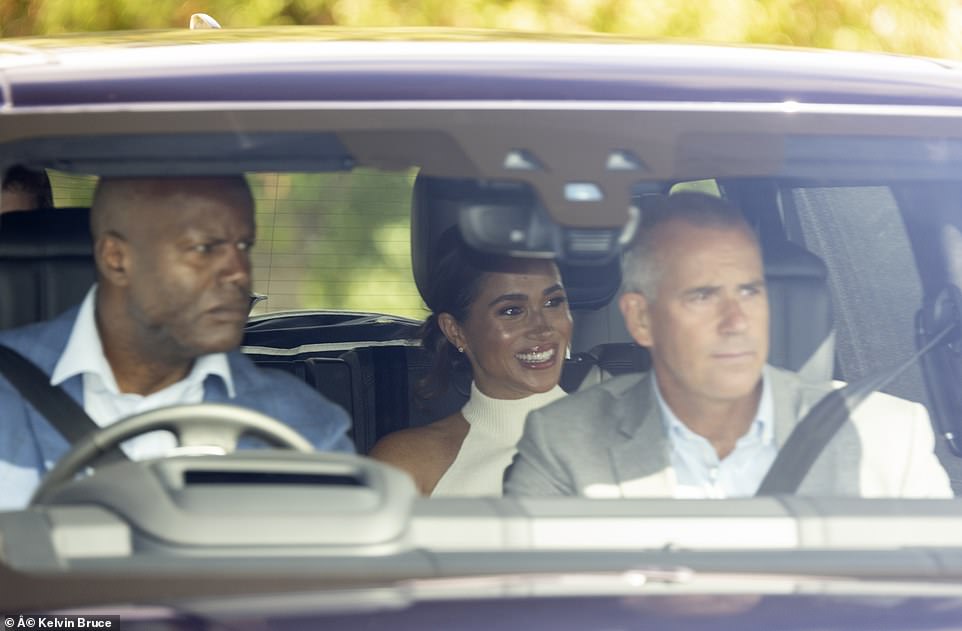 Meghan wore her hair in a neat low bun and accessorised her top with simple stud earrings, and wore minimal makeup 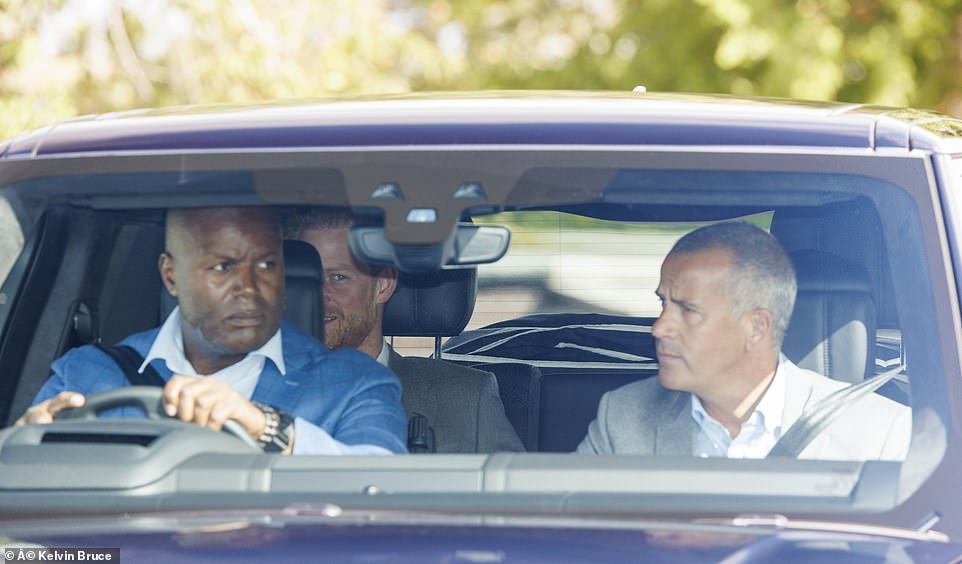 Meghan recalled the moment she was asked to take the role within One Young World and described it as a ‘pinch me moment’.

She said: ‘And there I was, the girl from Suits. I was surrounded by world leaders, humanitarians, prime ministers and activists that I had such a deep and long-standing respect and admiration for. And I was allowed in, to pull up a seat at the table.

The Duke and Duchess of Sussex surprised royal fans with their eco-friendly decision to take the train from London Euston to Manchester for the summit – after previously receiving criticism for flying in private jets.

The summit marked the first event in the Duke and Duchess’s whirlwind European trip – with the couple embarking on the second leg of their ‘lite’ royal tour in Dusseldorf, Germany, today.

The couple will meet officials and competitors in next year’s Invictus Games event to mark the one-year countdown to the event, which will be the sixth of its kind since Prince Harry, 38, founded the Games in 2014.

The Duke of Sussex, who served in the British Army for a decade, founded the games as a space for injured and sick servicemen and women to compete in an arena that allows them to show they are not limited by their injuries.

He was inspired to organise the Invictus Games after watching a similar event, the Warrior Games, in the US state of Colorado in 2013, in which competitors were injured servicemen and women.

The 2023 Games in Dusseldorf will be held in the Merkur Spiel-Arena – and have been delayed to next year due to the Covid pandemic.

Meghan and Harry will make the quick stopover in Germany before heading back to the UK on Thursday to attend the WellChild Awards, a charity of which Harry has been a patron for several years.