Prince Harry and Meghan Markle seemed distraught at that late Queen’s funeral – Meghan was even seen wiping away a tear from her cheek. It was difficult for the couple to support one another throughout the day as protocol kept them apart, but they did manage to hold on to one another when the opportunity arised.

Body language expert Judi James spoke to Express.co.uk about Meghan and Harry’s intimate moment, after discussing the couple’s general actions over the past 10 days.

She said: “It’s important to remember that Harry and Meghan came to the UK for the One Young World summit and to promote the Invictus Games.

“Then, suddenly, they were grieving the Queen, having some very difficult and awkward-looking link-ups with William and Kate and, of course, going through the emotional trauma of two funeral services – one of which was in the place they had their blissfully happy wedding ceremony just a few years ago.

“Harry has marched with his family behind his grandmother’s coffin and he has stood silent vigil with the other grandchildren. 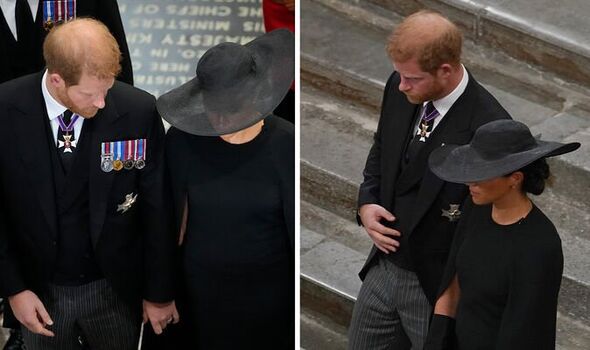 “There have been no body language signals of any reconciliation with his closest family members or even the sight of any eye contact or verbal communication between himself and his father.”

Judi went on to claim that “Harry and Meghan have looked isolated, but their response has not been the obvious one of in increase in touch rituals in public”.

“They appear to have been keen to keep a more subdued and low-key profile and this, as well as the way that many of their joint appearances have involved very formal choreography where royal couples were kept a distance apart from each other, has meant a subtler use of non-verbal tie-signs in public,” the body language expert said.

“There have been moments when Meghan in particular has placed a maternal-looking hand on Harry’s back, or when they have held hands openly, like their appearance in Windsor to look at the flowers, when we could see Meghan gently stroking Harry’s hand with her thumb in a gesture of reassurance within the hand clasp.”

On the day of the funeral, Judi noted how Meghan and Harry “broke ranks to clasp hands on the way out after standing in line behind the coffin”.

“There seemed to be a feeling of almost relief that they were able to join up again after so much raw emotion for Harry,” she said.

Judi added: “When they haven’t clasped hands, though, their brushing of hands has looked like an intentional gesture, a truncated or mimed hand clasp that reveals their desire to hold hands again where possible.

“Their hand touches or hand clasps have looked mutual, showing they are like-minded in their need for contact to help share the sadness and to offer signals of mutual support.” 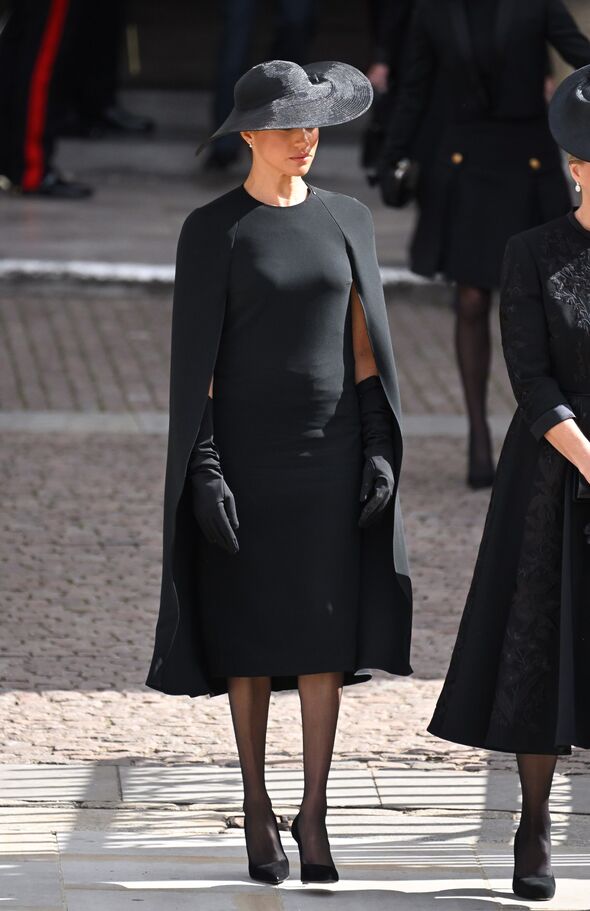 Meghan looked sophisticated and classy at the late Queen’s funeral.

She donned a Stella McCartney black cape dress, which she also owns in navy blue.

The Duchess was seen wearing the blue version at the Queen’s 92nd birthday, back in 2018.

Therefore, the dress showed Meghan’s “affection” for the Queen, according to royal fashion expert and author Elizabeth Holmes. 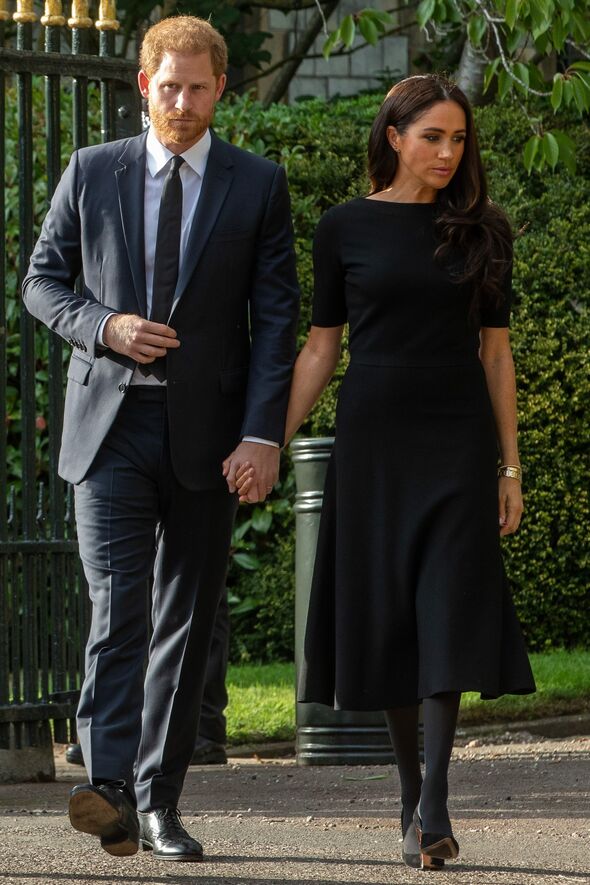 Elizabeth also noted how the hat Meghan wore for the funeral was also one she already owned – but in white.

Meghan donned the white Stephen Jones for Dior hat during the Platinum Jubilee celebrations in June earlier this year.

For the funeral, the Duchess paired the cape dress and hat with a pair of sheer black tights, black shoes, and minimal jewellery.

She wore her yellow gold Cartier bracelet and a pair of pearl earrings gifted to her by the Queen in 2018.