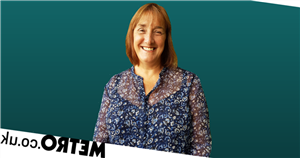 Paula Gibbons was sitting in a coffee shop where she lives in Northumberland, when she noticed a woman looking over.

At 53, she has worked with thousands of people in her work for social services, and didn’t initially recognise the person glancing over.

It was then that the woman said she’d been one of Paula’s adopters many years ago.

‘Then she sort of stepped to the side, and this 16-year-old strapping lad was standing there,’ remembers Paula.

‘He looked a bit embarrassed – you know how they do at that age. Then she said “this is Johnny who came to live with us”, and I just got goosebumps all over.

‘It’s just amazing to think that have a small part in people’s lives.’

Mum-of-one Paula has worked in fostering and adoption for over 25 years, and has been instrumental (although she’d be too modest to admit it) in finding homes for over 1,000 children; more than 40 per year.

She always knew she wanted to care for others, realising her career path after a work experience placement as a home help.

‘With hindsight now, I think that was one of the the triggers to wanting to get into a healthcare profession,’ she tells Metro.co.uk.

‘I suppose I could have been a nurse. I’d watch Casualty and think “I could to that” – but on balance I’m probably not that great with blood!

‘It might sound trite, but I was always drawn to doing something that’s about making a difference.’

From that work experience placement, Paula trained as a social worker, starting in family placement (now called fostering and adoption) straight after qualifying, before going on to hold a number of roles in the department.

It’s not the amount of children she’s helped that matters to Paula, though. For her, it’s more about ensuring each child is well looked after and flourishing.

She says: ‘The biggest thing for me was always – as it is for all of us – the children, and and seeing how they develop and progress.’

Paula has kept in touch with some of the adoptive and foster parents she’s worked with over the years, and gets updates from them that reinforce her commitment to social work.

‘I was really lucky,’ says Paula. ‘I’ve had some amazing carers who tell me about the 25-year-olds they’d fostered [as kids], who still come back for Sunday lunch.

‘I also have one foster carer who has become a friend since she retired in 2009.

‘A young girl who she fostered as a teenager – and had some challenging experiences – now comes back with her own daughter. Although I don’t see her, I see photographs and think “that’s why we all do it”.’

Currently working as Head of Service for one of Adopt Coast to Coast’s Regional Adoption Agencies, Paula’s role has shifted from direct work with families to focusing on procedure and accessibility.

One of the things she’s noticed through her decades in the field is how many potential adopters are put off by myths over who can and can’t adopt.

‘People still think we have some sort of model of what an adoptive parent should look like, and if you don’t fit that you’re out.

Adopting is a life-changing event for both parent and child, but it’s also shrouded in mystery for many of us.

Potential adoptive parents may (understandably) approach agencies cautiously, and this trepidation is only exacerbated by misconceptions around the process.

Paula’s aim is to demystify adoption, in the hope that those considering it won’t be put off before they even begin their journeys.

She explains that one thing there’s confusion round is the length of time it takes to adopt, as many assume they’ll have to go through years of vetting and monitoring before being matched with a child.

‘At Adopt Coast To Coast, what we’re seeing is that a lot of our adopters, from when starting stage one to getting a child can be as little as a year.’

‘We had a gay couple who went to panel on the Wednesday – and I personally phoned them on Friday to say “we’ve got a hospital-to-adoption baby, are you interested?”‘

They were, and Paula took the couple to the hospital to be introduced. Five days later they took their baby home, something that’s apparently ‘not a rare case’.

Like this couple, many prospective adopters also ask to be matched with babies or young children.

This can mean older children are harder to place with families, particularly if they need to be adopted with their siblings. Children with disabilities and those from Black, Asian and minority ethnic (BAME) backgrounds are also less likely to be adopted.

‘Often people will come in with preconceived ideas for whatever reason,’ says Paula, adding, ‘I think people make assumptions that because a child’s placed younger, that they’re not going to have the same level of behavioural issues when they’re older.’

Previous trauma can of course affect a child’s behaviour and the adoptive home they’re best suited to. However, as Paula points out, ‘none of us know our child or children’s future’.

Every parent – biological or not – should be aware that it’s impossible to predict a youngster’s personality or the challenges they may face as they grow up.

Adoptive parents have the ability to speak with their adoption agency or local authority if they’re struggling, and Paula urges people to ask for help as soon as they need it.

She believes people are scared to ask for help because they’re frightened by they stereotypical idea that social workers’ aim is to remove kids from homes.

Paula says: ‘If that’s the myth about social workers, and if people think we do that, you can imagine an adopter might think, “if I tell them I’m struggling, they might do something that I don’t want them to do”.’

In reality, though, the adoption process is designed to be holistic rather than prescriptive, as evidenced by Adoption UK stats whereby 90% of adopters in 2021 said their social worker was understanding and supportive to their needs.

Everything is assessed on a case-by-case basis, and you won’t be disqualified from adopting because of a tick-box list. If you have a high BMI, are a smoker, or have a disability (three common reasons people believe they won’t be accepted to adopt) there will not be a single deciding factor in authorities’ decisions.

Paula says that it’s an overall ability to give a child a loving and safe home that is what social workers and adoption agencies will be looking for.

And throughout the journey, staff like Paula will be behind the scenes ensuring families are well-matched and supporting children finding their forever home.

‘I’ve got a son, and my aim was always that the children that I was involved with should have the same opportunities and experiences he has,’ she says.

‘And as corporate parents – which is what councils and agencies are – it’s our responsibility to give them the best we can, so that we get them all the life skills that you would want your children.’

October 18-23 marks National Adoption Week, a campaign which aims to highlight and champion all aspects of adoption.