Getting up in the early hours of the morning on Christmas Day will be familiar to many tired parents with overexcited children.

But while the rest of us are tucking into our first segment of chocolate orange, photographer James Richardson is up with the lark for an entirely different reason.

Every morning – come rain or shine – James, 36, takes his camera equipment down to the seafront in Penarth, South Wales.

He’s there taking pictures of the Dawnstalkers, a sea swim club who, you guessed it, gathers at dawn for a dip. And this Christmas Day is no different.

So dedicated has he become to capturing the swimmers, that James wades into the water too – his camera held aloft from the salty seas.

An early morning swim in the height of summer might sound like a wonderful start to the day, but during winter, temperatures in the water can drop to below 7C. 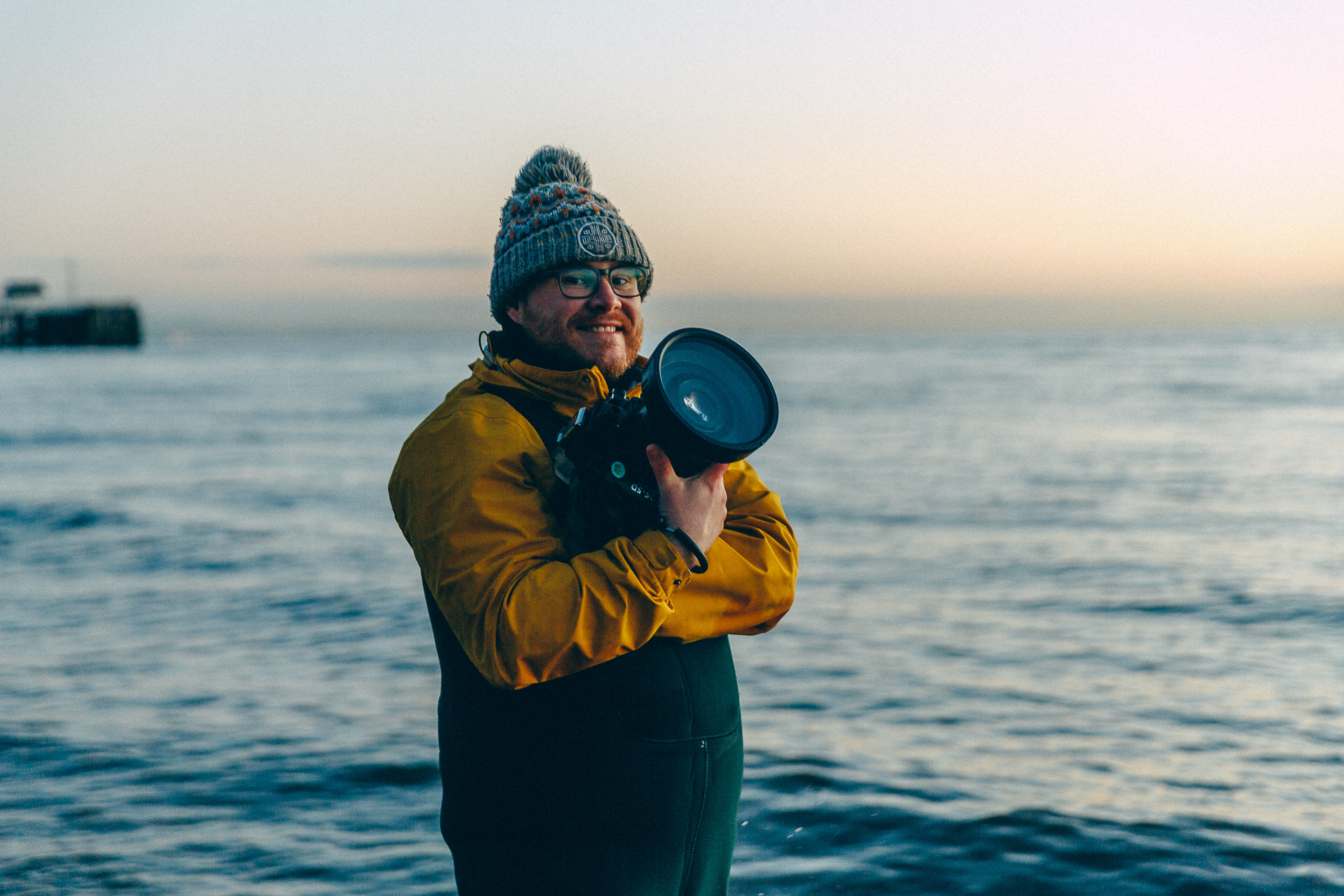 At that temperature, if a person suddenly enters the water, they’ll experience ‘cold water shock.’ You hyperventilate, your blood pressure shoots up and, in extreme cases, you can loose muscle control to the point where you can no longer swim.

But those passionate about sea swimming will tell you that it’s an exhilarating experience, often citing the mental health benefits.

In 2018, the British Medical Journal published a report about using cold water swimming as a treatment for depression, explaining that it puts our bodies into fight-or-flight mode and helps us better adapt to stress.

And a 2020 study from Cambridge University also showed that neuro-degenerative diseases, such as dementia, may be slowed or even prevented from cold water swimming.

So it’s perhaps no surprise then that the Dawnstalkers gather on the beach on Christmas morning.

But for James, a native Penarthian, it’s a slightly different experience – mainly because he doesn’t actually join in on the swim.

He’s become the ‘official photographer’ of the group, although it’s an entirely voluntary position, one which he crafted for himself.

Speaking to Metro.co.uk, James said: ‘When I’m there, I’m taking pictures. If I do swim, I’ll go at a different time of the day. I very much feel like my responsibility is to take photos.

‘I feel a great sense of giving back to people, and the community.

‘I love that it’s such an inclusive space. There’s all types of people from all walks of life – from teenagers to retirees.

‘I’ve seen people get out of the sea in tears, because they feel so overwhelmed with emotion. This is a real passion project for me.’

And he’ll be there on Christmas morning too. He says: ‘Some people go down in Santa hats, and it’s just a lovely thing to do – especially if Christmas is hard for you.’

In fact, James has almost reached a staggering milestone – he’ll soon have headed down to the beach every day, camera in hand, for 500 days. And he’s become a recognisable figure in the group. While other members might wear swimming costumes or wetsuits – often with a woolly hat – James goes for a different vibe.

He says: ‘I wear neoprene waders and a yellow coat. I look a bit like a fisherman, but it means people recognise me and I sort of consider it my uniform.’

And if you’re wondering how cameras and the seas of the Bristol Channel mix, the answer is: not well.

‘I’ve learnt that the hard way,’ he laughs. ‘I’m on my fourth camera due to water damage. But I’ve finally invested in some high quality waterproof housing, so fingers crossed.’

The Dawnstalkers began back in January 2021. Co-founder, Grant Zehetmayr – who members affectionally call ‘the captain’ – was doing Dry January, and it was during that time he decided to start heading for the seas.

Around the same time, co-founder, Lene Hops, also began venturing into the water.

James explains: ‘If you’re from Penarth, you know that, back then, noone ever went in the sea – so it was very unusual sight.

‘I’d often get a coffee from Piotr Skoczylas, at Stol Coffee, on the seafront, and we’d watch them in the sea and chat about how mad they both were!

‘Eventually, Piotr introduced Grant and Lene to each other, and it kind of started from there.

‘Word spread and there was a core group of around 10 to 15 swimmers, with my ex-partner being one of them. She’d often encourage me to come down to the beach – but I’d have rather stayed in bed!

‘It took me until April to go down myself. That first day, it sort of took my breathe away. The sunrise is beautiful, and you could hear the laughter of people in the sea.

‘I just felt like I had a duty to photograph what was going on.’

That first week in April, James went down to the beach three times – the next week, four. Soon, he was going every single day.

‘You’ve got to remember that this was also in winter, in a Covid lockdown,’ says James. ‘It was a community being built outdoors, locally, and it didn’t cost a thing.

‘A lot of people were swimming and opening up about their mental health. It was – and still is – a place you could come to without any judgement.’

In winter, the swimmers get a bit of a lie in, with first light sometimes being as late as 7.30am. But in summer, James can get up as early as 3.45am.

‘It’s definitely affected my social life,’ he says. ‘I have to go to bed really early!’

And being on the sidelines hasn’t stopped James from forming real connections within the group.

He says: ‘I like being slightly separate as I get to look at things from a different angle which is great from a photography point of view, but I still manage to make connections.

‘When I take pictures of people, I have conversations with them, because they’re in quite a vulnerable position. They’re generally not wearing many clothes, they’re quite cold – so I always engage with them.

‘There’s also the aspect afterwards of having a coffee with Piotr and the rest of the club. I’ve made some lifelong friends from this group, which is fantastic.

‘I’m on the sidelines, but I definitely still feel part of the community – even if I have a slightly different role. And if there is ever a day when I’m not there, people will tell me it feels different when I’m not around.

‘I’m 50/50 an introvert and extrovert. I love being with people, but I have to recharge after. My role within the group means I can do both – I get be part of the community of swimmers, and also step back a little bit.’

So what keeps James coming back, day after day?

He says: ‘From a creative point of view, I get so much satisfaction out of it. Every single day is different. There’s an array of different colours – from pinks and purples, to blues and yellows.

‘The cloud coverage, the weather, and the light means you’re always capturing something unique.

‘In November this year, I was fortunate to have an exhibition of my photos in Penarth – that was amazing, my photos have never been displayed anywhere before.’

But it’s the sense of community that is the real draw. He says: ‘I’ve realised over the course of the 500 trips down there, that it’s the people I’m there for.

‘I often get messages from people saying thank you for taking their photos – that they didn’t realise they could look so happy.

‘It’s wonderful to see people in their element – leaving all the baggage behind and being in the moment.

‘If it wasn’t for the people, I wouldn’t bother.’