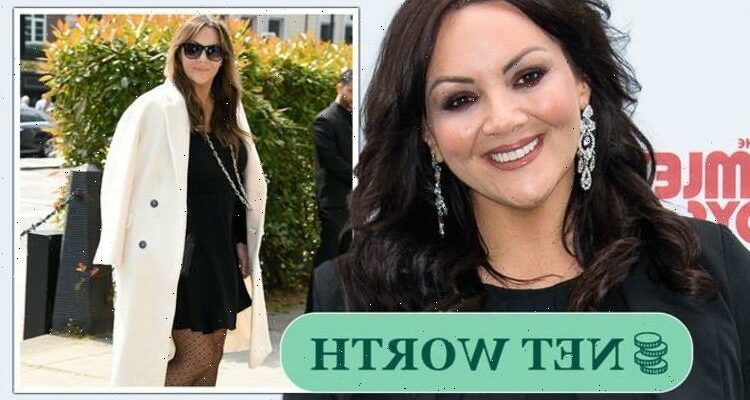 Martine McCutcheon is best known for her role as Tiffany Mitchell in EastEnders and as Hugh Grant’s love interest, Natalie, in Richard Curtis’ Love Actually. Since then, Martine has appeared on The Masked Singer UK and Celebrity Gogglebox, among other popular TV programmes.

Although it is not clear how much Martine currently earns, the actor’s net worth is thought to be anything from $11million to $13million, according to celebrity sites.

This is a huge sum that’s equivalent to £8million and £9.5million.

Martine’s fortune has accumulated over the years thanks to her successful career in TV and film.

However, the actor’s childhood was worlds away from her current life.

Born in Hackney in 1976, Martine showed a fondness for acting even as a young girl.

She attended Shacklewell Infants’ School in Hackney, where she performed her first play, Away in a Manger, and later acted in more plays at primary school.

At the age of five, she started dance classes and enrolled in a dance school in Stoke Newington.

She was later awarded a grant to train at the Italia Conti Academy of Theatre Arts.

Martine obtained her first acting role at the age of 12, when she appeared in an American TV advertisement for the drink Kool-Aid.

She went on to play the role of Mandy in the 1989 TV show Bluebirds, alongside Barbara Windsor.

Next, she appeared on ITV police drama The Bill, before being offered the part of Tiffany Raymond on BBC’s EastEnders in 1994.

This role rocketed Martine to fame and up to 22million viewers tuned in to see her act her final scenes in 1998, when Tiffany was killed off.

The episode was screened on New Year’s Eve.

Martine had decided to leave the soap opera to embark on a pop career.

Her singles started to appear in the UK charts from 1995 and, by 1999, she had a number one single with the tune ‘Perfect Moment’.

Her album ‘You Me & Us’ peaked at number two on the UK Albums Chart.

In 2000, Martine was even nominated for a Brit Award for Best Pop Act.

After her iconic four-year stint in EastEnders, the actor’s next biggest role was as Number 10 tea lady Natalie in Richard Curtis’ romantic-comedy Love Actually.

After appearances in ITV’s The English Harem and Agatha Christie’s Marple TV series, among others, Martine landed a job as a panelist on popular daytime show Loose Women.

The actor and singer’s most recent roles include competing on the second series of The Masked Singer UK as Swan earlier this year, and appearing on Celebrity Gogglebox.

Martine is also the author of two books, Who Does She Think She Is? and Martine McCutcheon: Behind the Scenes – A Personal Diary.

The 45-year-old married singer Jack McManus in 2012 and, in February 2015, the couple welcomed baby boy Rafferty to the world.

The family of three live in Surrey.