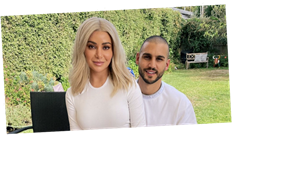 Martha Kalifatidis first laid eyes on boyfriend Michael Brunelli when he was waiting for her at the altar, in a moment televised across Australia.

Three years on the couple are still together, and many in the UK have recently watched their love story unfurl on Married At First Sight.

That union, perhaps unsurprisingly, was not legally binding, and took place purely for experimental and entertainment purposes.

However, speaking exclusively to OK! Online, Martha, 32, has revealed that a wedding could soon be happening between her and her fitness entrepreneur beau.

When asked if she still calls Michael her husband, the former makeup artist replied: “No, he is my boyfriend. Which I think is quite a cute title that I’m not mad about at all.”

Yet Martha did hint at the possibility of exchanging nuptials with her man, telling us: “I think there may be a wedding on the cards but I guess that’s a question you’ll have to ask Michael!”

Are you part of The OK! VIP Club? If not, why not? It’s free and gives you backstage access to stories like this, exclusive home tours, special discounts and so much more!

The social media influencer, who currently has over 584k followers, went on to add their relationship had gone from “strength to strength” and she feels “like the luckiest girl with him.”

Despite this happy ending, Martha also opened up on how the aftermath of the reality show was not as plain sailing.

When asked about her regrets the make up artist said: “Today I don’t, but it’s three years on and hindsight is a beautiful thing. While the show was airing… well that’s a different story. I regretted the entire thing!”

Becoming famous overnight is no small feat, and although Martha was keen to stress that the MAFSA did “take after care seriously” there were other obstacles to overcome.

She continued: “I think that what the contestants go through is so traumatic and polarising that afterwards they feel they can’t trust anyone.

"How can you trust the people who put you in that position in the first place, is usually the mentality of people coming off reality TV.

“I was so hyper vigilant after the show, I just couldn’t relax. At the time I didn’t want to talk to anyone about what I was feeling, apart from the other contestants. And I definitely didn’t want to speak with the psychologist on the MAFS payroll.”

The Bondi-based star went on to explain that appearing on the show “isolates you” and can make you distanced from loved ones.

She said: “You become distanced from your friends and family because it feels like no one can understand you, since they haven’t experienced it themselves.

“Which then isolates you even more, and then it becomes a viscous cycle. It is important to have a strong support system, whatever and whoever that is.”